How to construct a sky map

First of all, I have very basic knowledge of astronomy so sorry if I make some mistakes in my terminology.

I'd like to plot the Southern Cross. I can find the name of its 5 stars. Also, I have some knowledge of Python and I've tried to use PyEphem and AstroPy.

What I don't know is: what kind of information do I need to plot the cross on the circle? I mean, I'd like to plot it exactly at the right position.

I tried to collect some info with the Astropy function FixedTarget.from_name() but, if I understood correctly, the date is too far in the past.

If anybody could give me some guidelines (maybe an online tool) to create a sky map with the cross in the right position, I'd really appreciate it.

There are a few details here that make this non-trivial. The year doesn't matter much, since the same stars are visible each year. Further, in Stellarium, you can set the date to 1889 so this is not an issue but we have to turn off atmospheric effects to make the stars visible.

More tricky is that the Brazilian flag is designed as if viewed "from above". We can flip the image from Stellarium to simulate this.

Now, the stars are on a globe and the flag is flat, so a projection is needed to represent it. It's not clear what projection the flag designers used, but perhaps it is "orthographic". Stellarium can do that projection.

The projection also seems to be slanted, so "north-south" isn't vertical, although it's not clear by how much. We can estimate this slant from the position of the equator.

So here is an image of the sky from Rio. The Southern Cross is visible towards the bottom of the image. 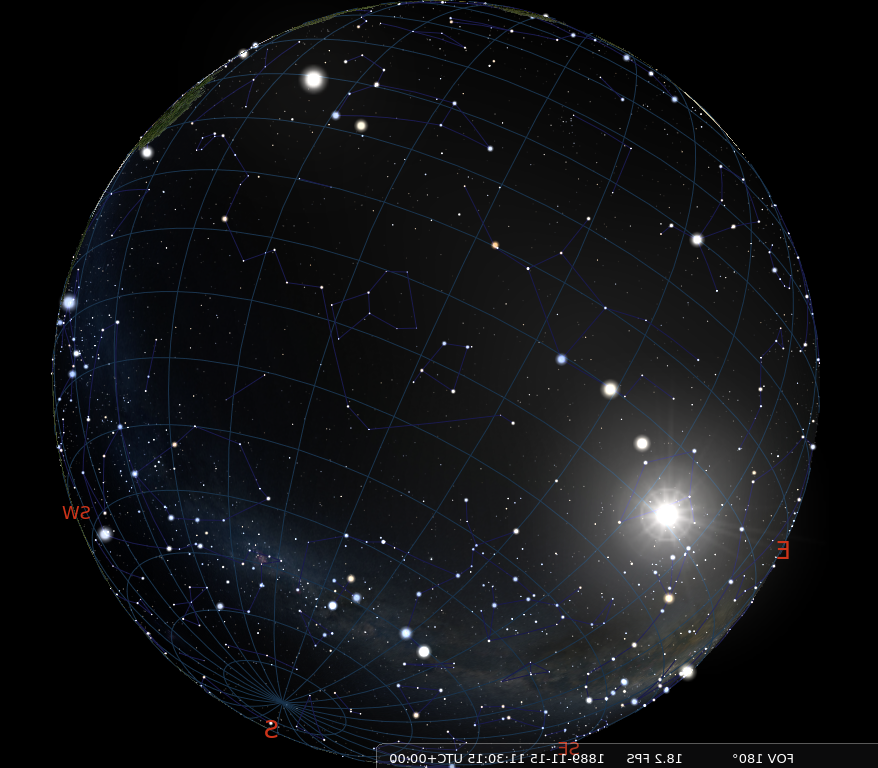 If you want to do this yourself in Pyephem you can create a "fixed body" object for each star (Pyephem has a catalogue of brighter stars), create an observer in Rio, and call "body.compute(observer)" which will calculate the azimuth and altitude of the star. Their orthographic projection is then the application of the formulas found on Wikipedia, and you can plot that using any plotting package.

Not the answer you're looking for? Browse other questions tagged star amateur-observing positional-astronomy python .

2
Brightest star of the night sky
0
SDSS. Google Sky and DeCaLs
1
Create a signal to noise map from heatmap
8
Generate a uniform distribution on the sky
2
Converting FITS (NuSTAR) coordinates to WCS
3
Star map - finding stars
4
How do I make a custom pulsar map?