This page on Wikipedia -- Quasars mentions that the "The largest known [quasar] is estimated to consume matter equivalent to 600 Earths per minute". However, there is no citation for this comment. How can I find out where this information came from? I've commented in the Talk section for the page.

Tricky to say for sure, but I would imagine it comes about from measurements of the luminosity and inference of the black hole mass in such systems.

The most extreme objects radiate at the Eddington luminosity, where gravitational forces on matter falling into the black hole are balanced by radiation pressure from the heated material closer in.

The biggest supermassive black holes in the universe have $M \simeq 10^{10}M_{\odot}$ and thus the Eddington accretion rate for such objects is about $1.4\times 10^{25}$ kg/s or about 2.3 Earths/second or 140 Earths per minute. The difference between this estimate and the one on the wikipedia page could be what is assumed for the biggest $M$ or that $\epsilon$ is a bit smaller than 0.1 or indeed that the luminosity could exceed the Eddington luminosity (because the accretion isn't spherical).

So perhaps the number on the wikipedia page is a little exaggerated.

It's the largest recorded quasar, I don't know the figure for the largest theoretical quasar, there are apparently hundreds of people theorizing and debating the theoretical maximum. 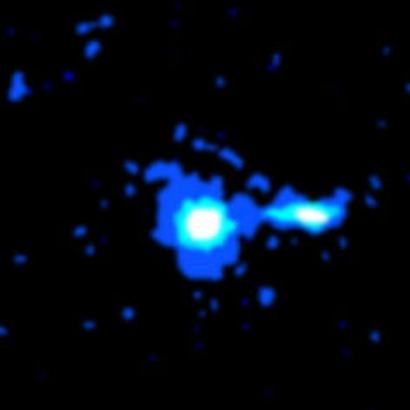 Not the answer you're looking for? Browse other questions tagged quasars accretion-discs .

3
What fractions of matter are retained and displaced by quasars?

8
Difference between quasar and Active Galactic Nuclei?
1
What is the mass limit in a stellar accretion disc?
3
Spherical Accretion (Bondi Model)
2
Quasar Redshifts
2
What enhances the capture and merge rates of pairs of small black holes orbiting around supermassive black holes?
2
How do accretion disks around black holes evaporate via winds?
1
Speeds in accretion disks