Secondary maximum in SNIa lightcurves for near infrared

Type Ia supernovae (SNIa) are thermonuclear supernovae that generates a lot of Nickel 56 which emits photons while disintegrating.

How is the secondary maximum in lightcurves for reddish bands (see I, J, H, K bands in the figure below) explained ? 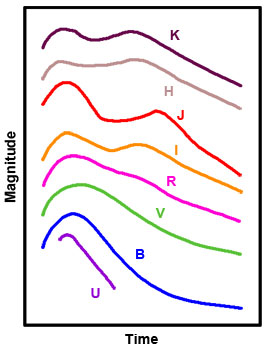 The main power driving a supernova (of type Ia) light curve is the explosive detonation of a carbon/oxygen white dwarf. This produces a large amount of iron-peak elements (particularly Ni) via nuclear fusion of carbon, oxygen and alpha particles via magnesium, neon, sulphur and silicon.

However, as you have noticed, in the (rest-frame) infrared part of the spectrum, there is a secondary peak.

Now, whilst the emission in the visible part of the spectrum is largely of a thermal continuum nature (the ejecta are typically at temperatures of $\sim$10,000K during the early parts of the decay), the infrared portion can be dominated (and certainly is after $>20$ days) by line emission (that is then smeared out by turbulent doppler broadening).

The species that emit this radiation are ionised iron-peak elements (mainly cobalt and iron). As the ejecta cools, the species that are present recapture electrons, becoming less ionised. At around 7000K there is a fairly abrupt transition between the gas consisting of mainly doubly ionised species to mainly singly ionised species. This results in an order of magnitude increase in emissivity of the gas due to radiative recombination of the ions and electrons. It turns out that this radiation emerges mainly at near infrared wavelengths.

As the gas cools further and becomes wholly singly ionised, or even neutral, then the emissivity falls drastically again. There is therefore a "sweet spot" where the infrared emissivity of the ejecta is maximised, that occurs about 20-30 days after the explosion, that manifests itself as a secondary bump in the infrared light curves.

3
Searches for dipole form of anisotropies (on luminosity distances) in the universe with type Ia supernovae
31
Why don’t supergiants at least start to fuse nickel into even heavier elements before going supernova?
0
"Early" and "late" nomenclature regarding O, B & K, M stars
12
Is oxygen an alpha element?
6
The two channels of Type Ia SNe and their use as standard candles