Why is sunset on 21st of June not the latest?

Why is the sunset not the latest on 21 June, but only on 27 June. Purely geometrically regarding the orbit of the two celestial bodies this should not be like this?

Is there somewhere a good source, that explains this situation ?

It's explained in this Wikipedia article. Basically, the length of a day is defined by both the Earth's rotation itself and Earth orbiting around the sun. Because the Earth's orbit around the Sun isn't a circle but an ellipse (making it moving faster when it's closer to the Sun), and the Earth rotates in a plane different than it orbits the Sun, an apparent solar day isn't always 24 hours; in June, it's slightly longer. That means every day, "noon" (the time of day when the Sun is at its highest point) happens 'later' (compared to the time on your watch), so sunset (and sunrise) are also later. The first few days after June 21st, this effect is more significant than the effect of the Sun moving south (causing the day* to become shorter and the sunrise falling earlier). The same effect causes the earliest sunrise (in your location) to be on June 15th, so before the solstice.

*: day as in day vs. night, the period between sunrise and sunset, so not 24 hours

The reason the latest sunset occurs in late July just north of the equator has nothing to do with the change in the time from sunrise to sunset; there is very little variation in the portion of a day that is sunlit near the equator. The reason the latest sunset is in late July is instead because that is when solar noon is at its latest. Solar noon occurs later and later in the day in the weeks preceding late July, but then it reverses direction. There are four extrema of the timing of solar noon over the course of a year. Late July represents one of those four extrema.

The time at which solar noon occurs varies over the course of a year. This variation is a consequence of the Earth's axial tilt and the eccentricity of its orbit. Mathematically, this is described by the equation of time, depicted in the two graphs below. The first shows the cumulative effect; this is the "equation of time." The second graph shows how much local noon changes on a day-per-day basis. Negative values such as in mid May to late July indicate when solar noon occurs later than it did on the previous day. 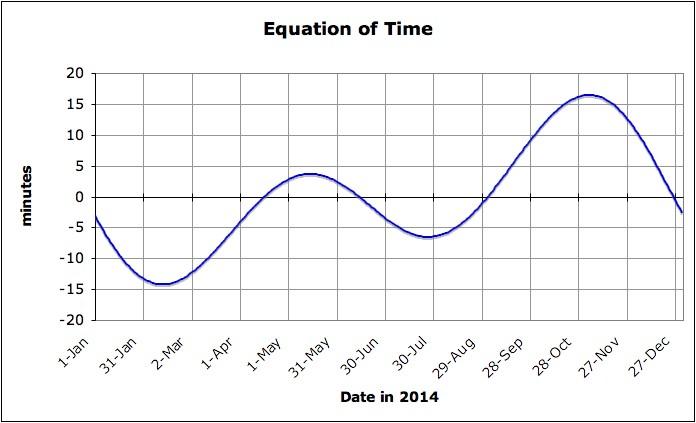 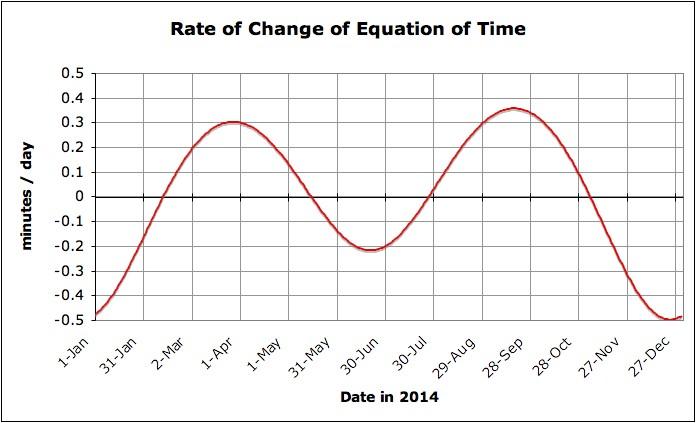 Not the answer you're looking for? Browse other questions tagged the-sun observational-astronomy or ask your own question.

8
How did astronomers first come to understand that the Sun's core was a gas?
3
What were the challenges for the ancients to observe the orbit of the Moon (instead of Mars)?
2
What is Color Index?
4
Is the Sun slightly blue in the center? - Wavelength-dependent limb darkening of the Sun
3
Equinox sunrise sunset direction
1
Why is the shadow of the earth not visible during sunsets?
2
Circumpolar Equation Derivation
7
Why is the sunset at different times at the same longitude at equinox?
3
Why wasn't CHEOPS data taken during passage through the South Atlantic Anomaly downlinked in this case, resulting in gaps in photometry?