What does it mean for a star to go nova or supernova? Can I safely observe these?

What does it mean for a star when people say it goes 'nova' or super nova, what are the differences?

More importantly, can I safely observe these with an amateur telescope? I imagine they would be big enough to spot should one happen! 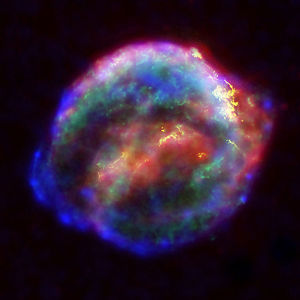 It's a matter of size and stellar evolution. There are many, many types of stellar explosions. The University of Arizona has one page that describes these types. Generally, a Nova is not what we think of (i.e. a star exploding). That's actually a Type II Supernova.

According to that site:

Novae are frequently (perhaps always) members of binary systems where the more massive star evolves more quickly and becomes a white dwarf. The less massive star loses some of its hydrogen-rich outer atmosphere to the white dwarf where it collects. The high gravity and intense heat of the white dwarf make conditions suitable for hydrogen fusion into helium. When enough hydrogen collects, it explodes in a fusion reaction, causing a nova. The gas ejected in the explosion moves outwards at 1000-2000 km/sec.

There are (at least) two distinct types of supernovae:

The "Type I" supernovae arise when the white dwarf star member of a binary system accretes so much matter from its companion that it is tipped over the 1.4M Chandrasekar limit. The white dwarf collapses very rapidly (just a few seconds) until the infalling layers hit the very hard surface of the neutron star. The resulting shock goes back through the collapsing layers, and they explode by hydrogen fusion.

And the one we are more familiar with from popular media:

Portland Community College actually lists a lot of the variations that happen in the different types of supernovas out there.

Type II The type II supernovae are massive stars whose iron cores collapse and then rebound, shock heating the outer layers of the star, which then explode outward.

As for observing them, since none of them are expected to be close to us (i.e. no stars near us able to go supernova), it should be safe. The problem is predicting when one will happen. For instance, Betelgeuse is expected to go supernova "soon", but in stellar terms, that could be well over 100,000 years from now. The list of candidates in the Milky Way doesn't bode well for one in your lifetime. Although astronomers are often seeing them in other galaxies, and some are observable by amateur astronomers. In fact, just this past August (2013) an amateur discovered a nova.

A supernova has brightness rivaling its galaxy. If a supernova happens in a galaxy that galaxy will suddenly have a bright spot, if that happens within our galaxy it can even rival the brightness of the moon(unless its on the other side of the galaxy which we wont be able to see it due to the black hole in the middle though if we look at a different direction we can see it due to gravity but that will appear in 2 places and it will be odd(footnote 1)) Supernova in our galaxy can be seen in broad daylight as long as they aren't too close to the sun or ecclipsed by the moon. One time a hypernova happened in our local group and it could be seen in daylight. A supernova happens every few years in the galaxy though most are close to the center where its bright anyways because of the amount of stars orbiting there, dangerous supernova are very rare(footnote 2) and happen once in about 240 million years. A dangerous hypernova is equally rare(footnote 2.1), because hypernovas have a much larger danger range, but are much less common.

Don't worry no supernova can happen so brightly that it can be harmful to our eyes, even through a telescope. the only way it can harm us is by ionizing the atmosphere causing smog to kill off all the plants and everything else. The last time something really serious happened look its in my article from footnote 2 and yeah it wasn't that nice.

However if the sun were replaced by a star going supernova, it would be 9 orders of magnitude brighter than a hydrogen bomb detonated on your eye.

Basically for lots of supernovae you can just look outside and see them every night.

Footnote one: One memorial supernovae appeared in four places:https://www.scientificamerican.com/article/scientists-see-same-star-explode-4-times/

Footnote 2: Check my other answer for 2.1 it will be in the second last paragraph for 2.2 it is at the first paragraph Link: What's the safe distance from a hypernova?

10
What is a hypernova and have we observed any?
5
What's the safe distance from a hypernova?

10
What is a hypernova and have we observed any?
4
How massive does a main sequence star need to be to go type 1 supernova?
4
How bright can white dwarf stars glow as they accrete matter?
5
How does a planet lose mass to its host star?
4
Scientifically important discoveries with the help of amateurs
2
Can a supernova or a close passing star create a transient sun gravity focus "habitable zone"?
0
What is the bright star that never seems to move and sometimes the only star in sky?
3
Why does the gas cloud collapse in regions of high density?
4
Acronyms in astrophysics: is there a place that collects them all anywhere on the internet? And what does PSN mean on the TNS server?