bright bursts exploding from its surface twice in close succession — first on June 30, and then again about two weeks later, Sky and Telescope reported. As Hulk himself might say, "Comet flash!"

The linked Sky and Telescope article PanSTARRS Comet, Rocked by Outburst, Goes Green is dated July 17, 2018 and offers the tantallizing information that

Comet PanSTARRS (C/2017 S3) has erupted again! Now bright enough to see in binoculars, it might become a naked-eye object if it survives until perihelion.

Question: How bright is the comet now, and how is it predicted to behave in the next week or two (baring further outbursts)? 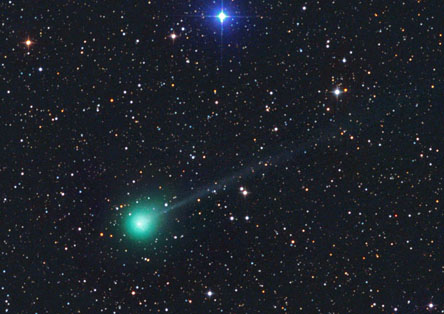 The solar elongation (angle from the Sun to the object) is about 15 degrees right now and decreasing as the comet moves in towards perihelion (closest approach to the Sun) on August 15. As James K says this means that comet is lost in the Sun's glare. Anything below 30 degrees solar elongation is tricky to impossible to see.

Assuming it survives the close perihelion passage of 0.21 AU, it is predicted to enter the field of view of the SOHO LASCO Sun-observing coronographs on August 24:

Assuming there is anything left of C/2017 S3, perihelion will occur this month on the 15th at a rather small perihelion distance of 0.21 AU. Being only 2 weeks from perihelion, it is already at a small elongation of 31 degrees on the 1st. Most observers will lose sight of it during the first week of August as its elongation drops below 25 degrees on the 4th and 20 degrees on the 6th. If the comet is still a going concern it will be visible in the SOHO LASCO C3 FOV between August 24 and September 13. The comet appear around the 7:30 position, passes to the east (left) of the Sun (halfway between the Sun and edge of FOV) and exits the FOV around the 12:30 position.

The above info is from the ALPO Comet Section. Latest LASCO image and movies are available here and many other places.

Not the answer you're looking for? Browse other questions tagged amateur-observing comets or ask your own question.

6
Can I see comet ISON from Saudi Arabia?
11
How can Halley's Comet be predictable?
6
How long does a comet “live”?
2
Observing Comet 45P - reliable sources of position data
3
Fact Check: How bright will the Perseids be in 2017?
13
Why would the Perseids meteor rate fall off after maximum faster than the increase before maximum?
1
Comet 289P/Blanpain sudden outburst?
1
How is Comet SWAN C/2020 F8 doing? Will it become easily visible by eye?
1
Seeing comet NEOWISE?