The formation of new stars as depicted in Feynman's lectures

I've stumbled upon this curious passage addressing the formation of stars in Feynman's lectures on physics:

Whether we have ever seen a star form or not is still debatable. Figure 7–12 shows the one piece of evidence which suggests that we have. At the left is a picture of a region of gas with some stars in it taken in 1947, and at the right is another picture, taken only 7 years later, which shows two new bright spots.

While I fully agree with Feynman's later note† that it's extremely unlikely that this picture shows stars forming, what does it actually show?

There is no reference to it, and no mention of filter used, the physical scale or even of the celestial object shown, and I've gotten rather curious as to what the seven-year change represents. Variable stars? Or is the displacement due to proper motions? Film artifact? Something else entirely? 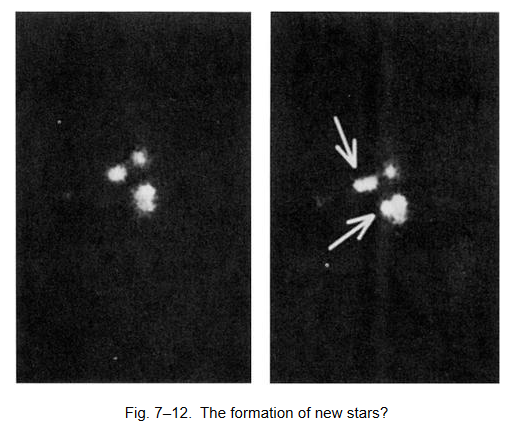 † Feynman concludes the paragraph with "[has the star formation somehow occurred?] Perhaps, and perhaps not. It is unreasonable that in only seven years we should be so lucky as to see a star change itself into visible form; it is much less probable that we should see two!" - indeed, the star formation rate of the whole Galaxy would be of this order!

imo, all the 5 stars are already present and with a little separation in the left image.
Their distance to Earth should have been investigated on the image of the right. The ones nearer could travel, proper motion, much faster than the ones on the background.
In short: they could be at large distances one from the others and it is a coincidence the fact that in the left image they are aligned. With zillions of stars out there the probability is not null.
There are very fast stars (VFS) for ex. US 708 (1200 km/s on WP e 708 km/s heliocentric radial velocity - Hirsch et al. 2005) not known at Feynman time.
The time of discovery of VFS was 2005 and 10 years later, Warren R, Brown et al, reported on the PROPER MOTIONS AND TRAJECTORIES FOR 16 EXTREME RUNAWAY AND HYPERVELOCITY STARS (2015).

EDIT ADD:
One thing that can be done is to use software enabled with Point Spread Function (PSF) to discriminate the number of sources and decide how many stars are in each of the images.
I will not do it because it takes time that I do not have.

There are several packages available, fi, DS9 (video: find a moving star), MAXIM DL, SExtractor. The images have to be scaned, eventually formated as FITS (python code) and if using SExtractor look at the procedure used by E. Bertin and M. Dennefeld (1997).
Search on youtube 'Detecting asteroids'

It could be caused by 2 rotating binary star systems. If the rotation rates are less than say 30 years then 7 years would show a significant movement of the bodies. I don't know how rare 2 rotating systems are so seeing both of these may be too rare to be practical.

Not the answer you're looking for? Browse other questions tagged star star-formation or ask your own question.

20
Will new stars stop forming at some point of time?
4
Formation of stars
3
What is star composition after formation
2
Star formation analogy
8
Which came first: Galaxies <=> Stars <=> Planets?
1
Why does star formation cease?
41
Are new stars less pure as generations go by?