How bright is Andromeda's center, in magnitudes per square arcminute or something similar?

I'd like to know how bright the Andromeda galaxy's core is as an extended object, not the total integrated brightness.

Ideally a contour map or scan across the center might show brightness in magnitudes per square arcminute or square arcsecond. Or a low power digital photo with some kind of brightness scale per pixel. Older images such as the one below are from emulsion and so if they are just scanned and uploaded they will not be linear.

I don't even know where to begin to look for such a thing. Thanks!

Below: "This picture shows M31 (NGC 224) and its small companions M32 (NGC 221), lower center, and NGC 205 (sometimes designated M110), to the upper right. The image was made by combining three separate frames derived from photographic plates taken in 1979 at the Burrell Schmidt telescope of the Warner and Swasey Observatory of Case Western Reserve University (CWRU)." From here. 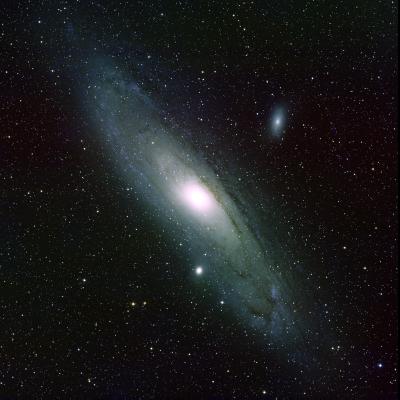 The surface brightness number depends on a few things: how large an area of the image is averaged, how close to the galactic nucleus it is, and in what wavelength band. Some papers give a brightness profile along a line bisecting the galaxy image.

Sandage, Becklin, and Neugebauer 1969 report, for a 7.6 arcsec diameter circle centered on the nucleus and measured in the $V$ band, a total magnitude of 11.3 and an average surface brightness of 15.5 mag/arcsec$^2$. The same aperture 30 arcsec east or west of the nucleus was 1.5 magnitude fainter.

Kent 1983 images the central bulge in the $r$ band and finds a surface brightness of 14 mag/arcsec$^2$ at the nucleus and 16 mag/arcsec$^2$ 10 arcsec away along the major axis of the galaxy image.

Walterbos and Kennicutt 1987 measure a 60 arcsecond circle and find a surface brightness, 1 arcminute away from the nucleus along the major axis, of 18.5 mag/arcsec$^2$ in the $B$ band.

Not the answer you're looking for? Browse other questions tagged galaxy photometry or ask your own question.

5
Is it possible to view the Andromeda galaxy with the naked eye in Greece?

8
How does the concept of a universe with no center work?
14
What is this bright "glow" in the center of galaxies?
5
How bright is the Crab Pulsar's 30 Hz modulation in visible light? What color is it?
2
How many stars are there max and average per galaxy?
1
How to approximate the distance at which the thin disk peaks along a given LOS from Earth for a given galactic coordinate per 1 sq deg?
1
how to find the approximate [stellar radius]? (distance from center to most distant star) of a circular flat disk galaxy based on its stellar mass?
4
How does a galaxy in Abell 2261 exist without a black hole in the center?
3
How to convert between AB and Vega magnitudes?