If the Higgs field only formed after the Big Bang, how was hydrogen formed?

These two statements seem to conflict, but since we're here they can't:

However, the Higgs field theory states that the field was only created AFTER the Big Bang. This implies that all particles from which hydrogen could be formed were massless. Hydrogen consists of 2 charged particles.

If you could provide an answer without complex math I would really appreciate it.

Hydrogen was not "created at the moment of the big bang".

Particles (leptons and quarks) can attain mass via the Higgs field after the epoch of electroweak symmetry breaking, that occurred about a picosecond $(10^{-12}$s) after the big bang. Only after this was it possible to form the building blocks of hydrogen.

In fact the formation of stable protons comes "much" later at about a millionth of a second. Most of the mass of a proton does not come about from the Higgs field, but from the binding energy of its constituent quarks.

Hydrogen (the atom, rather than the proton nucleus) forms much, much later; about 400,000 years after the big bang.

After the Big Bang, matter has formed in many steps. These are calles epoches. 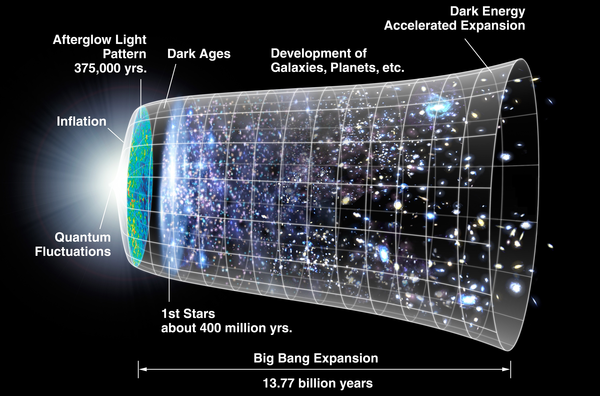 Their length grows typically exponentially. A more detailed description can you read here.

The Higgs field always existed, but its value were different. In the very early times, around between $10^{-43}$ and $10^{-36}$ seconds (see Grand unification epoch), its value could change, just like like electromagnetic field can change. Since then, its value is its current one.

For atomic hydrogen, we need

It happened much-much later, around 300000 year after the Big Bang. Before that, atomic hydrogen couldn't exist, it was too warm for that.

A remark: the visible hydrogen of the stars is still not atomic hydrogen, because the stars are still too hot for it to exist. It is in plasma state, a mixture of protons of electrons, without atomic hydrogen.

Your basic assumption that Hydrogen was created at the Big Bang is wrong.

The first protons did not appear until the Hadron Epoch when the temperature of the universe was "low" enough to allow quarks to bind together into, among other things, protons.

Hydrogen is an atom formed from an electron and a proton and optional neutrons (for Deuterium and Tritium isotopes of Hydrogen). These did not form until the Recombination Epoch when temperatures had cooled enough to allow electrons to bind with protons to form Hydrogen atoms.

That's an interesting point and there is an interesting question on Physics SE about this. There are arguments for saying it is not impossible on theoretical grounds, but also arguments for saying that we haven't seen them so they don't exist. Suffice to say that the statement you make is subject to ongoing debate and probably a good one to start an argument between particle physicists at parties (assuming you ever see a particle physicist in the wild, let alone at a party :-)).

Not the answer you're looking for? Browse other questions tagged big-bang-theory hydrogen or ask your own question.

0
How was all the matter curled up inside a singularity during big bang ?
3
What was “space” like before big bang?
2
Cosmic microwave background radiation: why did it take so long to get here?
1
Was Milky Way formed after Sagittarius A Explosion?
2
How could the universe be a few light years across just 1 second after the big bang?
2
Just after the Big Bang, was the space, in its entirety, filled with Hot gas?
3
How could time only have started with the Big Bang?