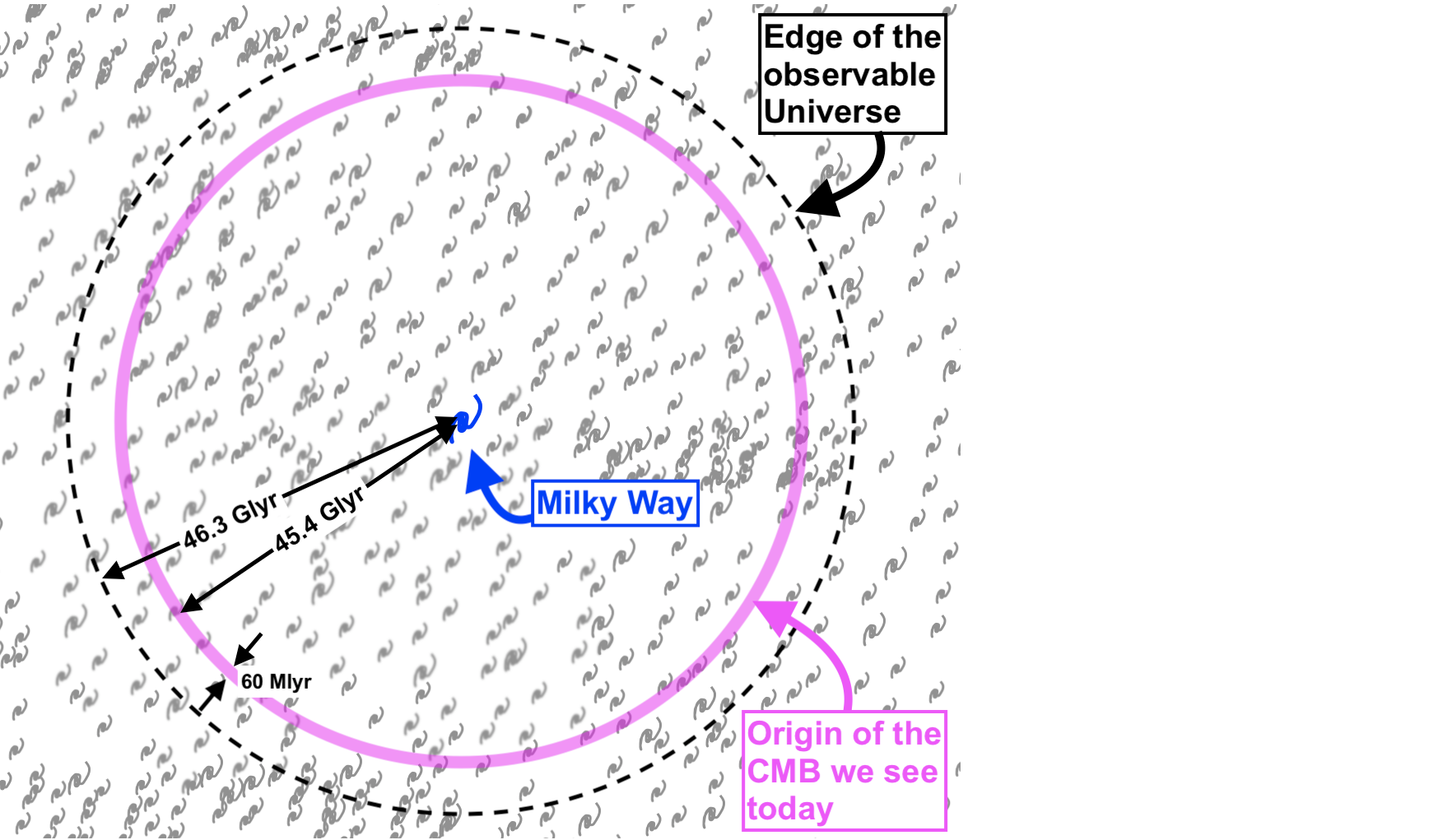 The comoving radius of the sphere of matter that we see as the CMBR can be calculated from measured cosmological parameters, and is around 46 billion light years.

The comoving size encompassed by our past light cone back to the beginning of time is not known, but it has to be much larger—at least hundreds of billions of light years across, and potentially vastly larger.

If you calculate the comoving radius of the observable universe back to the end of inflation in ΛCDM cosmology (or back to the non-inflationary big bang—the difference is negligible), then you get a value only slightly larger than the CMBR radius (less than a billion light years more). That's actually a problem, known as the horizon problem.

As shown in this picture from the Wikipedia article, if the maximum distance that light (or anything else) can have traveled between the big bang and CMBR emission is small, then the causal pasts of distant points in the CMBR sphere have nothing in common, so there's no reason why the CMBR should be as uniform as it's observed to be.

To solve this problem, you need the past light cones of the distant points to overlap substantially. If you imagine that antipodal points should have 99% overlap of their pasts to explain the homogeneity of the CMBR (I don't know whether that's at all reasonable!), then the comoving radius of their causal pasts needs to be around $\sqrt{100/2}$ times the radius of the CMBR sphere, i.e., ~300 billion light years in present-day comoving distance.

You may have noticed an error here: the causal pasts are only nice circles/spheres if the universe is homogeneous and isotropic, but if it is, then there's nothing to explain. This also affects diagrams like the one in the Wikipedia article: the small circles shouldn't be circular. But the argument is essentially unchanged, just fuzzier. The main takeaway is that the total region encompassed by our past light cone must be a lot larger than the CMBR sphere, not just slightly larger.

Inflation solves this problem by having very large past light cones. If it lasts for 60 e-folds, which is commonly quoted as the minimum possible to explain the observed homogeneity, then the comoving light travel distance during inflation is around $e^{60}\approx 10^{26}$ times larger than in the radiation-dominated big bang model. This huge blowup applies only to a tiny fraction of a second of expansion in the radiation-dominated model, not 380,000 years worth, but it is still enough to greatly increase the total area covered by the past light cone. This is only a lower bound on the number of e-folds; inflation can easily generate enormously larger homogeneous regions. So the size of our past light cone really is unknown.