How does this telescope work, and what is it for?

Procrastinating, I clicked on a suggested video (How Large Can a Telescope Be?) and after about 01:20 I saw a clip of a telescope shown below.

I was confused as I saw the reflections in the mirror until I decided that there are actually two small objects in front of the primary mirror, one far from the primary where you'd expect to see a secondary, which I've labeled "A", and one very close to the primary, which I have labeled "B".

Both are supported by four vanes, and there does not seem to be a hole in the primary.

I've labeled the reflected image of the back side of B as B' (B prime), and I've indicated the reflections of an "A vane" and a "B vane" with arrows.

But "A" looks very small compared to what I'd expect, only perhaps a few percent of the primary's diameter, and it looks like the telescope is not in a conventional dome, but perhaps has only a sliding or otherwise openable roof (currently off screen) to protect it when not in use.

Question: How does this telescope work, and what is it for? Is it for imaging, or performing some other function? 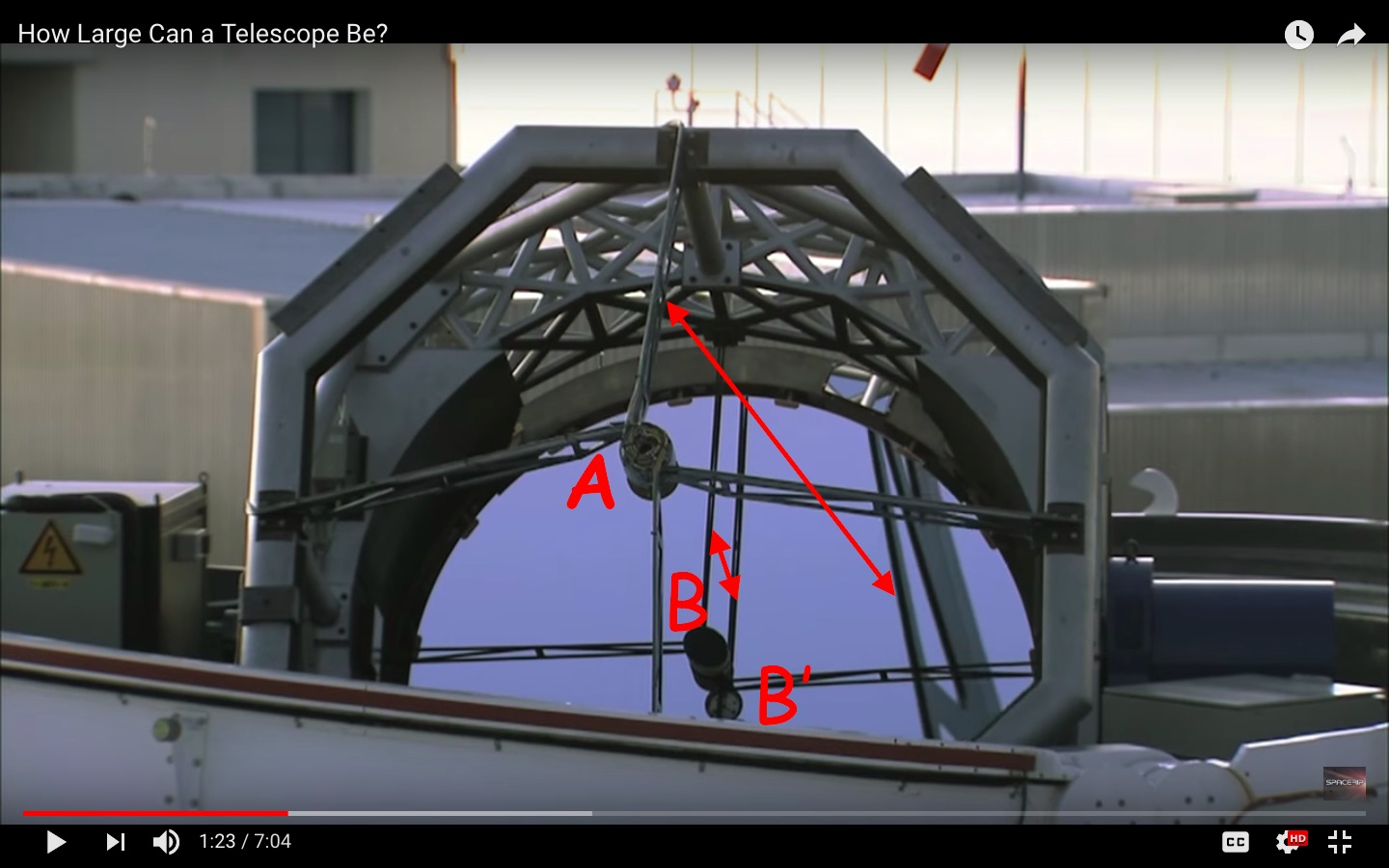 I'm pretty sure this is one of the four auxiliary (or "outrigger") telescopes for the European Southern Observatory's Very Large Telescope Interferometer, part of the VLT complex at Paranal Observatory in Chile. It's used in conjunction with the four main 8 m ("unit") telescopes in an optical/infrared interferometric system, so its purpose is to send images of the sky in the optical or near-IR to be combined with images from the unit telescopes and the other auxiliary telescopes (via underground tunnels) in the interferometric system. (The octagonal gray frame is kind of a giveaway, and the fact that this video is ESO-based helps confirm this.)

(Note that, per the link above, the primary mirror in each auxiliary telescope has a diameter of 1.8 m, while the secondary mirror is only 0.14 m -- very small, as you guessed.)

(Sometimes there is a hole in the primary, and the tertiary sits on top of a small "tower" that protrudes up through the hole from behind the primary; this would help disguise the existence of the hole. That's how the tertiary mirrors in the 8 m unit telescopes of the VLT work, though I don't think they have support vanes the way this one does. The existence of the support vanes and the nature of the B' reflection suggests there really isn't a hole in the primary here.)

The "dome" is an example of a "clamshell" design, in which two halves fold down out of the way; you can see one of the two hinges in the front, near the bottom right of your images. If you google for images of these telescopes, you can see them in the daytime, folded-up configuration.

Here's an image of one of the telescopes when it was still in the factory (before the mirrors were installed), which may help you understand the design better: 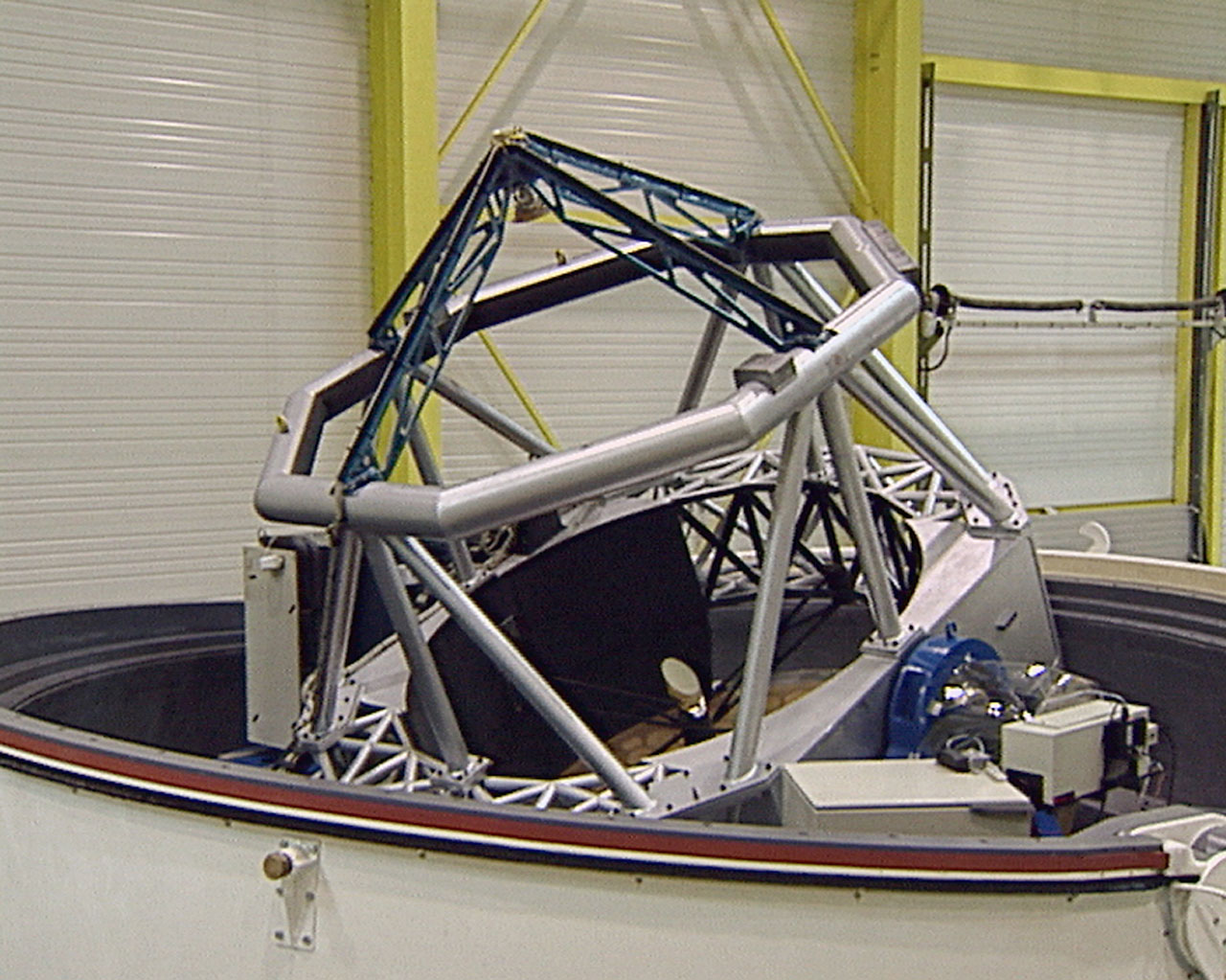 Not the answer you're looking for? Browse other questions tagged telescope observatory or ask your own question.

2
Do triple or more times reflecting telescopes exist?
3
Are they really sure this isn't an Airy disk? How was that ruled out?

14
How Does a Refractor Telescope Work?
5
How does a Bahtinov mask work?
2
Why can't I see Mars clearly?
6
Telescope collimation issue
1
What telescope is this, and how does it work?
2
what can I see with this telescope?
6
Why not use only one support vane for the secondary mirror, to avoid multiple diffraction spikes?
0
Which Lowell Observatory telescope is this? (used to draw Moon maps for the Apollo program)
1
Why does this Lowell Observatory telescope have so many knobs? What do they all do?
6
Could someone explain what is wrong with my telescope, and what should I be able to see with it?