Are there any known major events around the 50-60 million years preceding the cambrian explosion that could explain the sudden increase in biodiversity? Specifically a supernova, or active galactic center either in the milky way or some other nearby galaxy?

There was japanese research into nebula winters, to find correlation of weather records with starbusts, dark bok clouds and supernovae: 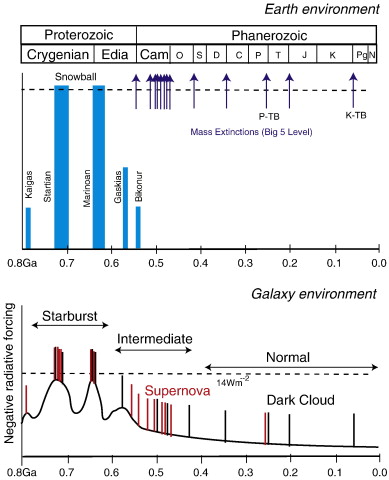 A global winter caused by a proto-stellar clouds, called bok globules, is possible too, because there may be 100 times more of them than we can see, they are abot 1ly diameter and 2-50 solar masses, completely dark. Perhaps they would dim the sun by at least 10-40 percent. 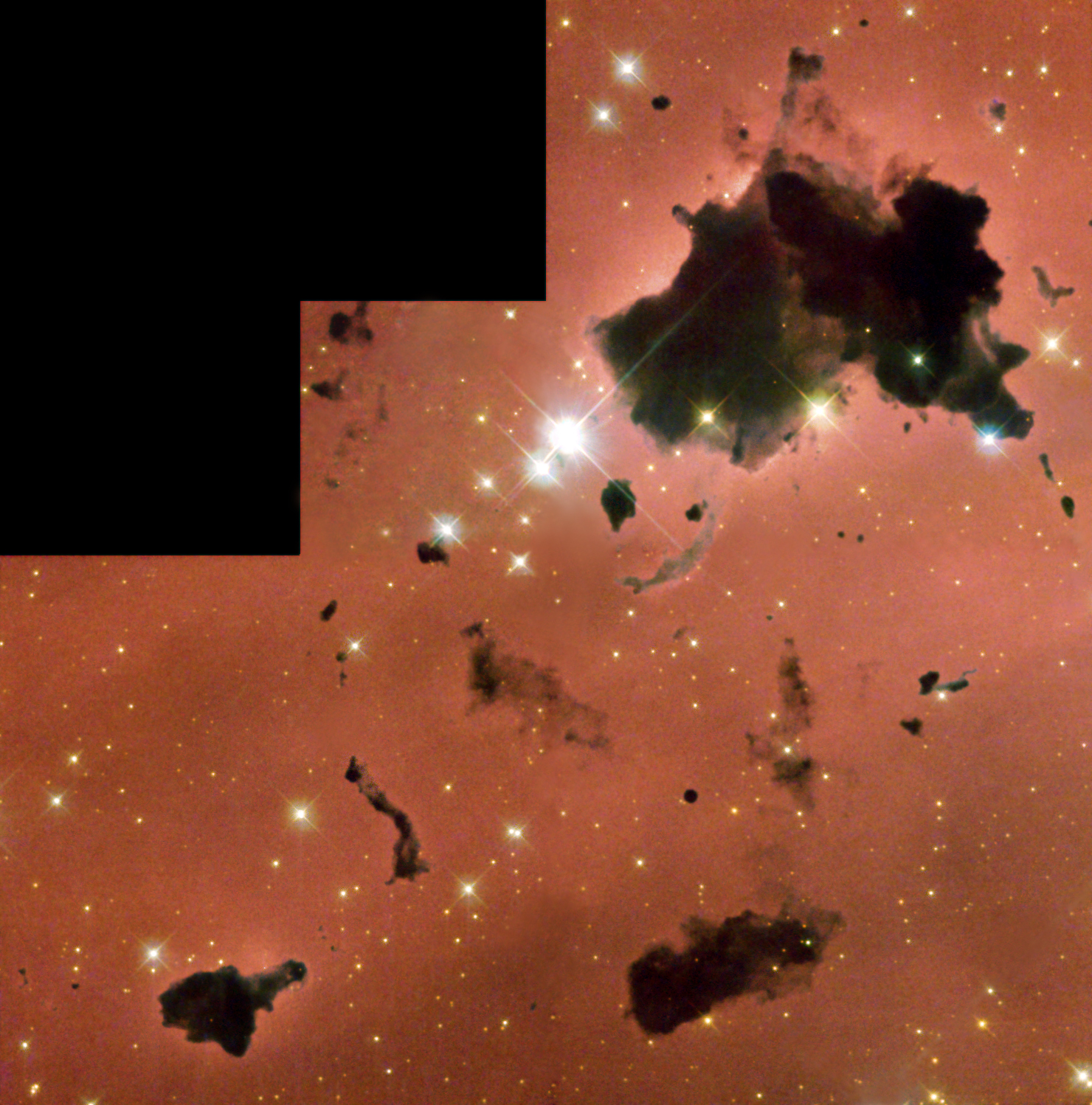 You can also find a document that regroups current research for Nebula Winters, corresponding to image 1. the geology evidence is the following:

Bodiselitsch et al. (2005) found iridium anomalies at the base of all cap carbonates both after the Marinoan and Sturtian glaciations; iridium and other platinum-group elements are typical proxies for extraterrestrial (including exosolar) materials and are much more abundant than in the Earth’s upper mantle and crust. These authors interpreted the anomalies to be the product of the rapid accumulation of extraterrestrial material once trapped in the surface ice and later transported to the ocean floor via the melting of the ice at the end of the glaciation. Nevertheless, the excursion of iridium may also reflect the enhanced flux of extraterrestrial material due to an encounter with a nebula. Moreover, 244Pu is expected to remain in the Fe/Mn crusts of interest. Fields et al. (2005) estimated the 244Pu production by a supernova explosion to approximately 0.9 ×10-7 solar masses. The expected flux of the 244Pu at the Earth is approximately 10-16 kg m-2 yr-1 . A significant amount (0.1 Bq m-2 ) of the accreted 244Pu remains in the sedimentary rocks, even considering the half-life of 244Pu (80 Myr). The existence of abundant 100-μm spherical iron balls in pelagic sediments is also possible direct evidence. For example, Miono et al. (1993) argued that the spherules accumulate in Paleozoic-Mesozoic bedded cherts. These spherules are generally believed to originate from 25 micro-meteorites. The nebula winter model can be tested by similar but further advanced investigations, including the analysis of the abundance of the isotopes and platinum family elements of the minerals separated from spherules in the pelagic sediments, detailing their exosolar nature. In addition, mineralogical investigations on the ages, the abundances of platinum family elements, and the isotope ratios of the minerals of the exosolar grains in the pelagic sediments at that time, will clarify the influence of the galactic environment on the natural history of the Earth.

The theory is supported by time correlation, which is fairly close to starburts, which occur every 100Ma.

Other reasons for the Cambrian explosion are the edvent of bilateral animals, 600Ma, the last snowball event from 630Ma, PH and oxygen instability in the ocean, algea blooms. I found this pic which gives an idea of the oxygen concentrations from the cambrian: 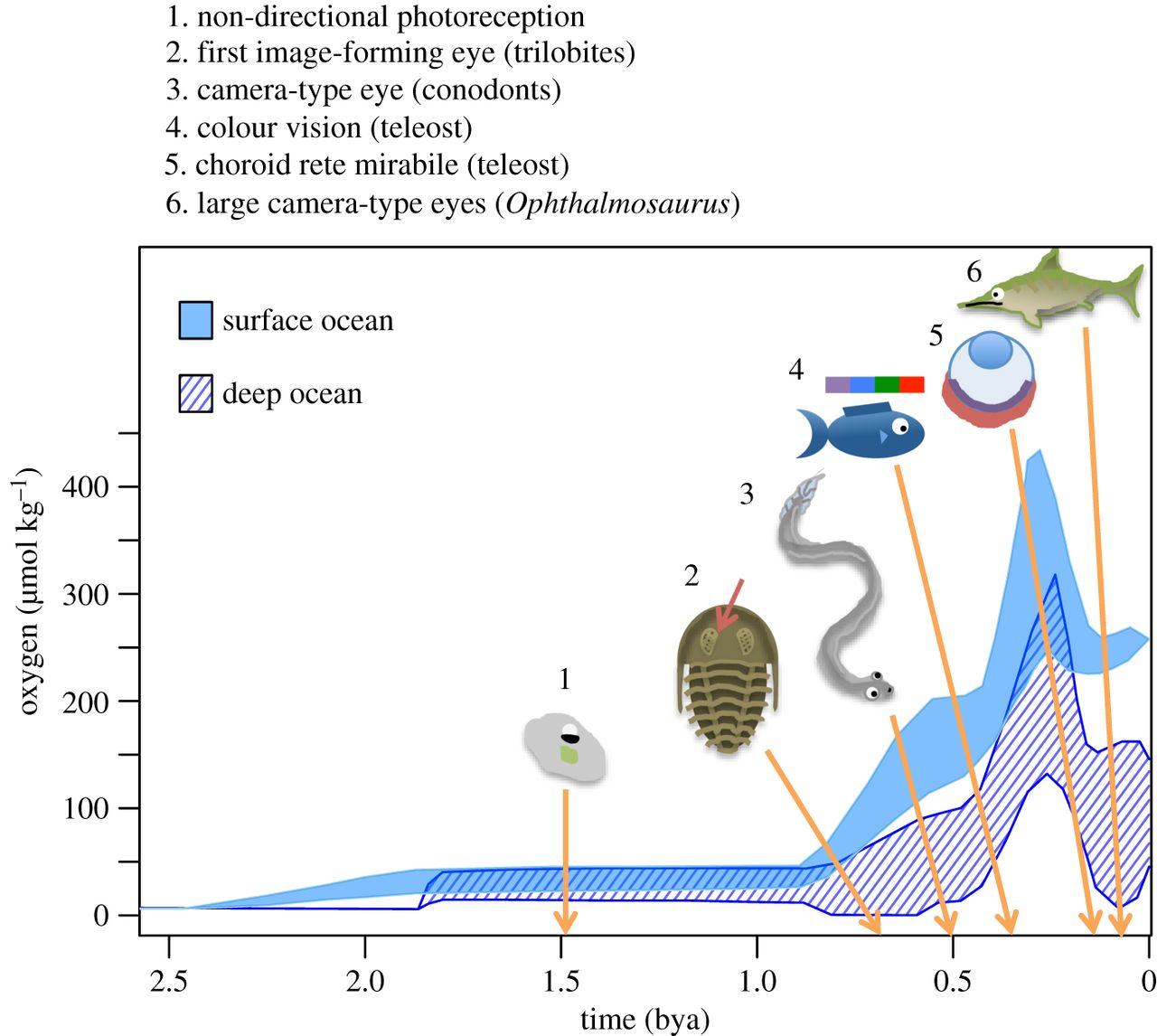 2
Determining distance from semi-major axis and eccentricity
2
Why are gravitational perturbations stronger at larger semi-major axes?
1
Is it possible that the Universe is expanding due to additional Big Bang events?
3
Plotting Astronomical Data Using Python
1
Simulation and its necessity in astronomical research