Can black holes be used as an energy source

I’ve heard that black hole will be rotating continuously which stores a huge amount of energy in its rotation. Will this energy be accessible, since the rotation is imposed on the space outside the hole.

What you are thinking of is called the Penrose process - a means of extracting rotational energy from a black hole.

The basic idea is that you allow a composite body to fall towards a rotating black hole. Once it reaches the ergosphere - that region, outside the event horizon, where the "frame dragging" due to the rotating spacetime is so severe that no body can remain stationary from the point of view of a distant observer - the body should split. One half falls into the black hole and the other orbits and flies out again. If things are arranged correctly then the returning part of the body can have a kinetic energy that exceeds the rest mass energy of the half that has fallen into the black hole. The energy comes at the expense of slowing the rotation of the black hole. 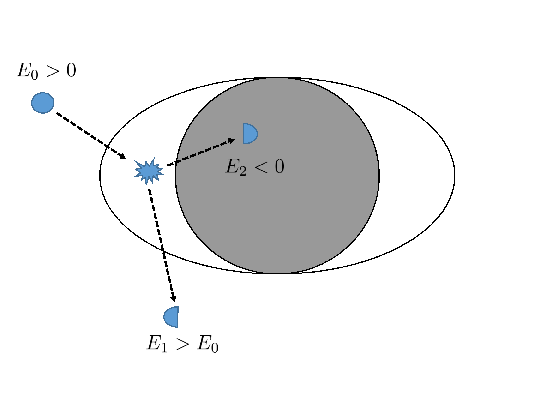 If the rotating black hole has an accretion disc (as many do if they are in binary systems - that's how they are identified) then another method is the Blandford-Znajek process. This may actually be the way that quasars and many of the energetic phenomena in gamma ray bursts and black hole binary systems are powered. In simple terms, a magnetic field that threads the accretion disc can be twisted up by the ergosphere. Material can then be propelled in jets along the rotation axis, but is given a spin by the field lines, which extracts angular momentum (and rotational energy) from the black hole. This energy can then be released when these jets run into other things.

While a rotating black hole will store a great deal of energy in its rotation, and there is even a way of converting that that energy into a form that can do useful work (the Penrose process), this is of no practical use in energy generation.

The nearest know black hole is more than 1000 light years away, and while there are probably quiet inactive black holes that are closer, they are still much too distant to be useful in energy generation.

If a stellar mass black hole approached the solar system close enough for it to be a potential source of energy, it's gravitational mass would start to disrupt the solar system (as it would have a mass greater than the sun, the planets would tend to move into orbits around the black hole, not the sun.)

So this is like suggesting that Earth's core could be a source of Iron. Its not practical as it is too far away and if it were closer it would be too dangerous.

Not the answer you're looking for? Browse other questions tagged black-hole cosmology general-relativity or ask your own question.

15
Statistically, what would the average distance of the closest black hole be?