Stellar core mass as a function of metallicity

Using Hurley's 2000 paper on Single Stellar Evolution, I have graphed the core mass of a star at three stages as a function of metallicity, Z, for a chosen ZAMS mass: at the beginning of the HG (MS), at the end of the Hertzprung-Gap (HG), and at the Base of the Asymptotic Giant Branch (BAGB).

All three functions have a cusp at Z = 0.0005 which I 1) do not understand physically and 2) wonder if it is incorrect? Is this expected? I would have expected that the core mass is monotonic in metallicity, Z. The cusp is present for any ZAMS mass chosen. 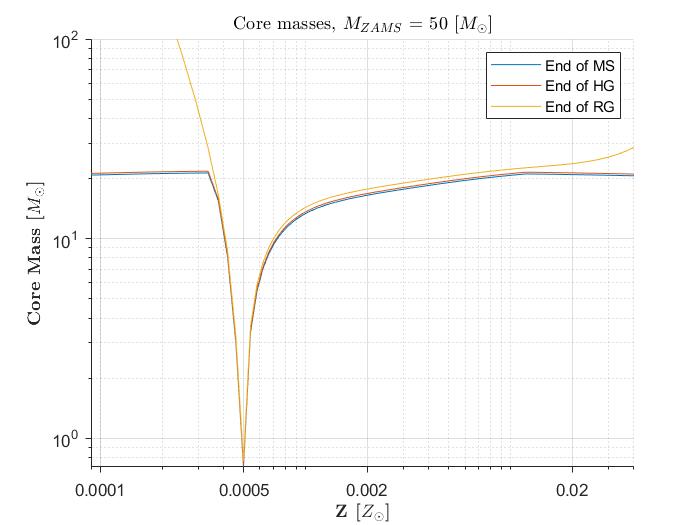 EDIT: The equations I use are...

Core mass at end of HG: $Mc_{HG}$ is, using equation 28 over the relevant mass range the HG ends at Helium Ignition, given by equation 44, where I solved for the time, $t$, in equation 35 and substituted that into equation 34 to find that $M_{c} = \Big(\frac{L}{D}\Big)^{1/5}$, and following the procedure given in the paragraph below equation 65 (where it references equation 44). I used equation 49b for the Luminosity here.

I'm only interested in stars above $10 \odot{M}$, so I do not consider the possibility of a Blue Loop phase for simplicity.

I feel silly, feel free to laugh at this, but I found my mistake. In the Hurley paper, he uses "log" for the logarithm of base 10. I had been using the natural logarithm. With the fix, the graph looks more realistic: 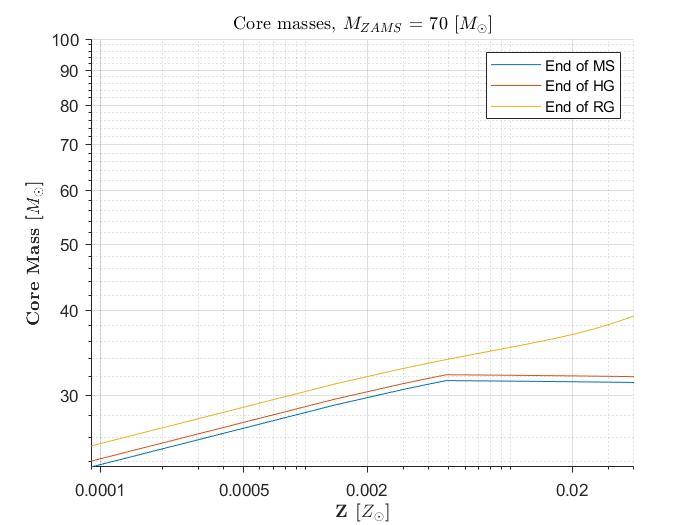 9
Is there a flaw with the newer purposes and correlations attributed to the HR diagram? (And would a third axis of mass correct the enclosed flaw?)
2
What is "Median Stellar Mass"?
3
Stellar mass database
2
stellar metallicity
3
Definition of stellar core?
8
Properties of low-mass stellar remnants vs the Earth
5
Stellar life cycle flow chart with mass conditions and time scales
2
How does the stellar evolution for low and intermediate mass stars differ?