I don't know much about astronomy, but my kids are asking for telescopes to view planets, stars etc. Could anyone tell me if this Eduscience telescope is any good? 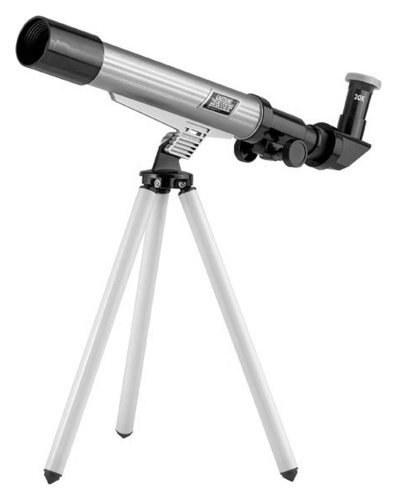 Someone else posted a question about this very scope not long ago. Simply put, no, it's little more than a cheap toy and a waste of money. The optical quality is going to be extremely poor. In my opinion, it is more likely to dis-interest someone in astronomy.

You didn't mention how old your kids are. Not knowing, it's hard to make a clear recommendation. Still, I wouldn't recommend this.

If your kids were interested in music and wanted to learn to play guitar, would you buy them the cheapest, lowest-quality instrument available, one that has poor sound, is difficult to tune and then doesn't stay in tune, and with such poor intonation that even when the strings are open-tuned, you can't produce proper chords? You wouldn't necessarily want to rush out and get them a professional-quality recording-ready instrument, but you wouldn't get them a toy either (at least, I hope not).

Of course, like playing a guitar, unless you know what to do with a telescope, it will be frustrating. Too many people buy telescopes with the belief they'll see things like they see in pictures on the internet, only to be badly disappointed. I've seen so many telescopes put up for sale on Craigslist and eBay or thrown in a closet or garage and ignored because the user had no idea what they were doing and were completely disappointed.

Depending on your kids age, my first recommendation would be to find and join a local astronomy club. The club I belong to, the Houston Astronomical Society, does regular star parties for schools and children. Many of our members join because of their kids - because they want to be able to teach their kids. We also have many adolescent and teen members who are active in our club. Membership is inexpensive (most clubs are $50 USD or less per year) and you can learn a lot.

As for a telescope itself, I would ignore ANY AND ALL telescopes under \$1,000 USD that are computerized, what we call GoTo technology. While some people might disagree, my experience, which is fairly extensive, with such telescopes is that they are poorly manufactured and prone to breaking down - at which point they usually are not usable in a "manual" mode. You also end up paying a lot for the electronics and mechanical parts, and getting less telescope. On top of that, the majority of those telescopes still require you know your way around the sky to be able to find key landmarks (usually a number of bright, named stars) to set up the telescope.

My general recommendation is an 8" Dobsonian telescope. A Dobsonian telescope is a Newtonian OTA (Optical Tube Assembly, the telescope-proper portion of the full instrument) with a simple altitude-azimuth rocker-box mount (meaning the motion is up/down and left/right, a natural motion for most people). Dobsonians or Dobs, offer the best ratio of price to aperture, and are very easy to use. However, an 8" Dob may be too much for smaller children, may be more than you're willing to spend, and may be larger than you're comfortable with. However, if you can, an 8" aperture is a very good starting place for an amateur telescope as it offers a good balance between cost, physical size, and optical capability. Most 8" Dobs weigh a total of about 50 lbs, evenly divided between the OTA and base, making the heaviest single piece around 25 lbs, with an overall total height/length of about 55 inches, give or take a couple. If you live in a light polluted area, they typically fit comfortably on the back seat of a midsize sedan or larger, and often will fit in a compact (though not something like a Smart car). Brand new, you can sometimes find them under \$400, but usually you can expect between \$400 and \$500 with a decent starting accessory package. I personally recommend the Apertura AD8, though the Orion 8" Skyline and XT8 are also decent models.

If price and/or Size is an issue, the next step down would be a 6" Dobsonian. The length/height is about the same, but they're somewhat thinner and a little lighter. The smaller aperture reduces light gathering ability, which reduces overall capability. Brand new, the price runs under \$300 for a decent instrument, but they can often be found used or refurbished for closer to \$200.

Smaller still, I'd consider the AWB OneSky 130 (known outside of the US as the SkyWatcher Heritage 130p). This is a 130 mm (5") Newtonian telescope on a simple alt-az mount (often referred to as a Dobsonian, but not a true Dob). The price is around \$200. Another option at the same size is the Meade LightBridge Mini 130, which is similar in size and capability. I've seen this closer to \$175 lately.

Stepping down further, there are a handful of 114 mm (4.5") scopes, including the Meade LightBridge 114 and the Orion StarBlast 4.5" Again, you are stepping downward in capability, but also price, and these smaller scopes are much lighter and easy to transport, though you Won't see as much with them.

I would not recommend ANY telescopes under this. There are many available, but most are of poor quality or design. Under \$150-ish, I'd recommend a decent pair of 7x50 or 10x70 binolculars.

Could anyone tell me if this telescope is any good

Telescopes of this kind (toy telescopes) have always been, in my experience, of quite poor quality. Maybe this one is great, but I don't see any information to suggest it would be. Again in my experience, a good telescope manufacturer will provide helpful information on the optics of the system (eyepiece design, f-number, highest useful magnification, types of object that can be profitably viewed); this company hasn't. It's just giving magnification numbers. My assumption is that the optics aren't manufactured to a high level of quality, and the eyepieces are of the kind typically provided with this kind of scope, which makes the whole experience even worse; not to mention the typically shaky mount these come with, and the extremely narrow field of view these often provide. I'd recommend checking out AWB's reflector or something like it, which is a great entry-level option:

This kind of telescope is relatively simple to use and can actually produce decent views of certain objects.

I'm not familiar with this telescope, but if you only want a telescope, and not a microscope as well, then for the same money you could probably get a better telescope. Just google "beginner telescope astronomy" or something similar.

You don't mention the age of your children, but young children seem to find looking through optical equipment quite difficult to do, especially using just one eye, so it would be worth discussing suitability with the retailer - assuming you choose a specialist company.

I bought a very similar one in a supermarket for 30 euros when I was an undergrad.
My experience goes along with what the other answers expect: It's a mostly useless toy.

You'd have a better experience with binoculars and a proper mount. The problem with my cheap scope was not that you wouldn't see anything (you could, Moon, Jupiter's moons, resolve binary stars like Albireo), but that it was extremely shaky.
If your cheap telescope doesn't have a mount that absorbs the force of your eye bumping into it, you're in for a hard time seeing anything, because that happens all the time.

After tweaking the mount a bit do-it-yourself style, it was good enough to impress some of my fellow students however. So my recommendation would be: As long as it's cheap and you don't mind possibly some handiwork, go for it.

The polite term we use for these department store fixtures is "Hobby killers". The detailed answers you have received are spot on. I would only temper them by saying it is not the absolute amount of cash you need to spend. One can come by even greater scopes for much less. And that if you are somewhere dark, even a six inch reflector could be a good first scope.

And then of course there is building your own...

A lot of the low-end refractors are limited by the cheap eyepieces. I have picked up some of these at garage sales and using high quality eyepieces found them acceptable for entry level use. Anything advertising 900x is showing a theoretical magnification. Atmospheric turbulence and optical quality means that they will be useless at those magnifications. A quality reflector will seldom do well above 40x the diameter in inches of the mirror. A FEW high quality refractors will go to 60x. See http://claytoncramer.com/Quality.htm

Not the answer you're looking for? Browse other questions tagged telescope amateur-observing or ask your own question.

3
Is the angular resolution of a telescope irrespective of used eye-piece?
3
Moving from computerised to normal amateur telescope?
3
Telescope choice
5
Question about Telescopes , observations and explanations of the observations
1
How can I find out the maximum magnification of my telescope?
0
76mm reflector vs 70mm refractor? Both are at sale at $200
4
Split telescope into two eyes