How does the Moon move in the "night" sky as seen from the poles?

A photo in the NYTimes article Ice Surveys and Neckties at Dinner: Here’s Life at an Arctic Outpost has got me thinking.

During the winter months at either the north or south pole, when it is constantly dark, how does the Moon behave?

Would a nearly-full moon sometimes circle for days without setting, or would it still rise and set, or would it be all together missing, or some combination of all of the above? 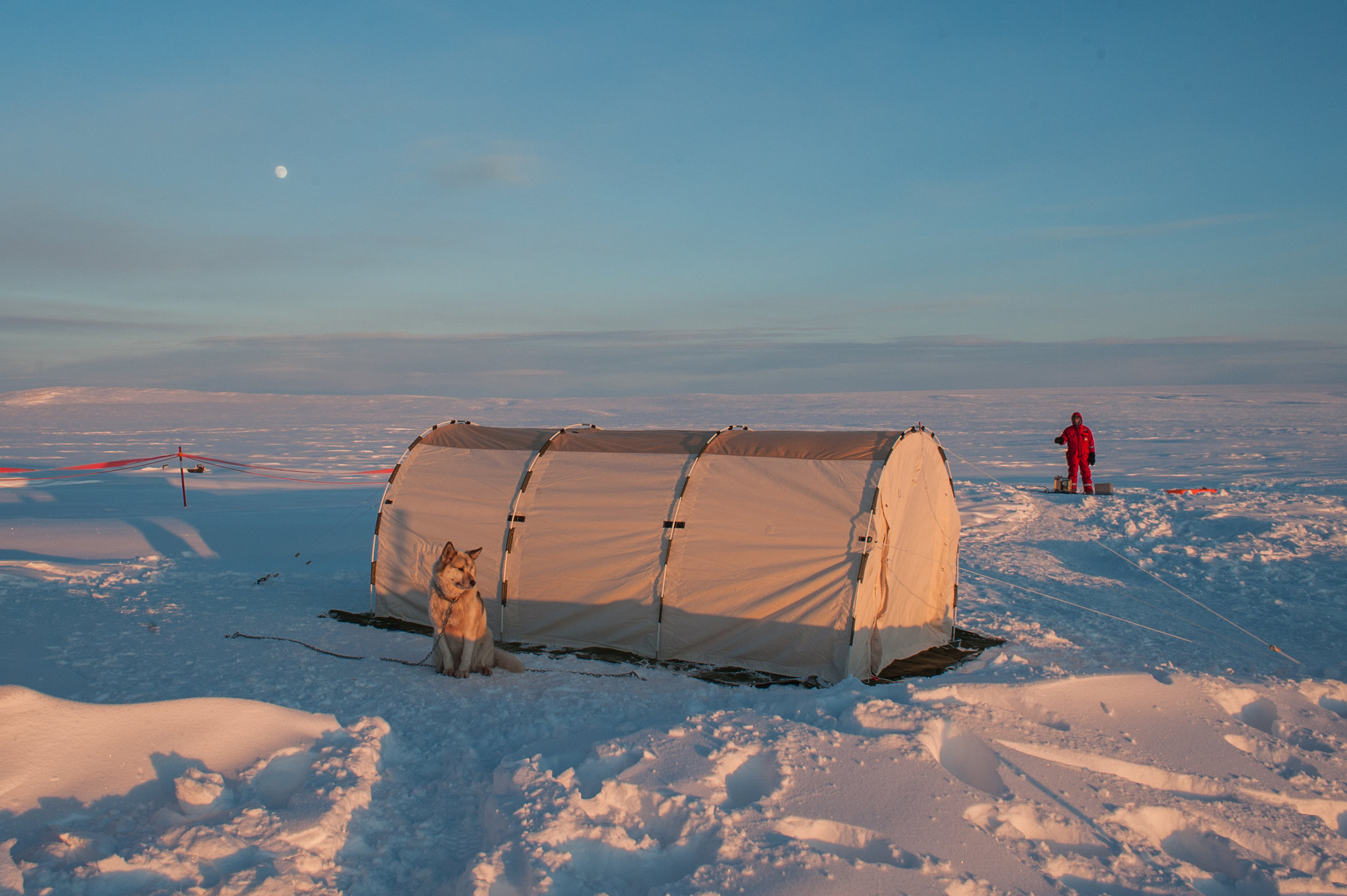 The moon is quite interesting as you get near the poles. It still moves round due to the Earth's rotation once a day, but it also orbits with a period of a month so what you get is two weeks of moon above the horizon followed by two weeks where you cannot see it.

This simulation using Stellarium shows the effect quite well.

From astro.cornell.edu - this wording may help:

The second movement caused by the Moon's orbit around the Earth is analogous to the movement of the Sun over the course of a year only it repeats over the course of a lunar month. Near the new Moon phase, the Moon is near the Sun and therefore never rises during the winter. As the Moon approaches full, it will start to pop up above the horizon. Eventually near the full Moon phase it will be high enough in the sky to stay up all day and circle like the Sun in the video above. The elevation of the circle will rise as the Moon becomes completely full and then start to decrease until it begins to dip below the horizon. Eventually the Moon will stop rising at all as it gets close enough to the new phase. The cycle then repeats.

And another useful reference at planetarium.madison.k12.wi.us:

The animated graphic above shows what we would see from the North Pole if we went out every day at noon, for 14 days in a row, from March 1st to March 14, 2006. We start with a thin crescent moon near the horizon, and end with a full moon near the horizon. Halfway through, the First Quarter moon would be when the moon is highest above the horizon.

Keep in mind, that if you were observing the moon constantly, throughout a 24 hour period, the moon would seem to move to the right in the sky along with the sun, stars, and planets due to the Earth's rotation. Nothing would seem to rise and set: they would just seem to circle around you.

It might be worth to add a minor point to @Rory Alsop answer which I would like to be a comment (in light of other comments there) - but little too long for that.

In the answer we read quote:

At the beginning of Winter, when it's nighttime all of the time, the moon would be in the sky for the 2 weeks closest to Full Moon, and then below the horizon for the next 2 weeks.

That is basically correct, yet if one seeks accuracy, the "beginning of the winter" (for the Moon) should not be taken as exactly 21 March for the South and 22 September for the North pole. Rather this date moves across cycle of 18 years due to the Nodal precession of the Moon and the tilt of 5 deg the Moon orb with respect to the ecliptic.

Let's consider the South-Pole. during the Summer when the RA of the Sun is between 180 (22 Sep) and 360 (21 Mar), we would naturally expect not to see a full-moon. This is the intuitive thought as the Moon should be 180 deg apart from the Sun (which during the Summer is always above the horizon), hence to be below the horizon.

But, due to the 5deg tilt of the Moon orbit with respect to the ecliptic, we can see the Full Moon and the Sun both above the horizon! in order for the Moon to be full it needs to be 180 ecliptic longitude away from the Sun, which I think should be also about 180 in RA (since the tilt is quite small of 5 deg.)

During in the 18 year cycle the Moon is expected to have the RA of its node move ~13 deg from each side of the [equatorial] node. If we translate this to the movement of the Sun it gives us ~13 days movement (to each direction) from the day we can see the Full Moon above the horizon - so in this sense the "beginning of Winter" can move few days (~13) back and forth across the circle of 18 years.

Let's see concert example. Just before the March equinox, say in RA 355, when the Sun about the set in the South-pole, but still above the horizon; and if we are lucky enough to have a Full Moon that date, it means the Moon will be at RA ~175. As we said earlier the Moon might have negative declination even from RA 167 (180-13). So at RA 175 the Moon might have negative declination and hence just little above the horizon in the South-Pole.

This will happen, for example, on 19 March 2030 at the South-pole. Both the Sun and the Full Moon are above the horizon. (though the Sun is quite close to the horizon, the Moon is quite far +4 deg of altitude (= (-4) in declination) - which demonstrates the point nicely).

Not the answer you're looking for? Browse other questions tagged the-moon night-sky .

15
How is this picture of the moon possible?
12
Why does the Moon never set in Svalbard, Norway?
9
The moon in the first phase visible in the sky is tilted
5
can moon rise before sun and set after it in the same day
8
When was it realised that most major moons orbit in the equatorial plane of their parent planets?
4
How to calculate the nodal precession range of the Moon with respect to the celestial equator?
2
The movement of the moon
2
How fast would an object at cruising altitude(around 10,600 m) need to travel to stay on the opposite side of the Earth to the Moon?
2
How dark/bright are polar nights?
1
Does the Honey moon have a precession problem?
See more linked questions

5
Why don't stars move in the night-sky as the moon does?
71
How does the Earth move in the sky as seen from the Moon?
2
Why does the moon appear on cloudy night sky?
3
From our world's perspective, does the full moon look larger in one city than it does in another?
9
How does the sun move over the year in the sky of the Moon?
4
What did the night sky look like 100,000 years ago?
8
How will planets behave in the night sky as seen by Mars colonists?
2
Does the Sun and Moon basically appear to "move on the sky" identically regardless of location and date?
11
Will Starlink deface the night sky?
3
Why does light pollution make the night sky completely black without stars?