Where exactly is the modification that first corrected the spherical aberration in Hubble's primary mirror?

The April 2015 CBS News article How NASA fixed Hubble's flawed vision - and reputation describes the modification taken to the Hubble Space Telescopes by the Space Shuttle that was used to correct for the strong spherical aberration of the primary mirror due a highly accurate but incorrect figure.

above: "Due to an oversight during fabrication, the concave shape of Hubble's primary mirror was too shallow toward its outer edges by 2 microns, a tiny fraction of the width of a human hair. As a result, starlight was not brought to a focus at the same point, resulting in blurry images. These three images show the same star as viewed from a ground-based telescope, left, and from Hubble's uncorrected mirror, center. The corrected image, after a space shuttle repair mission in 1993, is seen on the right" from here. credit: NASA

But the mirror's biggest impact was on the Wide Field Planetary Camera, the instrument expected to provide the dazzling visible and near-infrared images most easily understandable by the public and of tremendous value to astronomers.

"The real killer was Jim Westphal (the WFPC principal investigator at the Jet Propulsion Laboratory in Pasadena, California), who tended to be very negative," Weiler recalled. "Basically, he said he couldn't do anything. So that's what I was preparing to walk into the press conference with."

But as it turned out, Weiler had two aces up his sleeve. One he knew about, one he didn't.

The ace he knew about was drawn seven years earlier, when Weiler kicked off work to build a backup camera, the Wide Field Planetary Camera 2, a carbon copy of the original. John Trauger was the principal investigator, the man in charge of the instrument at JPL.

The ace Weiler didn't yet realize was built into the design of Trauger's camera.

Shortly after the first light image came down, "one of the grand old men of optics here at JPL, Aden Meinel, he and his wife Marjorie wanted to see what the image looked like," Trauger said in an interview. "We brought it up on the screen. ... And he looked at that for five minutes and he said 'that looks like spherical aberration.'

"That was the first time I heard spherical aberration," Trauger recalled. "The thing was, he also said 'well, if it is spherical aberration, you could fix it with Wide Field Planetary Camera 2.' He knew that we had these nickel-sized mirrors in our optical system, which received a sharp image of the primary mirror itself. ... The very last mirror before the image is created on our CCD was an opportunity to straighten the wavefront out. He recognized that, too."

By giving that mirror a prescription that exactly countered the spherical aberration in the primary mirror, the WFPC 2 would be able to achieve a perfect focus and do all of the science that was intended.

Question: Where exactly is the modification that first corrected the spherical aberration in Hubble's primary mirror? Can it be identified within the image below, or is it located elsewhere? Was the modification only a change in the figure of one of the small mirrors, or were other optical elements modified as well as part of the correction? 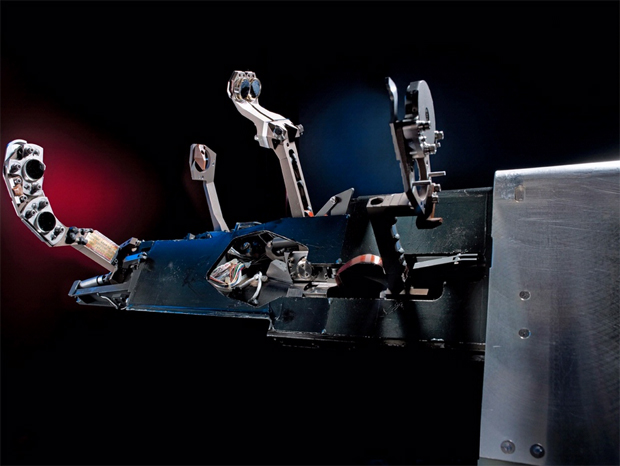 The image provided is of COSTAR which replaced the High Speed Photometer and fed corrected light to the Faint Object Camera (FOC), Faint Object Spectrograph (FOS) and the Goddard High Resolution Spectrograph (GHRS). Since the WFPC2 was already going to replace WFPC1, the correction for the primary mirror's spherical aberration could be designed in (as it has been for all subsequent instruments).

The overall layout of the HST optics (the Optical Tube Assembly (OTA)) and the WFPC camera optics is shown below in a figure taken from the Rodgers and Vaughan 1993 SPIE paper:

Light enters from the top left and is focused as normal by the HST primary and secondary mirrors and then part of the beam is picked-off into the WFPC2 camera. 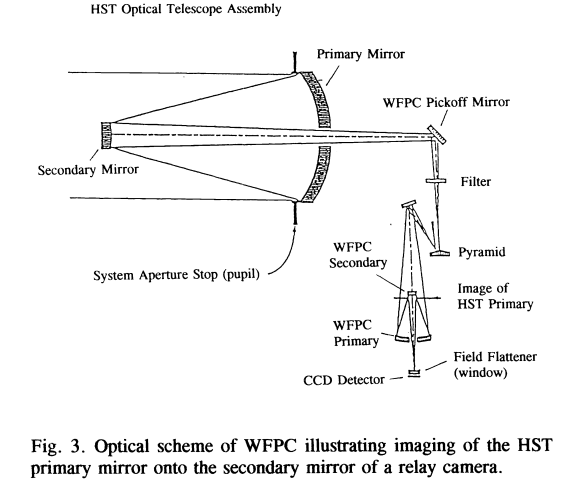 . The text just above that states:

The aberrated HST wavefront is corrected by introducing an equal but opposite error in each of the four Cassegrain relays. An image of the HST primary mirror is formed on the secondary mirrors in the Cassegrain relays. (The fold mirror in the PC channel has a small curvature to ensure this.) The spherical aberration from the telescope's primary mirror is corrected on these secondary mirrors, which are extremely aspheric.

indicating that the correction for HST's primary is done on the part labeled 'Secondary Mirror' in the diagram. Note that is the secondary mirror of the mini-Cassegrain telescope that is inside each of the 3 widefield and 1 planetary camera channels inside WFPC2 itself and not the main telescope secondary mirror which is off the diagram and part of the 'OTA' (Optical Telescope Assembly)

The small mirror inside WFPC2 which provided the correction for that instrument is not visible in that photograph, for the simple reason that the photograph shows COSTAR, a difference device.

For what it's worth, three of the four projecting arms in that picture carry the corrective mirrors that COSTAR used to fix the optical input to the Faint Object Camera, the Goddard High Resolution Spectrograph, and the Faint Object Spectrograph. You can see that the far-left and the second-from-right arms have two mirrors each (the small, dark, circular objects), which means they provide correction for the FOS and the FOC (I think the FOS corrector is the second-from-right arm); both of these instruments have two modes, requiring separate correction mirrors for each mode. One of the other arms has the correction mirror for GHRS. (I'll admit I don't know why there are four arms.)

Over time, new instruments were built and installed in Hubble. Those instruments (like WFPC2) were built to have the correction inside the instrument. When all of the original cameras were replaced, COSTAR was no longer needed and was also removed.

The HST has space for 4 main instruments. Each of them consists of a box with electronics, with a CCD or other detector on one end, in the focal plane of the telescope. The fifth instrument, WFPC is placed radially in front of the focal plane. 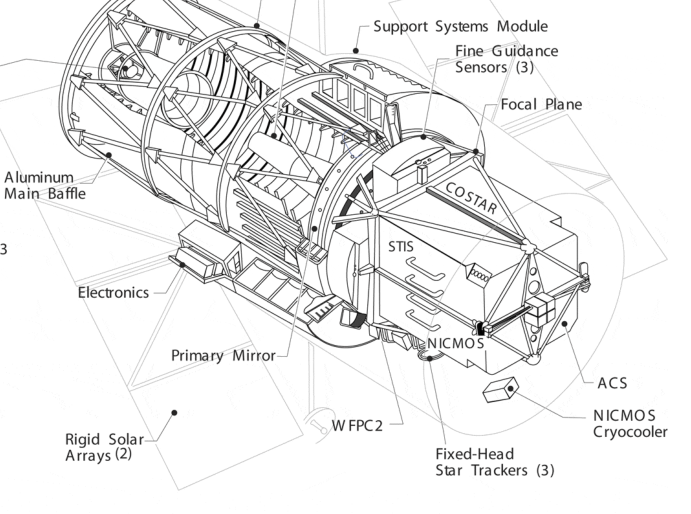 This image is from later in Hubble's career. FOS, FOC and GHRS (see below) have been replaced by STIS, NICMOS and ACS. The principle remains the same.

During Servicing Mission 1, 2 major changes were made: 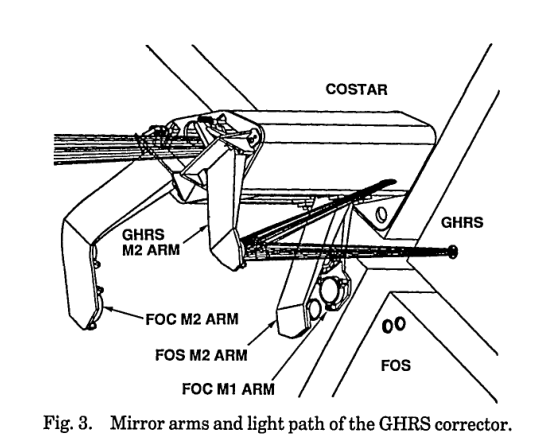 Here's the optical path for the FOC: 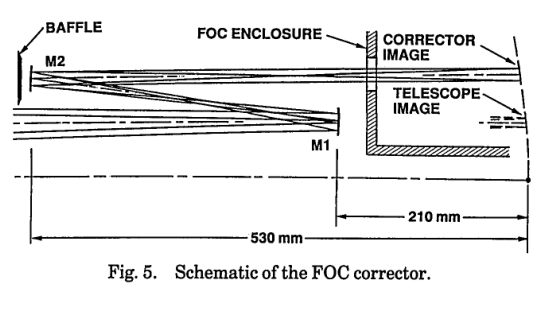 In COSTAR each corrector consists of a spherical field mirror Ml and an aspherical reimaging mirror M2 (Fig. 1). The function of Ml is to image the telescope primary mirror at M2. A spherical mirror suffices.

M2 is a fourth-order anamorphic asphere. The fourth-order term compensates for the spherical aberration and must be slightly anamorphic because the corrector mirrors do not form a centered system. Control of astigmatism requires M2 to be anamorphic of the second order also.

In later service missions, the main instruments were replaced with instruments that had corrective optics built in, the last instrument that needed COSTAR was removed during Servicing Mission 3B. So on the last servicing mission (4), COSTAR could be replaced with the Cosmic Origins Spectrograph (COS). COSTAR was taken back to Earth and can now be seen in the Smithsonian, which is where the photo in the question was taken.

9
Why aren't reflector telescopes built with an offset secondary mirror?
4
Why does Nancy Grace Roman = 100 × Hubble? Why is the new space telescopes wide field camera so much wider than the old one's?
1
How are "parallel fields" implemented on the Hubble Space Telescope?
2
Do triple or more times reflecting telescopes exist?

7
Why does e.g. Hubble's secondary mirror not block part of the picture?
2
Why is this HST WFPC2 image so much fuzzier than the WFC3 image of the same field?
6
How would a Fast Fourier Transform Telescope work without a mirror, dish or lenses?
7
Has Hubble photographed Venus in near IR? If so how does it compare to the new and exciting Parker Solar Probe image?
7
How are the occurrence and nature of micrometeoroid impacts on JWST optics identified?
4
How often and for what reasons does Hubble use two different instruments at the same time?