What are Kepler's laws (as he wrote them)?

There are of course many, many sources that quote Kepler's laws of planetary motion. This is preventing me from finding out what I really want to know: which is - what are Kepler's laws as he wrote them? As opposed to how they may have been later interpreted.

Very specifically I am interested in whether "Kepler's First Law", as proposed by Kepler, which is usually stated in the form that orbiting objects in the solar system execute elliptical orbits with the Sun at one focus, actually recognised, or had a caveat, that in a 2-body system it is the barycentre that is at the focus of an ellipse for both bodies, and that it is even more complex in the case of 3-bodies or more.

Short Answer: Kepler expressed his laws with the sun at a foci rather than a barycenter.

Long Answer: In Astronomia Nova (pub. 1609) Kepler presents the first version of something we can recognize as Kepler’s first law:

On page 285 of Astronomia Nova:

The translation by William H. Donahue New Astronomy is:

Chapter 59 Demonstration that when Mars reciprocates on the diameter of the epicycle, its orbit becomes a perfect ellipse; and that the area of the circle measures the sum of the distances of points on the circumference of the ellipse.

It isn’t immediately clear from Kepler’s own statement of his first law if the sun or the barycenter is the occupied focus. Indeed, I couldn’t even find a mention of a focus in Astronomia Nova. The closest I could find is when Kepler says, “a planet is moved less vigorously when it recedes from the point whence the eccentricity is computed.” Here, it appears that Kepler is referring to the fastest speed of a planet at Perihelion, and the slowest speed at Aphelion. The point from "whence the eccentricity is computed" is also clearly the focus of the ellipse. Here is one of Kepler's original woodcuts, and it can be seen that the sun is at the focus. Kepler used the metaphor of a row boat for the planet's motion, and his drawings of oars in the water complement this cutting. 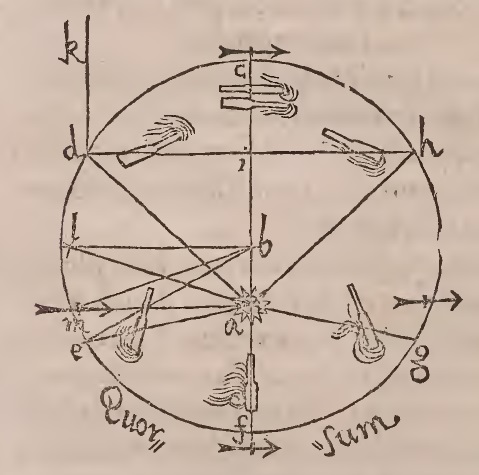 Kepler believes the sun is the center of this system from “Chapter 33 – The power that moves the planets resides in the body of the sun.” On page 280 of Donahue’s translation, Kepler says that:

Summary: Kepler believed the sun was the center of the solar system, and provided the motive power for the planets. He used the location of the sun to calculate the eccentricity of Mars's orbit and later extended his findings to the rest of the planets. While we can't rule out the possibility that Kepler speculated about a barycenter, he certainly didn't express any such speculations in his original formulations of his laws. 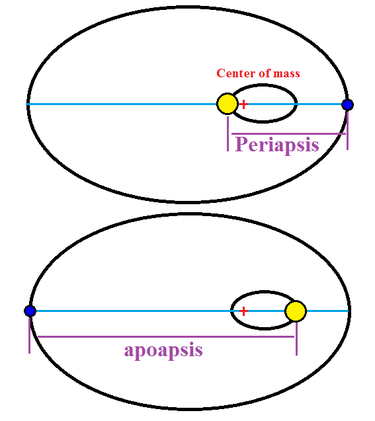 Not the answer you're looking for? Browse other questions tagged planet history orbital-mechanics johannes-kepler .

5
Was Newton the first to mention the orbital barycenter?

2
How well do planetary orbits fit with Johannes Kepler's in- & circumscribed Platonic solids?
0
Kepler's second law of motion
4
Orbits using Newtons laws
1
How to find the Orbital Period of two Binary Planets around a Single Star?
1
Can Kepler's 3rd Law be applied in higher dimensions to describe orbits (quadric surfaces)?
8
Explanation of an imaginary transformation occurring in the determination of trigonometric series for the elliptical equation of the center
5
How to derive Kepler's 1st Law?
5
Kepler's Law, focal points - Heliocentric or Barycentric?
5
Was Newton the first to mention the orbital barycenter?