From what distance would our sun have an angular diameter of 7 arc seconds?

If an observer travels away from our sun, at what distance would our sun occupy 7 arc seconds of space?

While this might seem to be strictly a math problem, it's really loaded with Astronomy, let's see what we can learn!

If you're far enough away that you can see essentially a full hemisphere (which you can't if you're close), the apparent angular width is twice the half-width, and that's given by

for small angles, where $r$ is the physical radius of the object and $R$ is the distance from the viewer to its center. This is also similar to or the same as @peterh's method.

There's (at least) two problems with trying to talk about the radius of the Sun;

Let's do #2 first. There is a formal working definition for the optical edge of the Sun, and this excellent answer to the question How do you define the diameter of the Sun states:

Most literature will define the diameter of the Sun up to the photosphere, the layer of the solar atmosphere you would see if you were to observe the Sun in white light.

Of course the true edge of the solar atmosphere could be considered as the heliopause, where the direct influence of the Sun's magnetic field and solar wind end and interstellar space begins.

With that definition of the edge, let's look at the shape of the Sun. Wikipedia gives both 695,700 and 696,392 km for the equatorial radius of the Sun, sourcing from IAU 2015 Resolution B3... and Measuring the Solar Radius from Space during the 2003 and 2006 Mercury Transits respectively.

The Wikipedia article gives a flattening of 9E-06, which makes the polar radius only about 10 parts per million smaller, which is a much smaller equator-to-pole difference than I remembered it to be. I guess we can ignore it after all!

Your orbital period around the Sun would be over 4,500 years, and you'd be moving at 1.8 km/sec in that orbit, as opposed to 30 km/sec for the Earth.

You'd be well past the Kuiper belt but nowhere near the Oort cloud (this is a simplification, but it will do for now), and you'd be way past the farthest known solar system body in 2018! V774104.

I don't know the name of the place you'd be, it looks pretty lonely though! 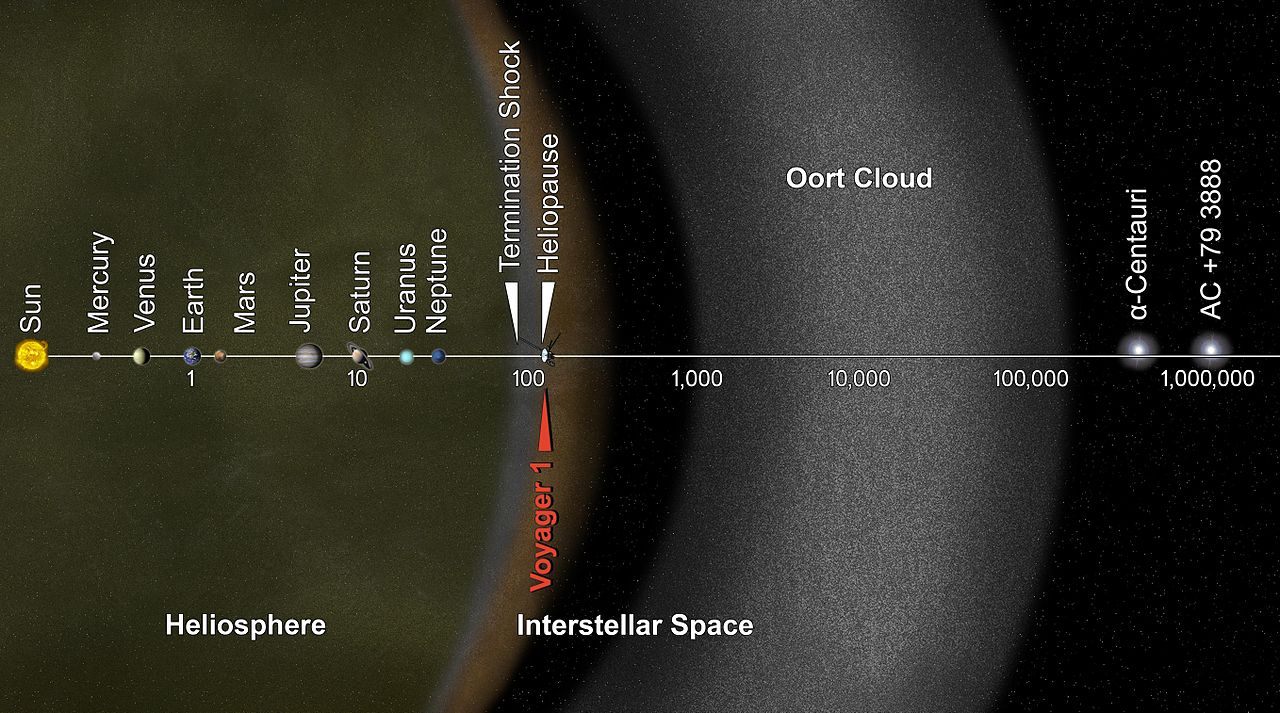 Not the answer you're looking for? Browse other questions tagged the-sun angular-diameter or ask your own question.

11
How do you define the diameter of the Sun

21
At what distance from Earth would our Sun be the same apparent magnitude as the next brightest star in the sky?
2
How do you find the altitude of the Sun if you are on the Moon?
2
What constellation does sun occupy by location and date?
0
Solar Elevation Angles — Anomaly?
3
Understanding The Turnover Point of Angular Diameter Distance
4
Angular Diameter Distance
9
What would the sun look like from aphelion of The Goblin's orbit?
2
What does the Sun look like from the heliopause?
5
Sun, Moon: Relative Distance from Crescent?