In the closest stars, can you see the stellar corona?

Stars appear larger than they are, could that be the stellar corona here around Sirius, making it appear n-times larger than the stellar body? NASA recently mapped the solar corona to extending 12 solar radii above the surface 1, the corona as a whole occupying 13x the suns diameter if viewed from a distance. 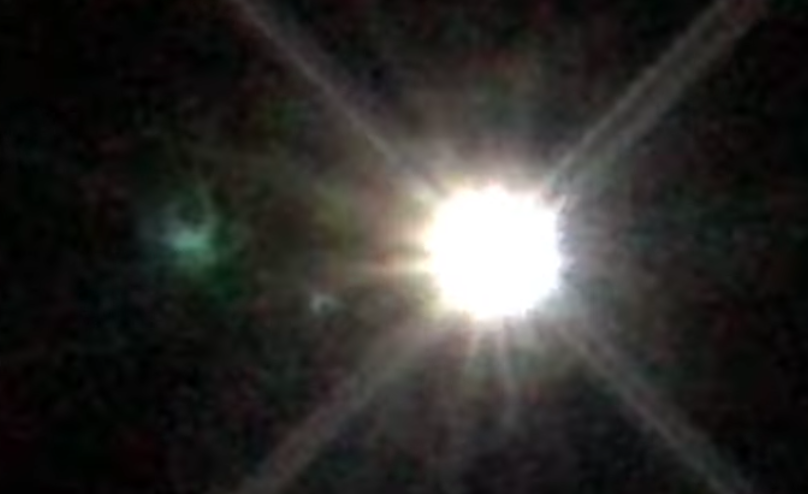 Stars other than the Sun do not have photospheres or coronae that can be directly imaged (the exception would be the red giant Betelgeuse that can just be resolved from the HST). They "appear larger than they are" as you put it because of the limitations of physical optics or turbulence in the atmosphere. There is a minimum-sized "point spread function" image that will be convolved with the intrinsic image of a star, whatever its size. Thus even a point-like source will appear to have a finite size when viewed with a telescope with a finite aperture. Images of very bright objects may also be affected by "saturation" of the detector - the counts in saturated pixels can "bleed" into surrounding pixels. All stars (bar Betelgeuse) are too small and far away to be anything but intrinsically "point-like", even when observed with space telescopes.

The image of Sirius in your question is the saturated image of a very bright, point-like object blurred by the imperfect optics (and perhaps a turbulent atmosphere) on a telescope of finite aperture. Any "corona" you see on this picture is the extended wings of the telescope point spread function. The size of Sirius cannot be directly inferred from this picture. (It is also the case that Sirius, an A-type star, does not have a corona like the Sun's, because it lacks the magnetic dynamo and strong magnetic fields that are responsible for heating the solar corona, and it lacks the very strong winds that shock heat coronae in much hotter stars).

That said, there are clever, interferometric techniques to synthesise a large telescope using extended baselines between multiple telescopes. These are capable of directly measuring the angular diameters of stars. The assumption is that what is being measured is the angular diameter of the photosphere, since this is what dominates the light at optical and near-infrared wavelengths from most stars. In particular, the corona - a regions of tenuous, optically thin, ionised gas - emits hardly any visible/infrared light (it is of order a billion times less bright than the solar disk and due mainly to Thomson scattering of photospheric light from free electrons and dust scattering) and can safely be neglected. That is why the optical/infrared corona of the Sun can only be seen during total solar eclipses on Earth or from spacecraft with occulting disks that can totally block out the dominant light from the photosphere.

Distant stars are too far away for this occultation technique to work. The presence of any coronae around them can only be inferred from the X-ray emission due to the hot coronal gas. In some cases it has been indirectly argued that the coronal gas can extend several radii or more above the stellar surfaces (e.g. by analysing the fall and rise times of stellar X-ray flares or from the lack of X-ray eclipses in some eclipsing binary systems).

2
Would the solar corona be visible from the distance of the outer planets?
2
Physical properties of the stellar corona?

12
How do you figure out the magnitude of stars?
6
Can we see individual stars in other galaxies?
6
Why can we see stars but not astronaut on the moon
9
What is the scale of things you can see with gravitational lensing?
1
When stars explode why can we still see them?
1
Can you see the stars when it is trickling?
6
Can we see the stars at the edge of the Milkyway?
-2
What is the closest stellar neighbour to Sirius?