What is it exactly about these flares of infrared light from Sgr A* that "confirms" it is a supermassive black hole?

CNET.com's SCI-TECH Scientists confirm a 'supermassive black hole' at the heart of our galaxy It's "mind-boggling", they say.

What is it exactly about these flares of infrared light from Sgr A* that confirms it is a supermassive black hole?

Certainly there is plenty of evidence, the orbits of stars nearby for one. But this use of the word confirm seems strong and frequent enough to suggest the deal has been done, the ink is dry, and it's a black hole without question and that until now that wasn't so.

I've shamelessly absconded the following images from this answer to the question What is the evidence for a supermassive black hole at the center of Milky Way?, which may need a new answer!

Note, the size of these stellar orbits are compared to those of Sedna, Eris, Pluto and Neptune in the bottom right corner (same scale)! 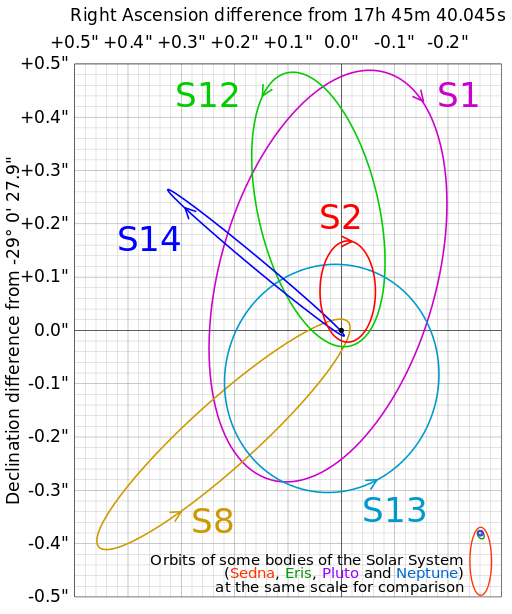 We have reasonably good measurements of the mass of Sagittarius A*, thanks to measurements of the movements of stars like S0-2 over several decades. It's been well-established that the mass of the central object is $M\approx4\times10^6M_{\odot}$; this alone is fairly good evidence for a supermassive black hole, and we can constrain the size of the object with the measurements (Ghez et al. 2008). Models of the orbits of other stars have further improved these results.

The recently-published paper (Abuter et al. 2018) uses a similar technique. The motion of the flares is well-described by the rotation of a "hot spot" of gas in the inner reaches of the accretion disk, with the flares arising from magnetic recombination or some similar event. In particular, it lies near the innermost stable prograde circular orbit (ISCO) - just outside it, actually (the orbital radius can be found because we know the mass of the object and the period of the orbit, with the best-fit model of the latter being $40\pm 8$ minutes). This both constrains the object's size and even qualitatively provides support for the black hole model, as we might expect to see such events around a supermassive black hole.

Looking at those articles, I think the use of the word "confirm" is inaccurate. As far as I can tell, the term is only used by the project leader, Reinhard Genzel, in that ESO statement - and it's not a claim repeated in the paper. The team describes their results as "strong support" for the supermassive black hole model, and say that their findings are "consistent with" that theory. As scientists should be, they're cautious. The results don't definitely confirm that Sagittarius A* corresponds to a supermassive black hole; they're simply additional (excellent) evidence for it.

13
Is it true that we see the center of the milky-way for only half of the year?
12
How did they make a video of the center of the galaxy, and what is it exactly that's flashing there?
8
Why does the author believe that the central mass that gas cloud HCN-0.009-0.044 orbits is smaller than our solar system?
5
What is the orbital period of our sun around its barycenter?
4
How did they measure the distance to the center of our galaxy to 0.3% accuracy?
3
How will they know when to start taking the picture of the black hole at the center of the Milky Way?

7
Orbiting supermassive black hole or galactic center of mass?
14
What will happen to the shape of a galaxy when a super massive black hole lying in its center dies(evaporates out)?
4
How feasible is it that we could see the Central Black Hole Sgr A* occlude one of it's closely orbiting stars?
14
Why does the closest approach of star S2 to Sgr A* not appear to be near the focus of its elliptical orbit?
0
Can the interferometer called "Gravity" measure "a few centimeters on the Moon"?
0
How do they know the newly-spotted gas near the center of our galaxy is molecular without knowing what gas it is?
3
How will they know when to start taking the picture of the black hole at the center of the Milky Way?
11
Was GRAVITY built to look at one star?
3
Could Sgr A* be a core of dark matter instead of a supermassive black hole?
8
Is the appearance of accretion disks of M87 and Sgr A* in EHT image, related to the nucleus being active or non-active?