I am asking myself this question: if a giant celestial object would approach the Earth, would Earth start to turn faster (then day duration would be diminished) or slower (day duration increased) while the object starts to become nearer and nearer? Thank you!

Could be, you'd be better to ask this on the Physics site, by the way.

No, the spinning of a perfectly round object is not affected at all, it just keeps spinning identically. 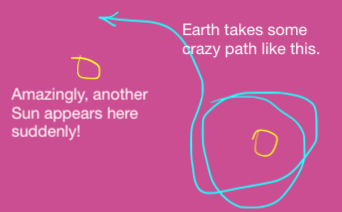 Yes, the path that Earth is taking would go crazy. We might fly off, head towards this new Sun, starting making a figure of 8, or some crazy path!

But the spinning as such of the Earth would be totally unchanged.

The "way we point" ("North up" so to speak) would be completely unchanged, and the speed we turn at (ie, 24 hours a turn) would be unchanged.

This might seem surprising but, well, you can learn all about it in Newtonian physics!

Once again, no change to the spin as such of the Earth. the "direction we point" (ie the axis we spin around) and the time taken is totally unchanged if (for some bizarre reason!) we are "moved around in the heavens".

Note that there would be some absolutely tiny effects due to things like relativity (have a read!), the water on our planet sloshing around, and after all our Moon could be moved, bashed, etc. These effects on the speed we are spinning would be extremely small over the short period of time you're considering, in the "sci fi" scenario you outline, as seen in the diagram.

tl;dr: Probably will slow it down a small amount, but may induce a wobble that make a simple answer impossible without further details.

The problem is complicated. I'll leave a short answer.

The question is carefully written in (at least two) ways. It is agnostic to the size of the effect, instead asking only about its sign. So arguments that the effects are too tiny to matter are moot. It also does not specify the nature, distance, or duration of the approach. That makes the question quite difficult to answer definitively.

The most straight-forward effect we know about is slowing due to tidal forces. The Theory subsection of Wikipedia's article Tidal acceleration outlines this nicely.

Because the Earth is slightly stretchy, the Moon's or another close body's gravity induces a tidal bulge. Wikipedia's Earth tide gives several components of a thorough decomposition, but the top two are about 38 cm due to the Moon and 17 cm due to the Sun. These exist on both the near and far side of each body.

Because the Earth responds slowly, these have a "lag". The lumps exist offset from the line between the Earth and the other body, and this allows for a torque. In the case of the Earth-Moon system that torque then tends to slow the Earth's rotation.

If the body is double in mass, the induced bulge's mass will be roughly linearly proportional and since the torque proportional to both it will be quadruple, proportional to $m^2$. As shown in that subsection it is also proportional to $r^{-6}. So just for example, a planet about the size of the Earth (~80 Moons) and half the distance of the moon would have a torque 80 x 80 x 64 times larger.

However, it's hard to imagine a scenario where that could last for a thousand years to have a huge effect on Earth's rotation speed. This would be small, but definitely negative.

The body could pass perpendicular to the Earth's equator as well, and produce a really huge torque on Earth's equatorial bulge (expressed often as the $J_2$ term). That bulge is more like 30 kilometers, compared to the 30 centimeters of the induced tidal bulge by the Moon.

A perpendicular pass like that would induce a substantial wobble in the Earth's rotation during the time of passage, but I don't think it is easy to say with certainty the sign of the effect on the rotation rate with such complex motion and no further details.

2
Scholarly work on the gravitational disruption of a rocky planet by a close pass with another planet?

3
How does this strategy for chasing the sunset work?
1
Would dark energy save the earth for a while as the sun heats up?
5
How long until the Earth and Moon become a binary planet?
1
Would the (orbitting) speed of the Earth change if suddenly the sun disappear and the Earth is thrown into space?
1
Day/Night Cycles and Seasons if the Earth's Rotational Axis and Orbit Changed
0
Why would there be no day/night cycle even though the firmament would still be rotating, according to Copernicus
4
Why is right ascension measured on a 24 hour scale rather than a 23 hours and 56 minutes scale?
2
Is it correct to assume that the relationship between an objects mass and size, is what decides if it’s a black hole or not?
2
As the Moon and the Earth are predicted to get into tidal lock, how slow would the Earth rotate?