Why has the orbit of Venus such a low eccentricity?

It has a low eccentricity, but there may not be a particular reason. 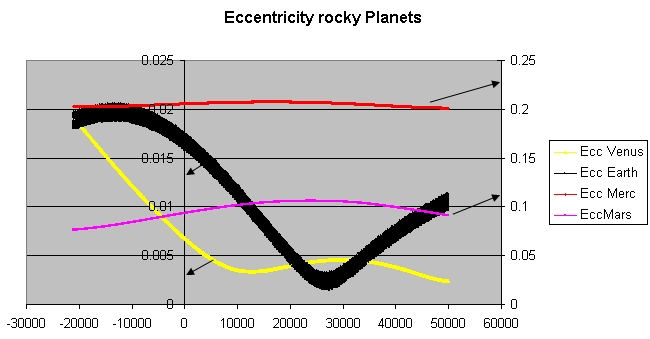 In a simulation of the solar system, both Earth and Venus had orbital eccentricities that were much below those of Mars and Mercury (note the two axes. Mars and Mercury are on a scale that is 10 times bigger). But in 25000 years, Earth will actually have a smaller eccentricity, and 20000 years ago Venus's eccentricity was much larger.

So there may not need to be a special explanation for this. Planetary eccentricities do change over 1000s of years due mostly to perturbation of other planets.

Not the answer you're looking for? Browse other questions tagged venus eccentricity .

32
What is the current accepted theory as to why Venus has a slow retrograde rotation?
9
Has the conjunction between Venus, Jupiter, and Regulus only occurred twice in 2,000 years?
3
What is the color of Venus if it has no atmosphere?
3
Does the relative motion between planets other than Venus and Earth form shapes such as the Flower of Venus?
1
Calculation of Eccentricity of orbit from velocity and radius
4
What could possibly save an atmosphere other than a magnetic field? Why can't a magnetic field save the atmosphere in certain cases?
3
What kind of effects can maintain Uranus' rings' eccentricities?
3
Why can't ptolemaic Venus be fully lit?
3
Best way to procedurally generate an orbit given mass and eccentricity