A new analysis of gravitational wave (and other data) from GW170817 on 2017-Aug-17 has been published, strongly suggesting that the merger of two neutron stars resulted in a large, rapidly rotating neutron star, rather than a black hole. From the abstract of the recent open access Letter in MNRAS Observational evidence for extended emission to GW170817:

[...]Here, we report on a possible detection of extended emission (EE) in gravitational radiation during GRB170817A: a descending chirp with characteristic time-scale τs = 3.01 ± 0.2 s in a (H1,L1)-spectrogram up to 700 Hz with Gaussian equivalent level of confidence greater than 3.3σ based on causality alone following edge detection applied to (H1,L1)-spectrograms merged by frequency coincidences. Additional confidence derives from the strength of this EE. The observed frequencies below 1 kHz indicate a hypermassive magnetar rather than a black hole, spinning down by magnetic winds and interactions with dynamical mass ejecta.

Discussion in paper points to supplementary data and in the introduction to that document, it says:

I am having trouble understanding what GPU-accelerated butterfly filtering of H1, L1 and V1 by matched filtering over a dense bank of time-symmetric chirp-like templates means. van Putten et al. 2014 in the supplementary data document refers to both BROADBAND TURBULENT SPECTRA IN GAMMA-RAY BURST LIGHT CURVES and to as well. These appear to be thorough explanations, but pretty in-depth.

Question: Is it possible to explain the basics of what "GPU-accelerated butterfly filtering of H1, L1 and V1 by matched filtering over a dense bank of time-symmetric chirp-like templates" means? A dense bank of chirp-like templates sounds like it could be analogous to a wavelet-type analysis, but with basis waveforms tailored to this specific problem.

First image is a cropped and annotated version of the second which ia from here. 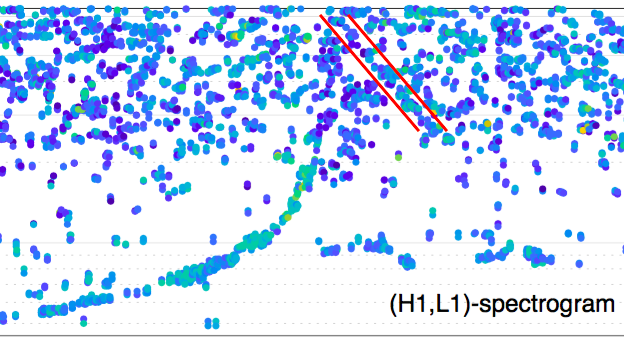 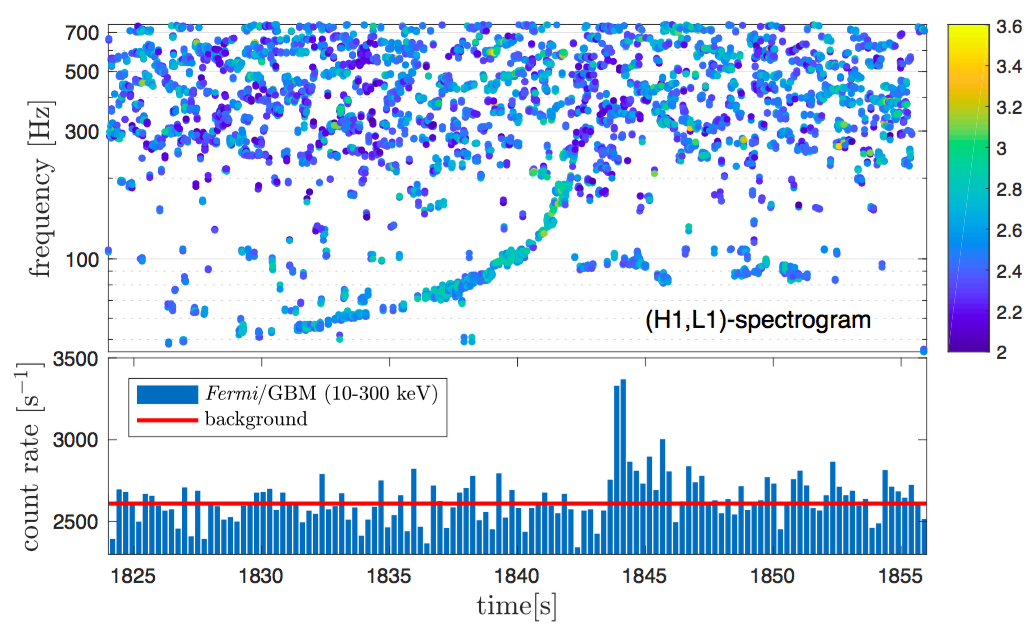 Browse other questions tagged gravitational-waves neutron-star or ask your own question.

4
Why isn't IMBH candidate GW190521 very “chirpy”? Which types of events will produce the most chirp-like behavior?
3
Observation of Gravitional waves by LIGO from binary black hole merger
4
Gravitational waves: how can scientists derrive the sizes and spin and distance of two merging black holes?
2
How did Fermi manage to see neutron star merger?
0
Fraction of initial mass lost (radiated) by neutron star mergers compared to black hole mergers?

0
What would harnessing of gravitational waves look like?
4
When black holes such as those detected by LIGO merge, in what ways does the Schwarzschild Radius warp?
6
What happens over time as a neutron star cools?
1
What is the average time between a nebula formation and a neutron star?
11
What would it feel like to be orbiting near a merging black hole?
6
What do the acronyms in “AT 2017 gfo” mean?
2
What does the word “compact” mean in astronomy/astrophysics?
2
What does gravity-wave noise resemble locally?
5
Does a gravitational wave loses energy over distance?
0
Fraction of initial mass lost (radiated) by neutron star mergers compared to black hole mergers?