Are they really sure this isn't an Airy disk? How was that ruled out?

How do they know that this is a spherical shell of gas, and not just something like an Airy pattern-like artifact produced by the VLT's large interferometric aperture? 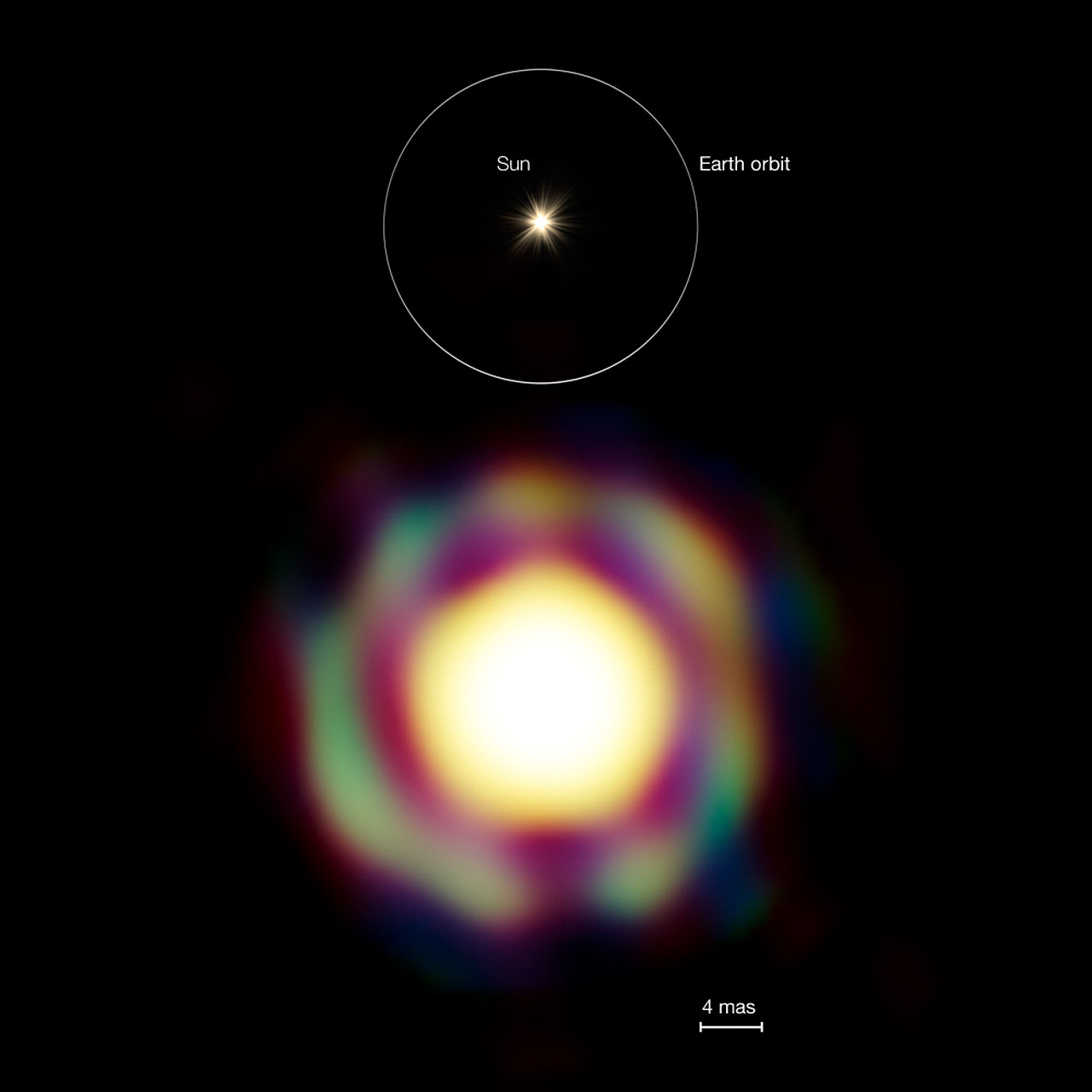 Are they really sure this is a real shell, and not an Airy disk? How was that proven?

“We were able to construct an amazing image, and reveal the onion-like structure of the atmosphere of a giant star at a late stage of its life for the first time,” says Antoine Mérand, member of the team. “Numerical models and indirect data have allowed us to imagine the appearance of the star before, but it is quite astounding that we can now see it, and in colour.”

Although it is only 15 by 15 pixel across, the reconstructed image shows an extreme close-up of a star 100 times larger than the Sun, a diameter corresponding roughly to the distance between the Earth and the Sun. This star is, in turn, surrounded by a sphere of molecular gas, which is about three times as large again.

T Leporis, in the constellation of Lepus (the Hare), is located 500 light-years away. It belongs to the family of Mira stars, well known to amateur astronomers. These are giant variable stars that have almost extinguished their nuclear fuel and are losing mass. They are nearing the end of their lives as stars, and will soon die, becoming white dwarfs. The Sun will become a Mira star in a few billion years, engulfing the Earth in the dust and gas expelled in its final throes.

Mira stars are among the biggest factories of molecules and dust in the Universe, and T Leporis is no exception. It pulsates with a period of 380 days and loses the equivalent of the Earth’s mass every year. Since the molecules and dust are formed in the layers of atmosphere surrounding the central star, astronomers would like to be able to see these layers. But this is no easy task, given that the stars themselves are so far away — despite their huge intrinsic size, their apparent radius on the sky can be just half a millionth that of the Sun.

“T Leporis looks so small from the Earth that only an interferometric facility, such as the VLTI at Paranal, can take an image of it. VLTI can resolve stars 15 times smaller than those resolved by the Hubble Space Telescope,” says Le Bouquin.

To create this image with the VLTI astronomers had to observe the star for several consecutive nights, using all the four movable 1.8-metre VLT Auxiliary Telescopes (ATs). The ATs were combined in different groups of three, and were also moved to different positions, creating more new interferometric configurations, so that astronomers could emulate a virtual telescope approximately 100 metres across and build up an image.

“Obtaining images like these was one of the main motivations for building the Very Large Telescope Interferometer. We have now truly entered the era of stellar imaging,” says Mérand.

A perfect illustration of this is another VLTI image showing the double star system Theta1 Orionis C in the Orion Nebula Trapezium. This image, which was the first ever constructed from VLTI data, separates clearly the two young, massive stars from this system. The observations themselves have a spatial resolution of about 2 milli-arcseconds. From these, and several other observations, the team of astronomers, led by Stefan Kraus and Gerd Weigelt from the Max-Planck Institute in Bonn, could derive the properties of the orbit of this binary system, including the total mass of the two stars (47 solar masses) and their distance from us (1350 light-years).

Browse other questions tagged optics angular-resolution interferometry or ask your own question.

7
What makes small interferometers useful? Like NIRISS on JWST
3
How does this telescope work, and what is it for?
2
What does a narrow-band "point spread function" look like for long exposures from the VLT's large interferometric aperture?

2
Can angular information be known more precisely than the diffraction limit?
7
How could a 20 inch space telescope "be able to make out Earth-size planets" orbiting Alpha Centauri?
2
Why is this HST WFPC2 image so much fuzzier than the WFC3 image of the same field?
3
What is the cause of all of these sharp, concentric rings around bright stars in this HST image?
2
Will the Magdalena Ridge Optical Interferometer be able to image extended objects like the surface of the Moon?
2
How do they know the non-uniformities seen on the disk of π¹ Gru are real and not artifacts?
0
Does this CHEOPS first light image imply bad astronomy?