What frequency distribution law applies to a random point in deep space that is assumed to be far away from any particular source of radiation.

Can it be expressed by some form of Plancks/Bose-Einsteins/Fermi-Diracs laws or a mix of all of them?

What would be the mean frequency/wawelength?

Would the mysterious "dark energy" be a major contributor to the distribution?

If you were in deep space, i,e., a spot somewhere between galaxies, then the night sky would look a lot like the sky seen by astronauts in the ISS, when they look away from both the ecliptic plane and the galactic plane, minus the individual Galactic stars. That is, it is like our deep sky photos in those directions that are dominated by galaxies, but no atmospheric distortions, no night sky lines, and no zodiacal light. The spectrum is dominated by different things at different wavelengths, but basically it is the sum of the light of galaxies and perhaps intergalactic stars that escaped their galaxies. At long radio waves, it is dominated by supernova remnants and AGN as self-absorbed synchrotron radiation, peaking between 1 and 10 Mhz (Simon 1977). The mm band is dominated by the microwave background radiation at 2.7 C. The far-ir is dominated by cold galaxy dust at 60 microns. The optical is dominated by galaxy thermal starlight at 1 micron. The UV is dominated by hot stars at 0.2 microns (see summary). The Xray spectrum from 3 to about 45 keV (Marshall et al 1980, Fabian 1992) is well-fitted by a ~40 keV thermal bremsstrahlung model. Above 45 kev the spectrum falls and is thought to be the sum of many AGN at all redshifts. The spectral energy density (SED) from radio to X-ray is shown in this diagram from the paper by Hill et al. (2018) The Spectrum of the Universe: 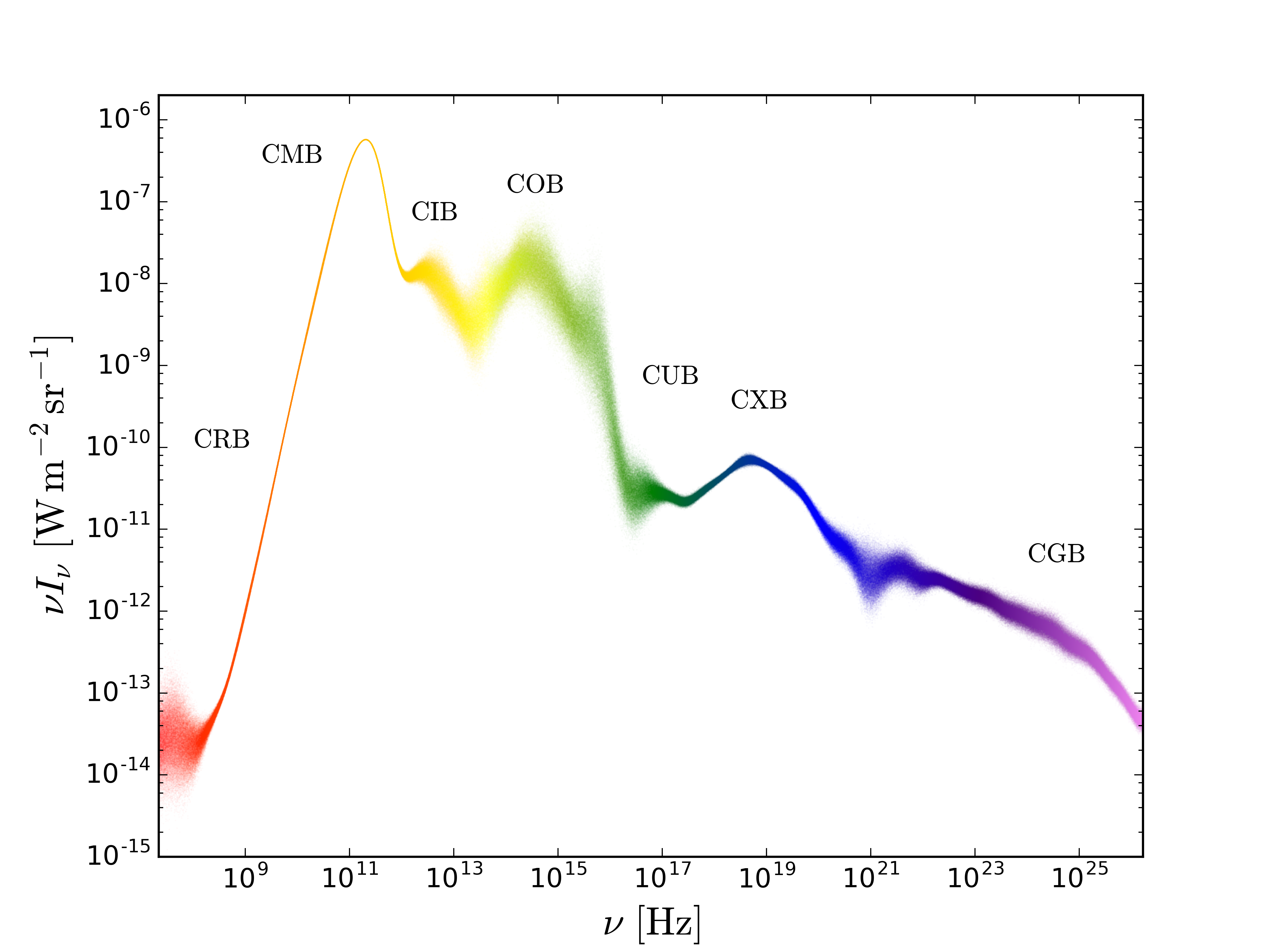 The width of the line in the diagram shows the present uncertainties in the measurements.

Dark energy does not shine, it has an effect on the redshift as a function of time and thereby indirectly affects the shape of the background spectrum.

Not the answer you're looking for? Browse other questions tagged radiation interstellar-medium wavelength cosmic-microwave-background or ask your own question.