What would happen if someone had a telescope and watched Betelgeuse when it goes supernova?

Would that person go blind?

Neutrino detectors and the abundance of Neutrinos would detect the upcoming visible show about 3 hours before any visible signs, so there would be time to point certain telescopes that could handle the brightness towards it.

I'm curious if an individual with a telescope pointed in that direction would have an unpleasant surprise. Would the scientific community be wise to not announce the massive stellar explosion until after it's visible to avoid potential negative effects from over-eager amateur astronomers.

I realize this is a kind of silly question and it might depend too much on the telescope, but I'm curious.

No, it would not be a problem. Supernovae are not at all like flashbulbs – they brighten over a period of many days and dim again even more slowly. Here are a number of different light curves taken from Wikipedia: 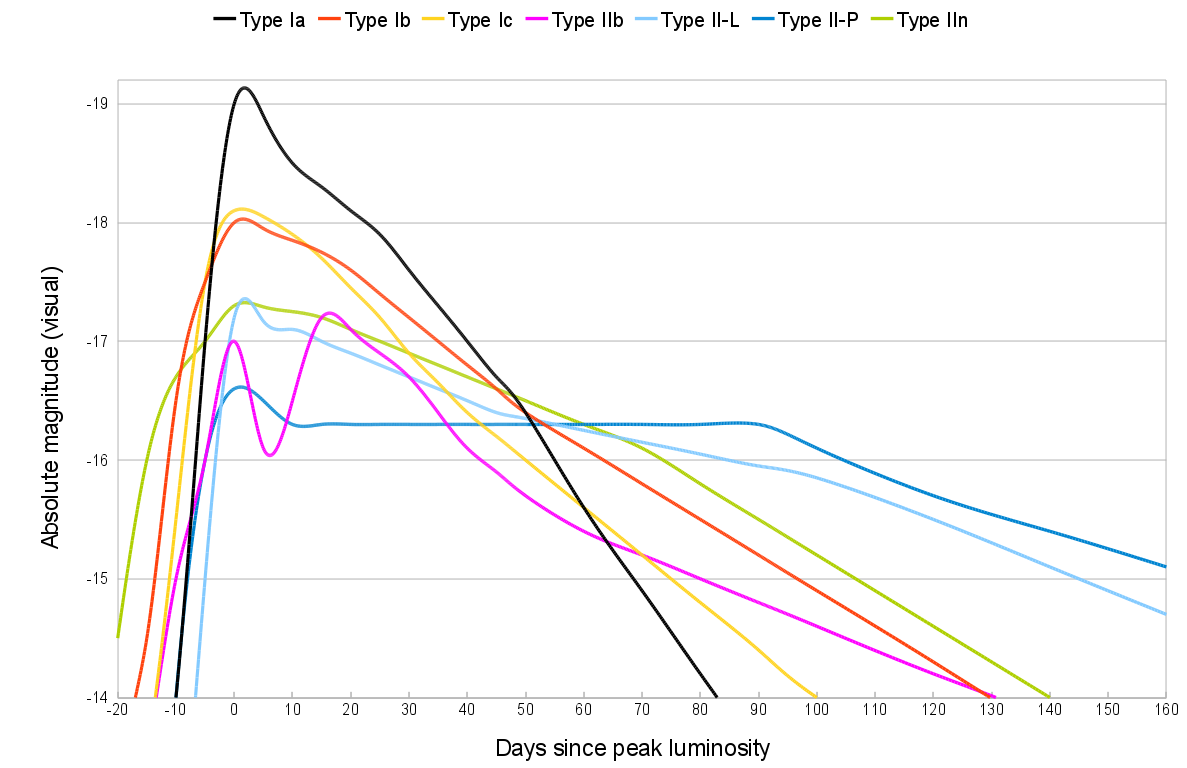 The rise is fast on an astronomical scale – several orders of magnitude over a period of roughly ten days – but very slow on a human scale. An amateur looking at it would not notice any significant change in brightness, but if the same person came back a few hours later or the next night, the change would be very evident.

As far as we can tell, the reason is that the light at peak brightness is caused by emissions from material blown off by the explosion. For example, in Type 1a SNe, most of the light is from the radioactive decay of the huge mass of ejected nickel-56 (half life 6 days).

The Wikipedia article on supernovae is quite good and covers this all in more detail.

If you insist on observing the exploding Betelgeuse at peak brightness, you could potentially damage your eye. The complete answer enters the realm of physiology. Here I'll discuss the astronomical parts:

However, the Sun is an extended source, spanning an angle of roughly $\theta_\mathrm{Sun} = 32$ arcminutes across. In contrast, Betelgeuse is a point source, which when transferred through the atmosphere and the telescope, is spread out over $\theta_\mathrm{Bet} \sim$ a few square arcseconds. Thus its light will be more concentrated; i.e. it will be much brighter, but it will hit a much smaller area of your retina. However, your eye will also move around, smearing out the light. Not being a physiologist, for the sake of this calculation I assume that the light is smeared out over a disk 1 arcminute across (about the size of a planet seen from Earth).

Hence, for our assumptions your eye will be damaged if you observe exploding Betelgeuse through a telescope with an area $\sim 3\,000$ larger — or roughly 55 times wider — than your pupil. In bright light, the pupil contracts to roughly 3 mm in diameter, so if observing through a telescope of 16 cm or larger, you could damage your eye.

Based on evolutionary models of Betelgeuse, Dolan et al. (2016) estimate an apparent magnitude of $m=-12.4$, i.e. roughly 6 times brighter than our estimate. This would mean that you only need a 7 cm telescope to damage your eye.

However, as Mark writes in his answer, supernovae don't increase to their peak brightness in matters of seconds, but rather in matters days (roughly half a mag per day), so you have plenty of time to look away.

Given the great distance, the decrease in brightness due to distance, and the countless amounts of dust & gas between earth and Betelgeuse, I think you'd probably be fine. You might be dazzled by its brightness -- a bit like looking at a light bulb, I imagine -- but I doubt it would cause any physical harm.

EDIT: I hope a real astronomer sounds off here. I'm not sure what kind of supernova we might expect from Betelgeuse, but apparently supernovas (supernovae?) can achieve a theoretical brightness equal to 5 trillion suns!

From Wikipedia: The visual light curves of the different supernova types all depend at late times on radioactive heating, but they vary in shape and amplitude because of the underlying mechanisms, the way that visible radiation is produced, the epoch of its observation, and the transparency of the ejected material. The light curves can be significantly different at other wavelengths. For example, at ultraviolet wavelengths there is an early extremely luminous peak lasting only a few hours corresponding to the breakout of the shock launched by the initial event, but that breakout is hardly detectable optically.

I'm not sure I'd want to be looking at Betelgeuse through a large telescope when this happens. Visible light is not what damages your eye. UV is.

Not the answer you're looking for? Browse other questions tagged telescope amateur-observing supernova or ask your own question.

9
Will the nebula of Betelgeuse be visible to the naked eye? How bright, how large, how soon, for how long?

0
If you're near a black hole and your time is slowed down, would a supernova be observable to both you and someone outside of the blackhole's pull?
6
What happens when a star gets hit by a supernova?
21
What observation can be expected on LIGO if any when Betelgeuse goes supernova?
8
What would the effects on or around Earth if Betelgeuse went supernova?
5
When Betelgeuse goes supernova, will the explosion hit any neighboring stars?
0
When a fast-moving star goes supernova, how will the resulting remnant evolve?
4
Why would someone choose a lower resolution grating over a higher one when performing spectroscopy?
6
Could someone explain what is wrong with my telescope, and what should I be able to see with it?