Why is Neptune true anomaly decreasing?

So I've been having fun with trying to determine where the perihelia of different planets are (using JPL Horizons).

And by the time I got to Saturn, something weird started happening. I've noticed that at some moments true anomaly (that I've used to track perihelion time) started falling rather than rising. I've also noticed that it seems to be only a slight effect, which also demonstrated ~ 17 days period. So I though: perhaps that's the effect of Titan, right? Problem solved.

Yet now I look at Neptune's true anomaly (see the last column on the picture) and have absolutely no idea what's going on. Can somebody explain, please? How is something like that even possible? It's like the planet decided to go backwards for a change. 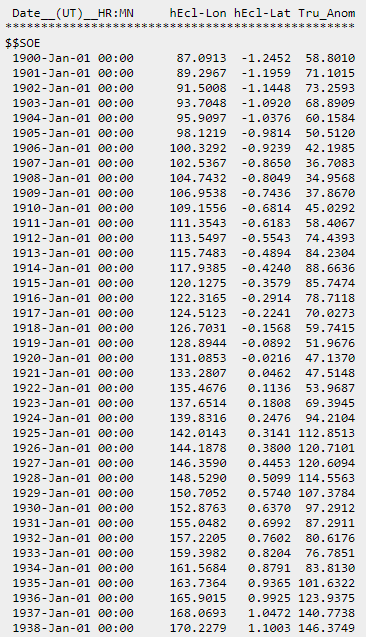 If you run HORIZONS w/ the following parameters:

Both of these occur because Neptune's argument of the perifocus (from which both anomalies are measured) is itself jumping around quite a bit.

Except when Neptune is actually at perihelion, the argument of the perifocus is a theoretically computed point, not representing any actual physical quantity.

The function NASA uses to calculate the argument of the perifocus is oscelt, and specifically notes:

6) If the eccentricy of the orbit is very close to but not equal to zero, the argument of periapse may not be accurately determined.

To summarize, using the true anomaly to determine's Neptune's position is a bad idea, unless you also account for the changing argument of the perifocus.

As you note, Neptune's ecliptic longitude behaves much better, because the zero point of the ecliptic, which, while based on the Earth's precession and thus not completely fixed, nonetheless moves very slowly, much slower than Neptune's orbit.

Of course, the "best" coordinate system to use is something like ICRF, which is unchanging with respect to the fixed stars.

Not the answer you're looking for? Browse other questions tagged orbit orbital-mechanics orbital-elements neptune or ask your own question.

15
Why does Neptune only have one major moon?
2
Is Earth's true anomaly roughly 1 degree currently?
5
Diamonds in Neptune?
3
Why is true and average anomaly of planet important?
6
Kepler's equation and eccentric anomaly
1
How do different formulas for calculating the mean anomaly of an elliptic orbit correlate?
1
Why are the moons of Neptune sorted by diameter?
6
Why is the magnetic axis of Uranus and Neptune off center?