What is this "time travel" these popular blogs refer to?

I am getting confused by some "popular science" about time travel, such as

or "Time Travel Is Real. Here Are the People and Spacecraft Who Have Done It": 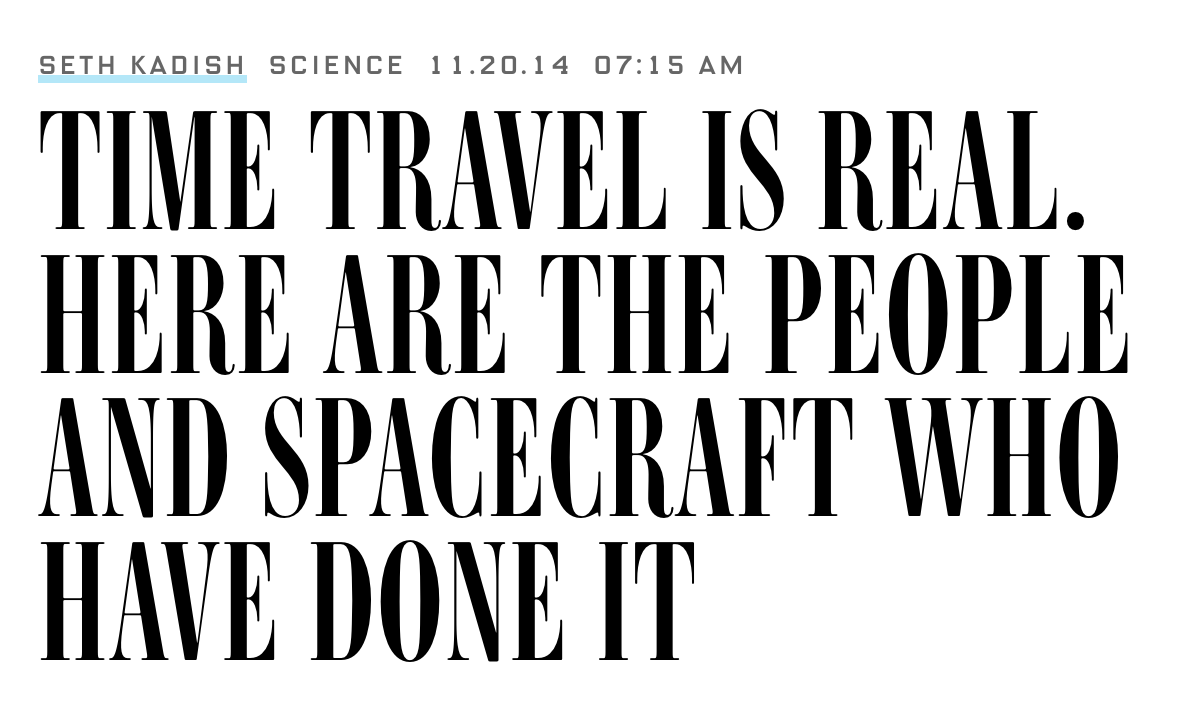 It is indeed an interesting property of physics as we know it, and a great gift from the theory of relativity. It leads to useful perspectives on the nature of time as exemplified in the Twin Paradox example: When you travel for instance at a Lorentz factor of γ = 100 (99.995% the speed of light) for 10 years, time "dilates" to thousand years. For instance it has been proven experimentally that muons would "tick" slower, and therefore for a measure of time in seconds. Similarly, I would assume that extending this property at a macroscopic scale, your whole body would slow down...

My question is to know if will you "live for a thousand years" (internet abounds of such statements as in this example forum and may be interpreted as such in the headlines above), or rather that during the 10 years of your travel (in your spaceship) and which would be measured as 1000 years in another frame of reference (the earth), you would have aged by "only" 10 years in your spaceship - time "froze" during the travel.

My question is to know if will you "live for a thousand years" (...) or "only" 10 years in your spaceship - time "froze" during the travel.

Is it a scientific fact?

Human time travel is a very real scientific fact, but the implications are too complex to be presented to the public sphere since it has no practical applications yet. If we were to sent people to another star system (Alpha Centaury A/B - at 4.3 light-years from Earth), accelerating their ship close to the speed of light would make the time in their frame of reference pass slower relative to the outside of their frame of reference, thus allowing them to reach the destination in a shorter time from their perspective. It would be useful when managing supplies on this vast journey.

Saying that time "froze" is a poor way to put it. To "freeze" means to stop entirely, but time only slows down. Also, saying that you could "live for a thousand years" is a very poor way to put it, because that makes it sound like you could experience a thousand years of life, which is false. What is true is what you say here, assuming you travel at the correct speed:

No one knows if we will ever be able to travel at these speeds.

They're referring to Time Dilation. The faster you go the slower time is moving for you. If you were to reach the speed of light for you time would come to a dead stop.

These popular books refer to the moving of people from the present, past or future to any other willingly or intentionally. The world we are currently living in is the present. We move towards the future at an almost constant rate that is 1min/minute(say). If by some reason some people found out how to travel slower or faster than this normal rate, they are able to travel in time. Physical laws of physics have no such limitation or rule that this cannot happen, its the engineering and machinery which lacks the ability to do so. Even so, there are some quite interesting stuff which might happen if you went in future or past. These movements through time introduce paradoxes which are hard to wrap our heads around. Like, the very famous of them all--Grandfather Paradox, where you travel back in time and somehow prevent your grandparents from the meeting. This generates a question, who was the person who prevented the meeting in the first place? There is a very good explanation thought up by our scientists that, the time you go which you regard as past is actually a parallel universe and in no way affect the reality of the time from which you came from. Its said that we will not be able to travel to the past, but we can travel to the future quickly. This can be achieved by living inside a high gravitational field where time slows down making you travel through time slowly with respect to others. These ideas are thought upon and modified a bit according to the imagination of the authors to provide a new version to it, making it interesting to read.

Not the answer you're looking for? Browse other questions tagged time-dilation time or ask your own question.

0
What does the coordinate of time really mean?
3
What time and where on earth is the latest solar noon?
5
What effect does time dilation have on bodies orbiting close to Black Holes?
5
What is the difference between Terrestrial Time (TT) and International Atomic Time (TAI)?
9
Could a star closely orbit a black hole long enough for the star to have lost 0.5B+ years to time dilation?