What observations will be done during the New Horizons flyby of Ultima Thule?

On New Year's Eve 2018, the New Horizons spacecraft will fly past Ultima Thule (2014 MU69) at about a third of the distance it flew by Pluto some years ago. So it should be able to get some detailed photographs, but the closing speed is rather high. What scientific observations will be done during the flyby?

Is it a case of a couple of snaps, assuming the camera is pointed correctly? Or is there more that can be done? Any other instruments that will get useful data?

Emily Lakdawalla in her Planetary Society blog post of 17 December describes fairly well what we can expect:

A few precious data downlinks in the days before and after the flyby will contain some small photos from New Horizons’ Long Range Reconnaissance Imager (LORRI), which takes grayscale snapshots. Lower-resolution color comes from the Multicolor Visible Imaging Camera (MVIC), a component of the Ralph instrument. The first images that we get back from New Horizons will not be the best images that New Horizons has taken.

Because of the uncertainty in the position of MU69...

... the real position of the body may be completely outside the field of view of a photo focused on the predicted position. In order to make sure it doesn’t miss the target, the spacecraft will have to scan its instruments across a region of space in which it is most likely to find the tiny world, taking a lot of data on empty space to make sure to get data on the object.

She shows what to expect in the days around closest approach, using comet 67P images as an example: 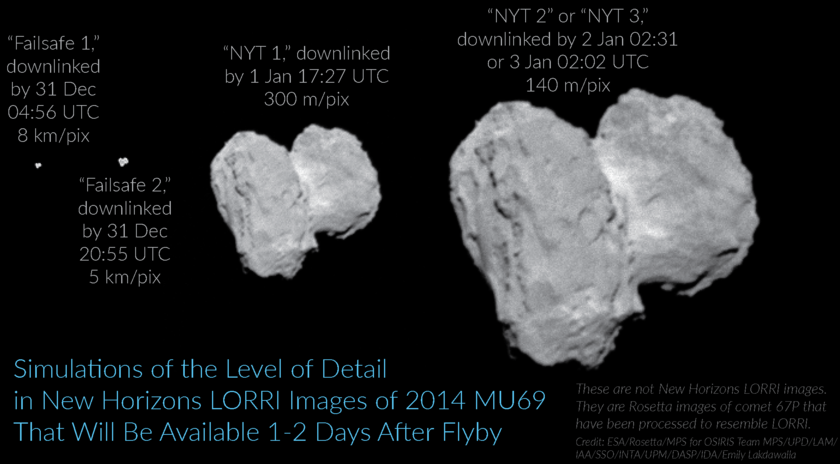 The Core phase will last 10 days, from 24 December to 2 January. Nearly all of the science will happen in just a 2-day period around closest approach, with intense imaging and spectroscopy to map MU69, study its composition, figure out its rotation rate and pole, and search for dust, rings, and satellites

Several things will make the MU69 flyby significantly more difficult than the Pluto flyby. MU69 is small, dark, and faint. New Horizons won’t see it as more than a dot until 3 days before closest approach. MU69 is darker, and the sunlight dimmer, than the LORRI camera was designed for. Also, because MU69 is so small, New Horizons has to pass much closer to it than it did at Pluto in order to see interesting detail on the surface, resulting in a rapidly changing viewpoint near closest approach.
As a result of all of these factors, LORRI’s images may be a little smeared and will be noisier than we saw at Pluto. MVIC is less affected by these challenges; the way that MVIC works, it’s possible for New Horizons to compensate for the low light and high speed by sweeping more slowly across MU69 to build up a stronger signal.

Other measurements to be made are:

Toward the end of 29 December, science data gathering will really begin. A dense set of observations will gather a lightcurve on MU69, a measure of how its surface appears to change with rotation, over a period of about 6 hours.

30 December will see another 6-hour block of science, a mix of color imaging, deep satellite searches, and lightcurve data. The same happens early on 31 December, after which New Horizons enters the most intense, Inner Core phase of the flyby.

You should read the blog post for all information, because she gives much more detail than can reasonably be quoted here.
She also quotes more resources.

Here is another simulated image of Ultima Thule, showing how the primary camera aboard NASA’s New Horizons spacecraft will “see” the Kuiper Belt object as it approaches for a 1 January flyby: 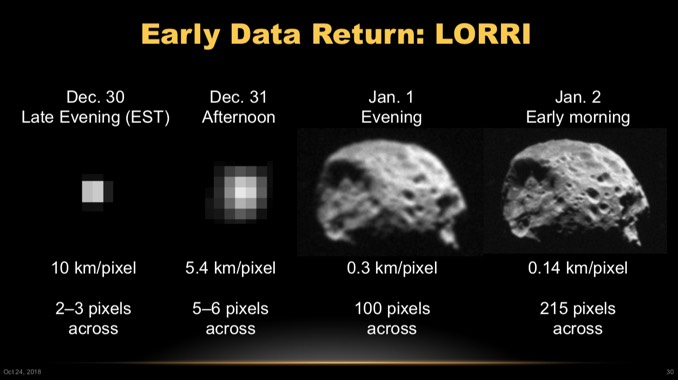 Here is the operations time line overview for the approach:

That flyby distance decision has now been made: the spacecraft will remain on course for a 3500 km flyby.

Not the answer you're looking for? Browse other questions tagged kuiper-belt or ask your own question.

4
What's to be gained from the New Horizons mission once it's beyond the Kuiper Belt?
7
Strange speck of light in the picture sequence of the approach to 2014 Mu69 (Ultima Thule)
15
What caused this mysterious stellar occultation on July 10, 2017 from something ~100 km away from 486958 Arrokoth?
1
Where will the frost line be when the Sun becomes a red giant and what effect will it have on the solar system?