What experiment does this "Tracing the History of Starlight" video try to explain?

The YouTube video Tracing the History of Starlight with NASA's Fermi Mission describes observation by the Fermi gamma ray telescope of EBL (extragalactic background light) gamma rays from 2,000 Blazars. It seems to suggest that they used an attenuation measurement of the gamma rays to determine... I'm not exactly sure exactly what was determined by the investigation discussed in the video.

The attenuation is due to reverse pair-production, two photons in, and an electron-positron pair out. I am not sure if they measured 511 keV gamma rays from subsequent annihilation of the positrons, or attenuation of the primary gammas, and I am also not sure if the experiment was used to measure the primary gamma ray rates, or the total density of UV-Vis-IR light photons with which the gamma rays annihilated.

Question: Is there a simple but physically clear way to explain all of this; the experiment the video is supposed to be explaining?

How do they differentiate attenuation due to revere pair production from attenuation by say Compton scattering considering dust and gas? 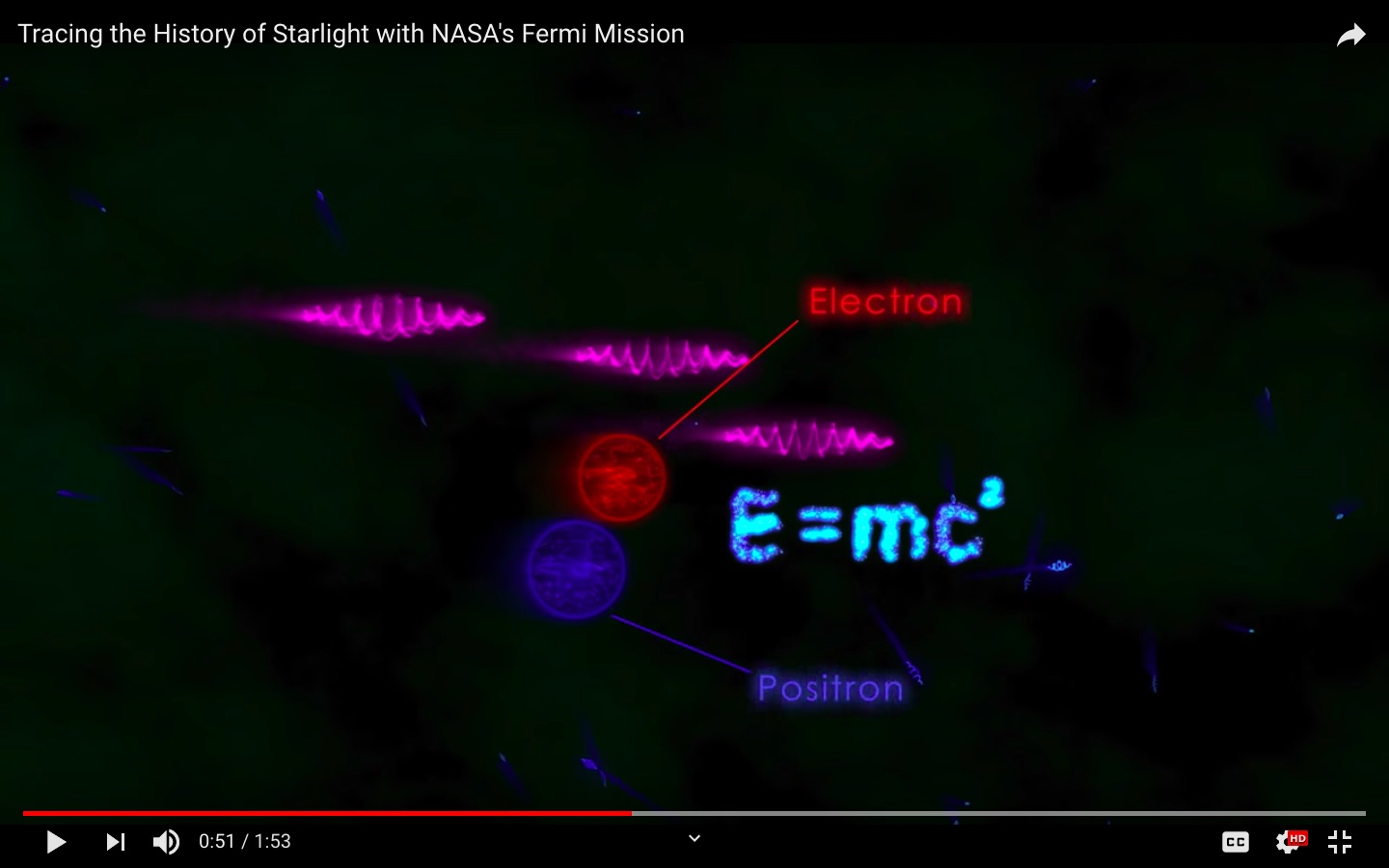 Let's first look at which kind of sources are studied.

Blazars are special type of radio-loud AGN. One of their special properties is that their spectral energy distributions (SED) form the so-called Blazar sequence. They all have a characteristic double peak SED and the position of the peaks mainly depend on their luminosity. The higher the luminosity the lower the peak frequencies (see Fossati et al., 1998 for details) 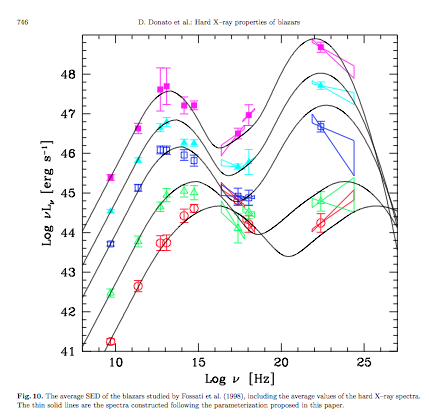 Leaving details like sub-classes aside, this means that SED of Blazars can be modelled very well, especially if looking at a huge ensemble of Blazars.

Now the high energetic light has to travel from the Blazar to us. The Blazars being far away, much can happen during this travel, notably it can interact with the extra-galactic background light (EBL absorption). If a high energetic photon from the Blazar encounters an EBL photon in the optical or ultraviolet range they can pair produce an electron/positron pair (this is the dominant process for the involved energies). 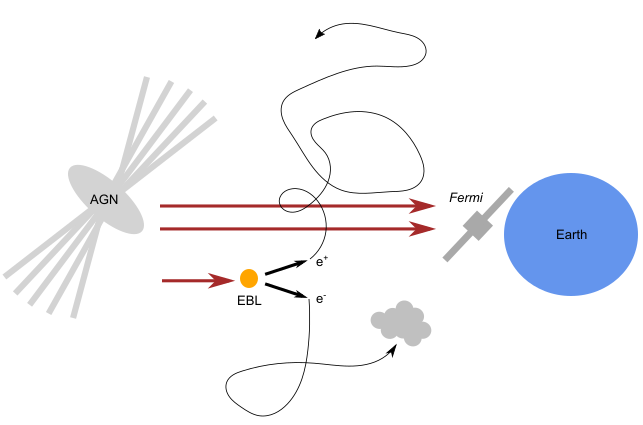 These charged particles will most likely be subject to magnetic fields or other interactions diverting them from their direct way towards earth.

This means not all of the high energy photons from the Blazar reach Earth and how large the absorption is depends on:

Fermi looked at a large sample of SEDs from Blazars of various luminosities and grouped them based on their place in the Blazar sequence. For each group they could compare the expected SED from the Blazar model with their measured SED and thus determine how large the EBL absorption is depending on the energy. This allows to calculate the density and energy distribution of the EBL.

Knowing the spectral energy distribution and density of the EBL allows to go even one step further and make assumptions on where the photos in the EBL came from. How many stars it took, how long they had to emit photons etc.

As if this alone would not already be interesting enough, Fermi even repeated this for samples of Blazars at different distances, thus probing the EBL at different ages of the universe (remember that we observe the light that reaches the Earth now, thus the light from Blazars further away was emitted earlier than the light from "nearby" Blazars) 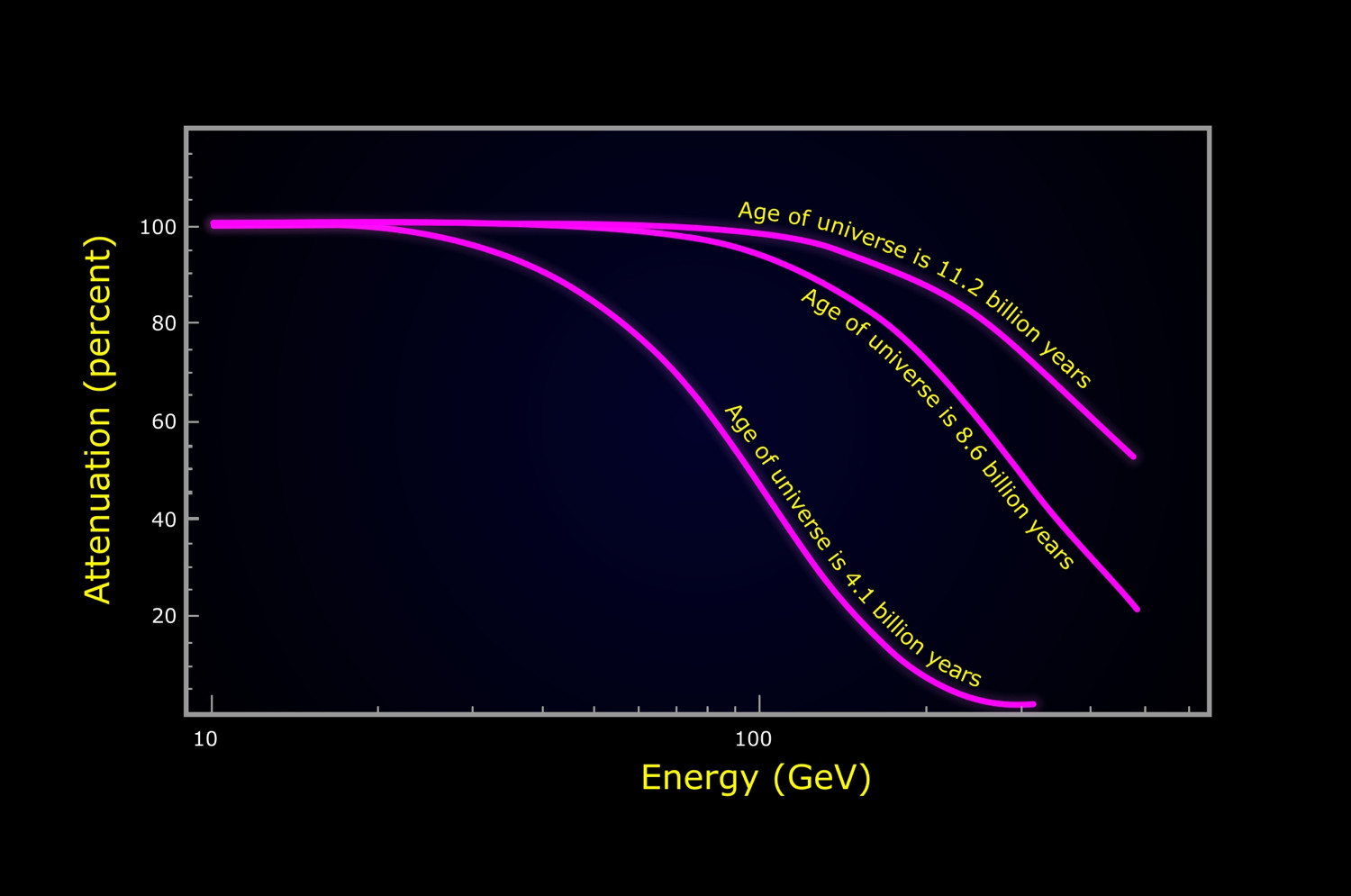 Not the answer you're looking for? Browse other questions tagged astrophysics dust active-galaxy gamma-rays or ask your own question.

2
In what ways does the mass and energy of the milky way curve space time?
2
What does the word "compact" mean in astronomy/astrophysics?
4
What irradiance does the Moon receive during a total lunar eclipse?
12
How did they make a video of the center of the galaxy, and what is it exactly that's flashing there?
4
What is the effect of this expanding universe on the energy density of it?
1
What does "the depth of the 13.0 Å feature differs by 7 sigma from zero" mean?
1
What is the meaning of grain opacity and why does it affect the formation time of gas giants?