Gravitational acceleration inside a planet

The gravitational acceleration, g, inside the Earth generally decreases with decreasing distance to the center: 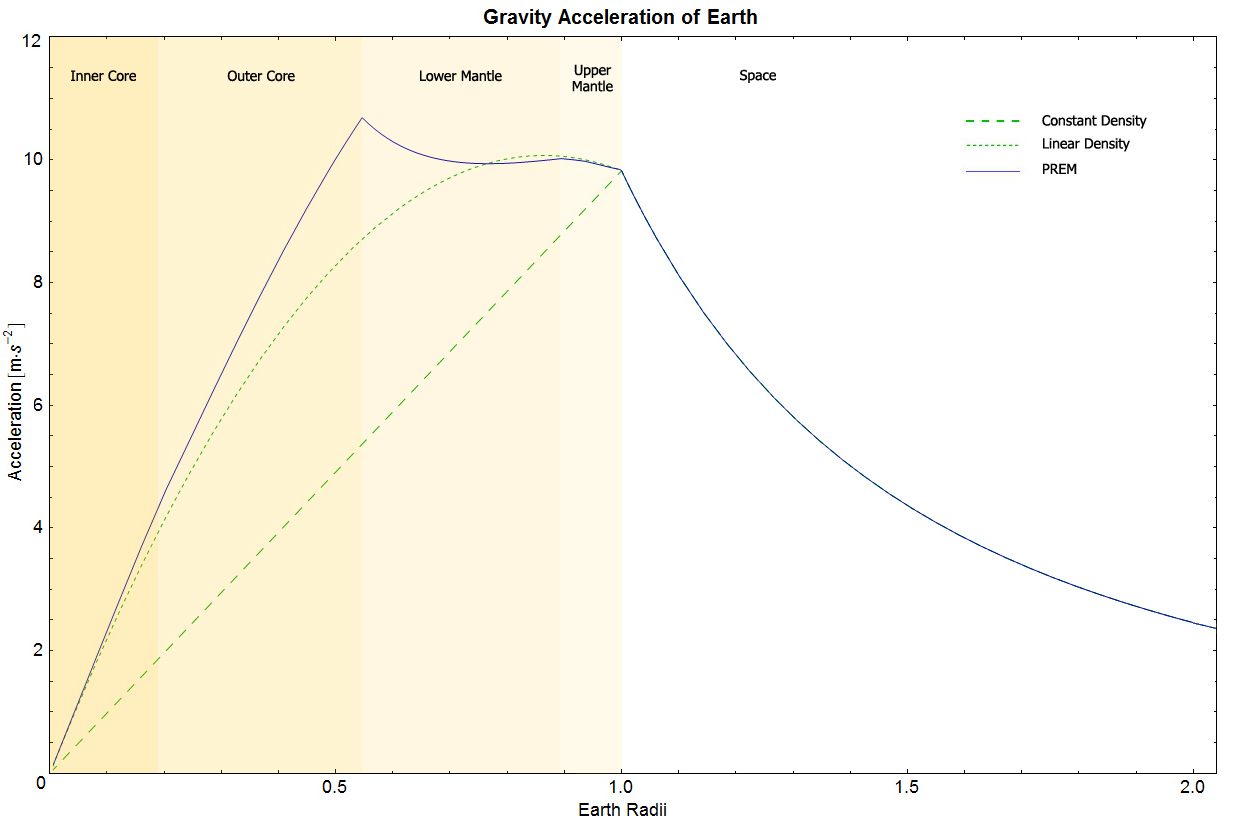 However, apparently for Jupiter, the gravitational acceleration only increases with decreasing distance to its center. Why is this?

You can use Gauss's law for gravitation to work out the gravity as a function of (interior) radius. $$ \oint \vec{g} \cdot d\vec{A} = -4\pi G \int \rho\ dV\ .$$ What this means is that the flux of gravitational field $\vec{g}$ out of a closed surface is proportional to the mass enclosed within that surface.

Now we are in a position to answer your question. In the Earth's deep interior $\alpha \simeq 0$ and the density does not increase greatly as we head towards the centre. This means that $g(r) \propto r$ as is seen in the plot you reference. In the outer part of the crust $\alpha \simeq -1$ and $g(r)$ is roughly constant.

Below is a model density profile for Jupiter (solid line). 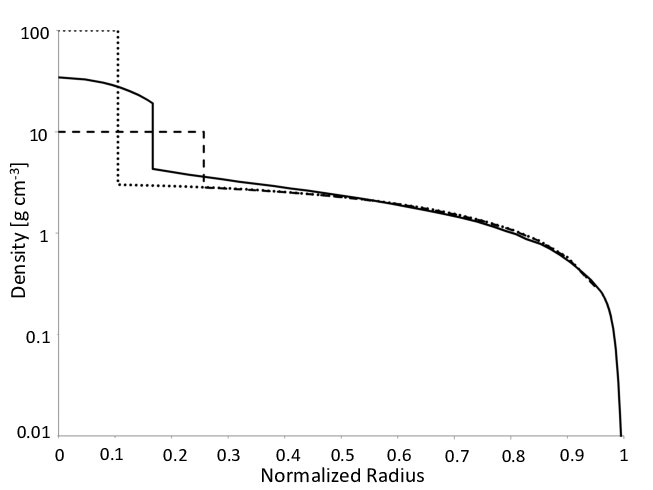 Just looking at this I would say that $\alpha$ is just a bit $<-1$ for most of the interior and so the gravity should be increasing slowly as $r$ decreases, but there is a sharp uptick in density at the boundary to the core which would see $\alpha \ll -1$ and the gravity becoming proportional to $r$ to the power of a negative number (i.e. increasing strongly with decreasing $r$), but then must drop to $g=0$ when $r=0$ shortly afterwards.

The short answer because Jupiter is a gas giant, so it's kind of got a very large atmosphere and atmosphere's aren't very dense. Also, if you look at your chart, the gravitation inside the Earth increases until you get to the outer core. This is likely to be much more pronounced on gaseous bodies like gas giants and stars.

In layman's terms, if we use Newton's shell theorem, you can ignore the mass "above" you because the shell of matter with a greater distance from the central point than you has a close to zero gravitational effect on you. Technically that's a shell of mass around you but I'm going to call it "above" cause it's easier to say.

As a result, looking at the gravitational field, you can just take into account the mass below you and the radius and ignore the shell above you.

If, for example, you tunnel 10% into a planet, using the law of cubes, 72.9% of the planet's volume is below you, but you're 11.1% closer to the center, using the inverse square law, that's 23.4% greater gravitational pull from the 72.9% of planet that remains below you than you'd get from that 72.9% if you were on the planet's surface.

If the 72.9% of the planet below you weights more than 81% of the planet's mass, then gravity increases. Lets say it weighs exactly 81%. 81% of the mass x 1.234 greater pull at 10% closer works out exactly the same. In other words, if the mass above you is light enough, then gravity increases as you tunnel or fall inside a planet. There's likely a pretty simple logarithmic ration between density ratio and where the gravity stops increasing. If I can work it out, I'll post it.

In the case of Jupiter and starting near it's equator, with Jupiter's rapid rotation, that should be taken into account as well. In the case of Earth, Earth's rotation is pretty negligible relative to it's gravity and can be ignored unless you want high accuracy.

With planetary bodies, density can play a bigger role than mass regarding surface gravity. Mercury, for example, is about 52% the mass of Mars, but it 38% denser, which enables it to have a slightly higher gravitational pull on it's surface than Mars.

Two people have pointed out that they're not sure the gravity really does increase inside Jupiter. I'm sure it does because the density deep inside Jupiter likely increases significantly. We can't get a good look at the inside of Jupiter, so precise numbers are impossible, but it seems very probably to me that the gravitation increases much of the way inside Jupiter, only beginning to decrease when the core reaches considerable density.

The majority of Jupiter's external layers is hydrogen and hydrogen, even under very high pressure, is not very dense. At 700 atm, for example, and Earth temperature, not hot temperature deep inside Jupiter, Hydrogen still has a density of less than 1/10th the density of water. The mass of Jupiter's outer layers are almost certainly too low to have as much gravitational effect as the denser inner parts when you take into account falling into the planet.

Planets like Uranus or Neptune, which much less hydrogen and helium - probably not as much, but for gas giants and most stars, gravity very likely increases considerably for a considerable percentage of their radius, for an object falling inside of them.

No idea whether that's true or not for Jupiter. However, it is theoretically possible if the outer layers of the planet are much less dense than the stuff underneath. In that case the shell theorem applied to the outer layers does not remove much gravity, while the gravity from the inner parts increases fast due to the inverse square law.

Even for the image you've posted, gravity increases in the lower half of the lower mantle, close to the outer core - and for the same reason. Stuff in the outer layers is "fluffy", stuff in the core is dense.

Not the answer you're looking for? Browse other questions tagged gravity earth jupiter newtonian-gravity or ask your own question.

21
Is Jupiter made entirely out of gas?
2
What is the radial dependence of the density of Jupiter or Saturn?

12
What was the length of year 1 million years back?
7
How does the Grand Tack Hypothesis explain how Jupiter formed inside the frost line?
5
Gravitational lensing in Newtonian physics
2
Why doesn't Jupiter increase the chances of an asteroid to strike the Earth?
6
Precision of geocentric gravitational constant
5
Theoretically could the expansion of the universe affect acceleration due to gravity?
3
Helium rain inside metallic hydrogen within Jupiter, conditions and experiments?
8
How strong are the tides raised by Io on Jupiter relative to the ones raised by the Moon on Earth?
2
Scholarly work on the gravitational disruption of a rocky planet by a close pass with another planet?
13
Why do gravitational waves travel "only" at the speed of light but the gravitational scalar potential is instantaneous?