How long does it take for a white dwarf to cool to a black dwarf?

I was reading on white dwarfs, and I came across this sentence—

Without energy sources, the white dwarf cools to a black dwarf in a few billion years.[1]

However, when I looked into the Wikipedia page on White dwarf, it says

Because the length of time it takes for a white dwarf to reach this state is calculated to be longer than the current age of the universe (approximately 13.8 billion years), it is thought that no black dwarfs yet exist.

So which is true?

And what is the proper definition of a black dwarf?

I don't think there is an accepted definition of a "black dwarf" - it is not a term used in the scientific literature.

A popular definition that appears to circulate on the internet is that it is a white dwarf that has cooled down to the extent that it no longer emits any radiation in the visible part of the spectrum. But this is an unworkable theoretical definition. Even the coolest objects emit some radiation in the optical part of the spectrum; whether or not it is detectable will depend on the size of the object and how far away it is from us.

If a black dwarf is simply to be given the practical definition of being unobserved/unobservable at visible wavelengths then such objects exist already. Kaplan et al. (2014) have found evidence for a $\sim 1M_{\odot}$ white dwarf companion to a pulsar that they are unable to detect at visible wavelengths even with the Keck telescope down to an absolute (red) magnitude of $M_R>19.1$.

They argue that this means the white dwarf has cooled below 3000 K. This is possible within the age of the universe because more massive white dwarfs cool more rapidly because their higher interior densities lead to more rapid crystallisation and a steep decrease in their heat capacity when they enter the Debye cooling regime. A more typical old white dwarf of mass $\sim 0.6M_{\odot}$ would still be at a temperature of $\sim 4000$K and emit a reasonable amount of light at visible wavelengths. 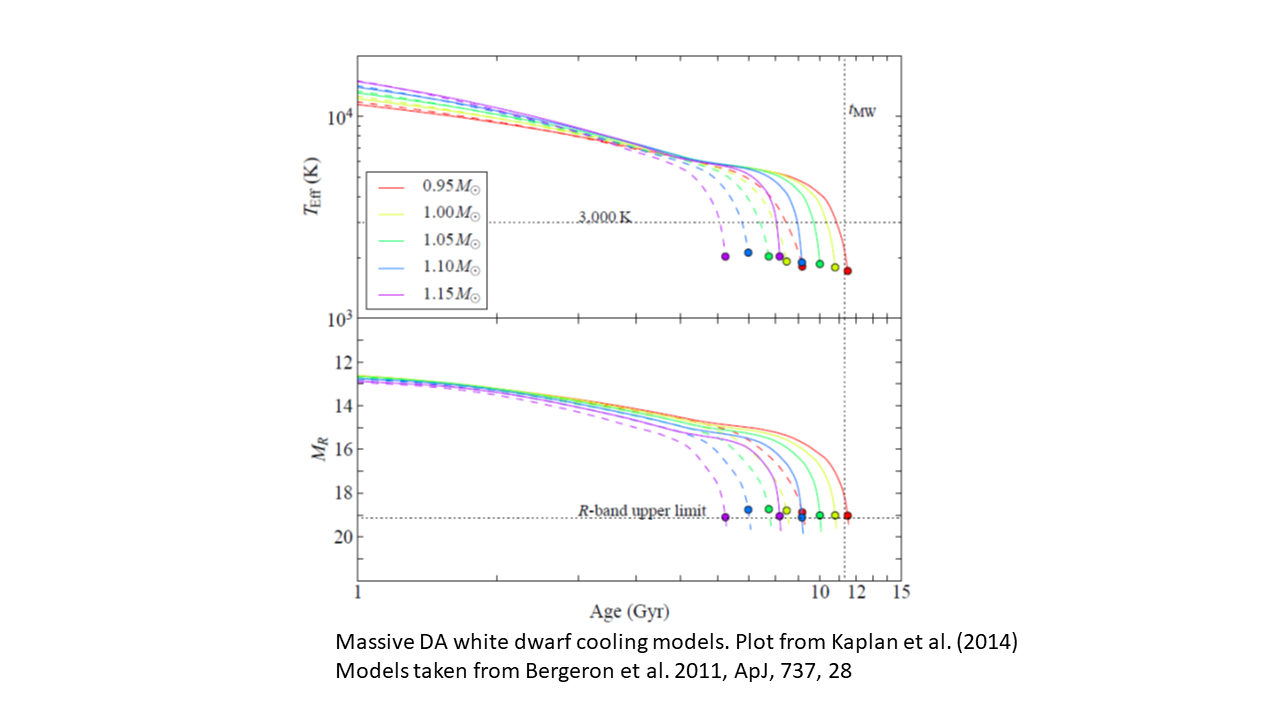 To address Mark Foskey's point: Once in the Debye cooling regime, the cooling rate hardly slows because the heat capacity is $\propto T^3$, whilst the luminosity is roughly $\propto T^{3.5}$ (here, $T$ is the isothermal interior temperature). Luminosity is also $\propto T_s^4$, where $T_s$ is the surface temperature.

Putting this together, we find that $dT_s/dt \propto -T_s^{3/7}$ and so the cooling rate does not change much once Debye cooling starts. As a consequence the temperature plummets as $T_s \sim -t^{7/4}$ and the time taken to cool well below 1000K from 3000K would only be a few times longer (maybe a billion years) than the time to cool from 4000K to 3000K (as suggested by a simple by-eye extrapolation of the models shown in the plot).

The same treatment in the "Mestel" cooling regime, where the heat capacity is constant yields a much shallower $T_s \sim t^{-7/20}$, and accounts for the sharp "knee" at the onset of Debye cooling.

I think what you need is here on the Wikipedia. In section "Radiation and cooling," it says "The rate of cooling has been estimated ... After initially taking approximately 1.5 billion years to cool to a surface temperature of 7140 K, cooling approximately 500 more K ... takes around 0.3 billion years, but the next two steps of around 500 K ... take first 0.4 and then 1.1 billion years."

One takeaway is that the rate of cooling (giving a fixed change in temperature, i.e., every 500 K) is increasing non-linearly. This is because the cooling is governed by diffusion process. So, at low temperature, to cool down 500 K more would take very long time than what it did in the past.

As someone said in the comment, there is no precise definition of a black dwarf. So, I would not say who is right or wrong without understanding how they define the cutoff.

However, if you roughly define it to be at the level that its color temperature passes beyond the visible wavelength (i.e. >7000 A or < 4000 K), and if you follow the info mentioned above by extrapolating from about 5500 K and assuming the rate of changing 500 K is constant as what it did in the previous step (i.e., from 6000 to 5500K taking 1.1 billion years), approximately we get the upper limit for cooling from 5500 to 4000 K as 3 billion years. By adding about the previous 2 billion years from the initial temperature down to 5500 K, we have >5 billion years for a white dwarf from its initial state down to about 4000 K. Note that the 5 billion is a lower limit because we did not consider non-linearity.

(Note that you can also approximate the non-linearity effect by assuming an increment of 1 billion years in each step implying by the step 6000-5000 K. By doing this, the lower limit would be >7 billion years.)

Since the age of the universe is 13 billion years, whether you believe that a black dwarf exists or not depend on i) definition, ii) rate of cooling, and iii) variation (which means there might be a white dwarf that was born cool or living in the environment that supports better cooling than the typical population).

I think the most important part of any answer is that, as Rob Jeffries said, "black dwarfs" aren't really a thing in the astronomical literature, and I suspect that's the reason that you get different answers about how long it takes to become one. Different people come up with different thresholds for becoming one.

I would argue that 3000 K is too hot to call something black. The filament of a glowing light bulb is cooler than that. According to Wikipedia, "virtually all solid or liquid substances start to glow around 798 K (525 °C) (977 °F), with a mildly dull red color". I have not been able to find a reference for the theoretical time required to cool to that temperature.

Not the answer you're looking for? Browse other questions tagged stellar-evolution white-dwarf or ask your own question.

3
Black dwarf binary systems
2
How can white dwarf form Oxygen ? (Temperature problem)
2
white-dwarf merge in binaries
6
What does a black dwarf look like?
0
What is a cold white dwarf?
0
Is the structure of crystalized white dwarf related to nuclear pasta?
1
White Dwarf/Degenerate Gas Behaviour
7
Exactly how long does it take for the exposed core of a star to cool from its starting temperature (several billion K) to ~50,000 K?