Why is it impossible to estimate the inclination of an exoplanet with the Radial Velocity Method?

The formula of the radial velocity is:

It's well known the usual procedure. You have data about the instances $t_i$, the radial velocities $v_i$ at time $t_i$ and then you also have the measurements uncertainties $\sigma_i$. With that data, you can estimate 6 parameters: $V$, $K$, $e$, $\omega$, $T$ (the periastron passage time) and $P$. After you estimate these parameters, you can calculate (if you know the mass of the star and you assume that $m_p<<m_s$), $m_p\sin i$, which is known as the minimum mass. So, as far as this way shows, you got no way to estimate the mass of the planet and the inclination separately.

But what if instead of estimate this set of parameters, we introduce another one? Just one with all the parameters in the equation: $V$, $m_p$, $i$, $e$, $T$, $\omega$, etc.? Couldn't that be possible? But nonetheless, it's always assumed that it's impossible to know the inclination with the RV data. Is there some reason why?

Essentially the problem comes down to geometry: radial velocity provides a 1-dimensional view of a 3-dimensional system. See the diagram below: 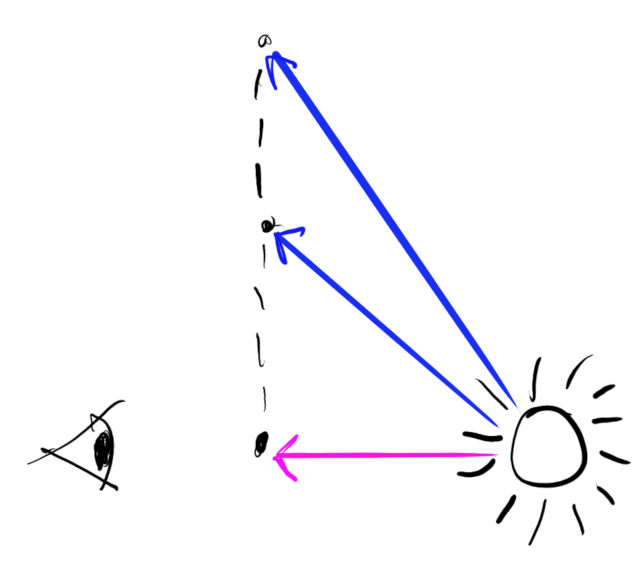 No matter how you define your variables, you will always run into this issue because it is inherent to the geometry of the situation.

This does break down in the case of planet-planet interactions, which can break the degeneracy here (a good example of this is Gliese 876).

I am not sure what you meant by "introduce another one." The system of equations is derived simply from Newtonian mechanics, and it is already completed in itself. So, my guess answer is, no that is not possible.

I think Figure 2 here is a good one to have in mind when thinking about this.

The nature of RV data is that you have a bunch of data points specifying (vi,ti). From there, you can get P straightforwardly. There was a post I saw recently asking how to get P from RV data, you might want to check it out. Or, simply google.

V is something that is observable or known because it is just a Hubble flow.

So far from $K(m_p,m_s,e,P,a,i)$, we know $e,P$. I am not sure how to estimate $a$ but it does not matter because the leftover degeneracy between $m_p, i$ at the nominator of $K$ cannot be broken unless you can estimate one of the two (given that $m_s$ is known as you mentioned).

That is the reason why you can only do the minimum mass from RV data.

Let's assume we had a mathematical method that could separate the planet's mass from the inclination of the planet-star system.

But this cannot be true for the Radial Velocity Method since for inclination $i = 0$ ($sin~i = 0$) the planet's motion in the line of sight is $0$ and hence the radial velocity measurements give the same result ($0$) for all planet masses.

Not the answer you're looking for? Browse other questions tagged orbital-elements radial-velocity or ask your own question.

5
Is there a preference for orbital planes of planetary systems to be aligned with the galactic disk?
5
How are exoplanets with 10,000 day periods discovered with the radial velocity method?
3
Calculate the orbital phase when plotting the Radial Velocity data of a transitting exoplanet
0
Doppler Spectroscopy - Finding mass of an exoplanet
3
How to calculate the argument of perihelion for exoplanets with incomplete orbital elements?
2
How does one calculate inclination from a graph of radial velocity?
10
What are the challenges in finding Earth-like planets via the radial velocity method?
1
derivation of binary mass function for eccentric orbit