How did they make a video of the center of the galaxy, and what is it exactly that's flashing there?

The ESA video ESOcast 173: First Successful Test of Einstein’s General Relativity Near Supermassive Black Hole includes a clip of images of stars at the center of our galaxy orbiting around SgrA*, a presumed supermassive black hole. This isn't visible light because it's obscured by dust, so it may be radio or long wave infrared, but I don't know.

In the middle, I can see something flashing at whatever wavelength this image has been produced from.

Question: How are these images obtained?

Later in the video the narrator says they took the images using ESO's VLT.

03:40 [Narrator] 14.​ Making these measurements pushed the power of ESO’s Very Large Telescope to the limits.

Over the whole observation period multiple telescopes and imaging instruments were used. Early observations were accomplished using the NTT. Since around the year 2002 the VLT observed Sagittarius A* with the NACO and GRAVITY instruments too.

This graph puts the rotation period of Sagittarius A* in relation to the time and the observing instruments: 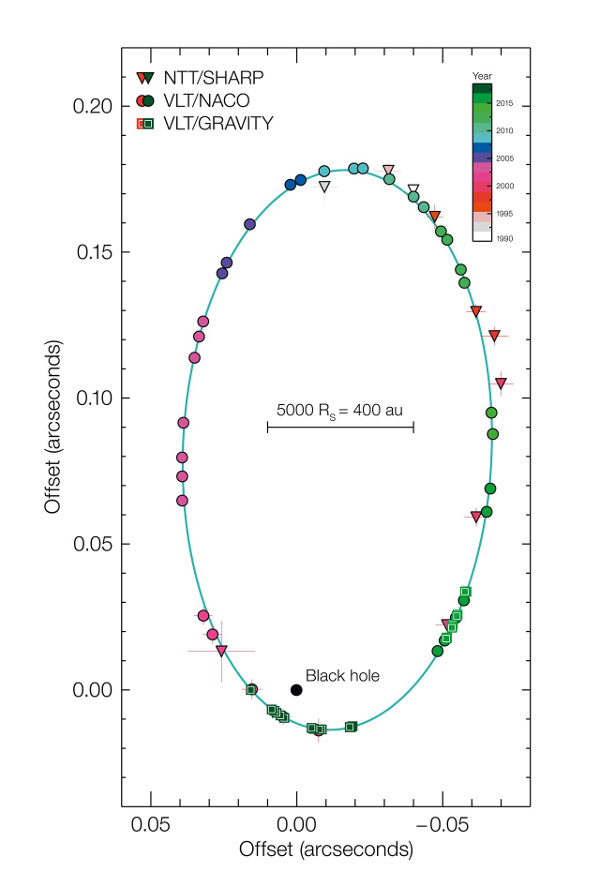 Question: What process is it that is believed to be causing that flashing?

ESO provides older footage over a minutes-timescale showing a flare of Sagittarius A* in May 2003: Flashes of light from disappearing matter

ESO Press Video eso0330 shows the detection of a powerful flare from the centre of the Milky Way galaxy. These and other adaptive optics (AO) images (with resolution 0.040 arcsec in the near-infrared H-band at wavelength 1.65 µm) of the central region of the Milky Way were obtained with the NACO imager on the 8.2-m VLT YEPUN telescope at the ESO Paranal Observatory on May 9, 2003. [...] The position of the 15-year orbiting star S2 (cf. ESO Press Release eso0226) is marked by a cross and the astrometric location of the black hole is indicated by a circle.

The cause of the flickering is probably the same for the video sequence you showed.

ESO’s GRAVITY instrument on the Very Large Telescope (VLT) Interferometer has been used by scientists from a consortium of European institutions, including ESO [1], to observe flares of infrared radiation coming from the accretion disc around Sagittarius A*, [...]. The observed flares provide long-awaited confirmation that the object in the centre of our galaxy is, as has long been assumed, a supermassive black hole. The flares originate from material orbiting very close to the black hole’s event horizon — making these the most detailed observations yet of material orbiting this close to a black hole.

ESO also has another video showing the therory with more detail: skip to about 1:00.

Flares associated with Sgr A* are also described in this answer. 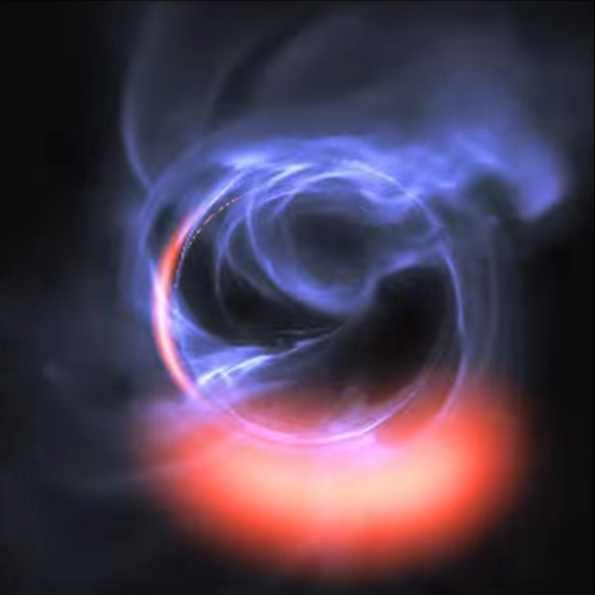 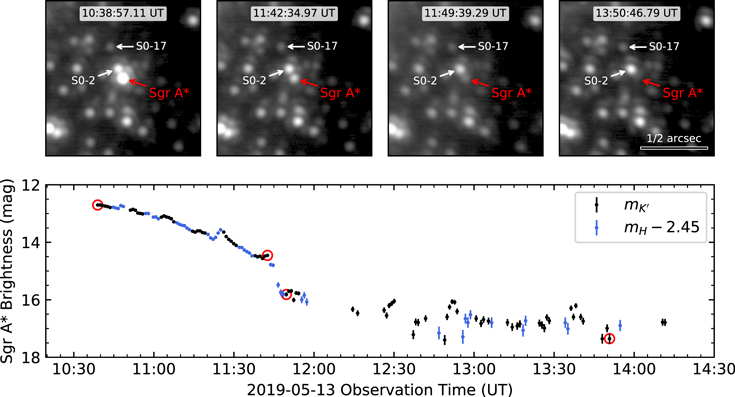 Figure 1. Top row: a series of K' images taken on 2019 May 13 centered on Sgr A* showing the large variations in brightness throughout the night. The first image from the left is the brightest measurement ever made of Sgr A* in the near-infrared. Also labeled are nearby stars S0-2 (K' = 14 mag) and S0-17 (K' = 16 mag) for comparison. Bottom panel: K' (black) and H-band light curves of Sgr A* from 2019 May 13. On this night, we alternated between H and K' observations. The H-band magnitudes are offset using H − K' = 2.45 mag. There appear to be no significant color changes during the large change in brightness. Red circles show the location of the four images in the panels above.

15
What is it exactly about these flares of infrared light from Sgr A* that "confirms" it is a supermassive black hole?
3
How will they know when to start taking the picture of the black hole at the center of the Milky Way?
4
How feasible is it that we could see the Central Black Hole Sgr A* occlude one of it's closely orbiting stars?
5
Nature and mechanism of the short-term variability in radio strength of Sgr A*?