How far above the Earth's surface does interplanetary space begin?

The Kármán line is often cited as the beginning of outer space. The Voyager probes have identified the boundary between the heliosphere and interstellar space. Is there a agreed upon definition of the boundary of interplanetary space? Is it the Earth's magnetopause?

I think that @JamesK's answer summarizes the situation nicely. Here I can summarize the way that I see space commonly sliced and diced by people in Space Exploration SE. I can't defend these as "right", but recollect seeing them typically used this way.

So to answer your question, the distance from Earth where we start calling the space "interplanetary" or not associated with the Earth or another planet begins at the Hill sphere which is about the same distance as the Sun-Earth Lagrange L1 and L2 points are.

That's about 1.5 million kilometers from Earth, and a little less from Mars, and several million miles for the "big planets"!

For L1, find the smallest value of $r$ such that:

For L2, find the smallest value of $r$ such that:

Even though Mars is 50% farther from the Sun than the Earth, it's mass is only 11% that of Earth's, so while the distances to Earth's Lagrange point are about 1% of that to the Sun for Earth, those of Mars are only about 0.5% of the distance to the Sun for Mars.

In either case, a diagram would show two dots very close to each planet. The diagrams on the internet usually exaggerate this greatly to make it easier to see.

The values for the distance from the planets to the Sun and to their Sun-associated L1 and L2 points look like this. 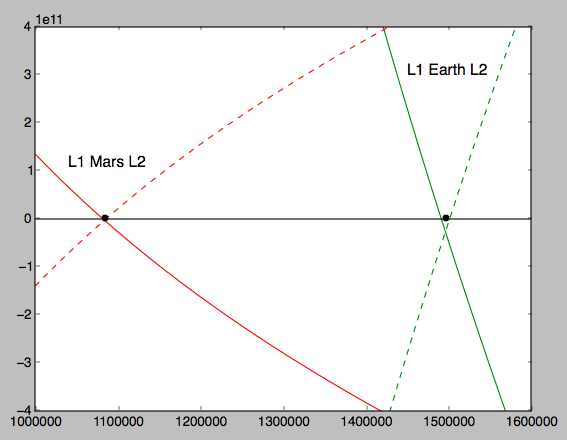 Not the answer you're looking for? Browse other questions tagged solar-system definition interplanetary-medium or ask your own question.

6
Can we calculate the average temperature of the heliosphere?
11
Why does the darkening of the Moon go from left-to-right during an eclipse?
2
How does water exist within the frost line of a star?
5
How bright are the outer planets, when at close range?
10
Best approximation for Sun's trajectory around galactic center?
1
Were there any images of a transitary event of Jupiter or Saturn as imaged by a deep probe mission
5
Are the planets Trappist-1 in the solar system?
2
Why would the interplanetary medium atomic hydrogen Lyman‐α emission fall as 1/r rather than1/r^2?
2
How is the term “solar system” defined? Could confirmation of a new planet lead to a change in this definition?
11
Are there Earth rocks on Mars?