Is the moon's orbit circularizing? Why does tidal heating circularize orbits?

The moon has an elliptical orbit (of course), but as it inches away from the Earth each year, does its orbit become more circular and how come? Io's orbit is becoming more circular due to tidal heating effects, but why?

Short answer: YES. I will assume you mean the eccentricity in the orbit of the Moon around the Earth.

In general, tidal forces in binary systems (like the Earth-Moon system, or a binary star, etc...) effect the binary in three main ways: in order of longest timescale to shortest timescale

1) circularization of the orbit (eccentricity goes to zero, binary separation goes to minimum).

2) alignment of the binary components' spin angular momenta with the orbital angular momentum (the directions of $S$ and $L$ are the same).

3) synchronization of the binary components' rotational frequency with the orbital frequency.

There's different ways of answering "why," and here is a great conceptual answer given by the God Father of astrophysical tides himself, Z. P. Zahn:

A fundamental property of closed mechanical systems is that they conserve their total momentum. This is true in particular for binary stars, star-planet(s) systems, whether they possess or not a circumstellar disc, if one can ignore the angular momentum that is carried away by winds and by gravitational waves. Through tidal interaction, kinetic energy and angular momentum are exchanged between the rotation of the components their orbital motion and the disc. In the absence of such a disc, which is the case that we shall consider here, they evolve due to viscous and radiative dissipation to the state of minimum kinetic energy, in which the orbit is circular, the rotation of both stars is synchronized with the orbital motion, and their spin axis are perpendicular to the orbital plane. How rapidly the system tends to that state is determined by the strength of the tidal interaction, and thus by the separation of the two components...

Here's a contour plot of the timescales provided by equations #$9 - 13$ from Hut's 1981 seminal paper, assuming the separation does not change much relative to the other quantities, for a binary composed of a black hole and a Wolf-Rayet star, which is a similar system to a planet-satellite system, where the timescales are parameterized in terms of the mass of the WR star and the separation of the binary: 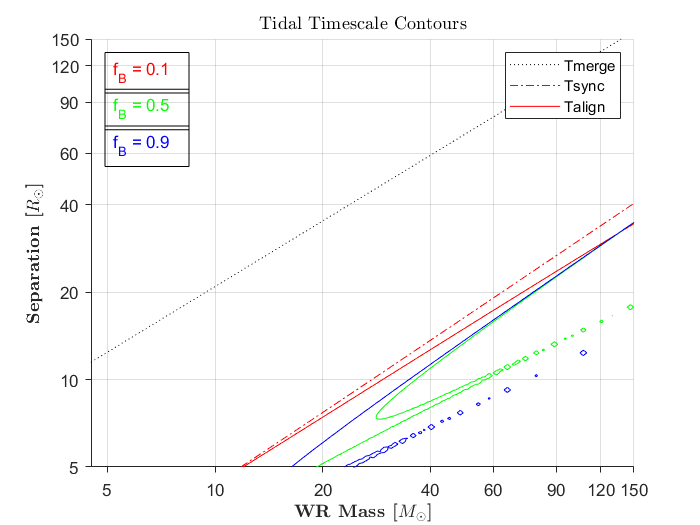 The dotted black line is the merger timescale for the binary due to gravitational waves, meaning below that line you are binary that mergers within the lifetime of the universe. The synchronization timescale is independent of the initial spin of the WR star, which is why there is only one synchronization line in the plot, but the alignemnt timescale does depend on the initial spin of the component feeling the tides. Points below the contours achieve that process (below the red dashed line are synchronized). The quantity $f_{B}$ is the break-up fraction parameter, is between $0$ and $1$, and the choice of which determines the initial WR star spin as a fraction of its break-up spin. (the tidal timescale contours were made by equating the WR lifetime with the tidal timescale). I did not include the circularization timescale because it is essentially always less than the sync. timescale (seen simply from the fact that generally, $S << L$).

Lastly, it must be said that a WR star is quite different from a moon/satellite, however the effects of tides on each is similar enough to make a conceptual comparison (since a WR star is much less massive than the BH, as is the moon than the Earth, the hierarchy of tidal timescales is the same, but you must keep in mind that the WR's apsidal response to the tidal gradient is very different than a rocky moon's).

As you pointed out, the Moon's orbit is slightly eccentric, but the moon is also tidally synchronized with the Earth's rotation (which are both sync'ed to the orbital rotation). This should make sense since it takes longer for tides to circularize than to synchronize.

I'm sure somebody can post an example of using tides in an actual planet-moon system, rather than my black hole-star system. :)

Stumbled across this a year later, but thought I'd post a simple, non-math answer.

The Moon's gravitational influence on the Earth is like that of any orbiting body on its primary, to wit that it creates a bulge in the Earth's surface, and to a lesser extent vice versa. As the Earth rotates that bulge moves around its circumference so it always points almost toward the Moon.

Because the Earth's crust is not perfectly elastic this moving deformation is never exactly beneath the moon, but leads it slightly. (This would happen even if the crust were perfectly elastic, due to the inertia of the material being displaced.) This leads to three phenomena.

The first is that some of the Earth's rotational energy is dissipated as heat. It's not much, but it's important in the last stage of tidal locking.

The second is that the slightly increased gravity of that bulge, leading the Moon as it does, pulls the Moon forward in its orbit. As it adds kinetic energy to the Moon, it tends to lift the Moon higher in its orbit. This same force pulls backward against Earth's rotation, slowing it down.

The third is that when the Moon is closest to Earth in its not-quite-circular orbit this force is greater, lifting it more when it is close to Earth. This tends to iron out any eccentricity in the Moon's orbit.

The sum total of all this is that the Earth's rotation will eventually slow down to the rate that the Moon revolves around it, and it reduces the eccentricity of the Moon's orbit. This force decreases as the two become synchronized, with the last remnant of Earth's "excess" rotational energy being lost through tidal heating so that one side always faces the Moon.

Mind you, as noted by other posters, the Sun's gravity tends to make the Moon's orbit slightly eccentric, which would eventually cause Earth / Moon to be tidally locked to the Sun, but a bit of Fermi arithmetic suggests that the Solar System itself won't last quite that long.

28
The moon has just the right speed not to crash on the Earth or escape into space. What are the odds?
4
Why circularization of an orbit has longer time scale than tidal locking?
6
How could a captured asteroid enter a circularized orbit?

2
Shouldn't all moon orbits be inherently unstable?
6
Does the Sun impose back it's tidal forces onto the Earth (such as the Earth's to the Moon)?
7
If earth changed its orbit, what would happen to the moon?
6
Does the Giant Impact Hypothesis explain how the Moon circularized its orbit?
4
Is the moon's revolution speed increasing or decreasing
24
Why is the Moon's orbit so complicated?
2
Does tidal locking also slowly reduce the orbiting body's axial angle?
10
Why does the angular size of the Moon change?