Would the solar corona be visible from the distance of the outer planets?

If the photosphere was blocked, before the sun rises on an airless moon in the outer solar system, would either the inner or outer corona be visible to the naked eye?

When the sun is about to rise for a given location is disk or photosphere is totally covered by the planet. The situation is similar to that of a total eclipse but we can't see the corona rising first because of two and at least overlapping reasons :

The corona is somehow hidden in the twilight.

If we assume the star not too far or its corona bright enough then on a planet without atmosphere the latter can be indeed seen rising. The conditions for its observation would be even better that those on earth during a total eclipse as for the skydome in this terrestrial case still receive light from the penumbra and illuminated nearby regions.

edit after I had a look at this pic that I have taken just yesterday and I realised it is related to the topic here. It makes me wonder about the nature of the observation without altering the answer above when a planet without atmosphere is concerned. 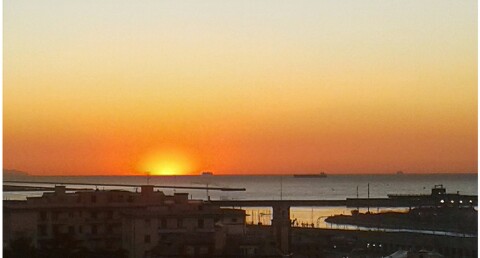 The bright spot was deep red to the naked eyes. And it was there minutes before the photosphere made its appearance! Its red tint is well explained as usual by diffusion but its brightness confuses me a bit.

Might it be indeed a corona picture superimposed to the twilight of the morning? Or is just an ill-defined image of the disk originating as in the scheme above but with an even lower (as compared to horizon) Sun? Probably this is the explanation but I wonder to observe always something new. It is not the first time that I see a sunrise :) but I never observed a sun-like bright spot lasting so long before the actual photosphere rising.

Not the answer you're looking for? Browse other questions tagged the-sun naked-eye corona outer-solar-system or ask your own question.

0
In the closest stars, can you see the stellar corona?

25
Why is the Sun's atmosphere (the corona) so hot?
6
How bright are the outer planets, when at close range?
31
Is the Sun visible from Proxima Centauri to human eyes?
9
How easy would be to see the Moon from Mars?
6
Might someone see changes to the corona during a solar eclipse?
2
How could the polarizer in early coronagraphs make the Sun's corona more visible against the daytime sky?
4
Why is solar corona in visible light filamentary?