In the picture sequence which was taken by New Horizons during the approach to Ultima Thule on the 3rd of Dec there can be seen a speck of light in the lower left corner, not as bright as 2014 MU69 but clearly visible.

Is there any theory what may have caused this signal? A particle from the probe itself, coincidentally passing in front of the lens? A variable star? A small object in the right distance and angle to be glimpsed upon by New Horizons? I think the latter would be an astronomically improbable event...

Here are some single frames of that image sequence, the speck is clearly visible on the 3rd of December.

It's probably a cosmic ray strike, a common artifact on New Horizons images. The image, however, is of very poor quality which makes it difficult to analyse the exact nature of the spot. I'll go into this more at the end of the answer.

This image contains one or more objects whose brightness exceeds the detector's saturation level. This sometimes produces a "tail" of bright and/or dark pixels to the right of the object. You may also notice a faint vertical white stripe passing through the saturated object; this is an artifact called "frame transfer smear" and is associated with the incomplete removal of signal produced when the image is transferred from the optically active region of the detector to the storage region of the detector. If the target is badly saturated, you may also notice a faint, X-shaped feature nearly centered on the object; these are optical diffraction spikes.

This image contains one or more streaks associated with cosmic rays passing through the detector. Nearly every LORRI image has at least one cosmic ray strike, but most are "single pixel" events (i.e., they only appear to be in single pixel and can easily be mistaken for stars). But sometimes a cosmic ray is energetic enough that it leaves a "trail" as it passes through the LORRI detector. 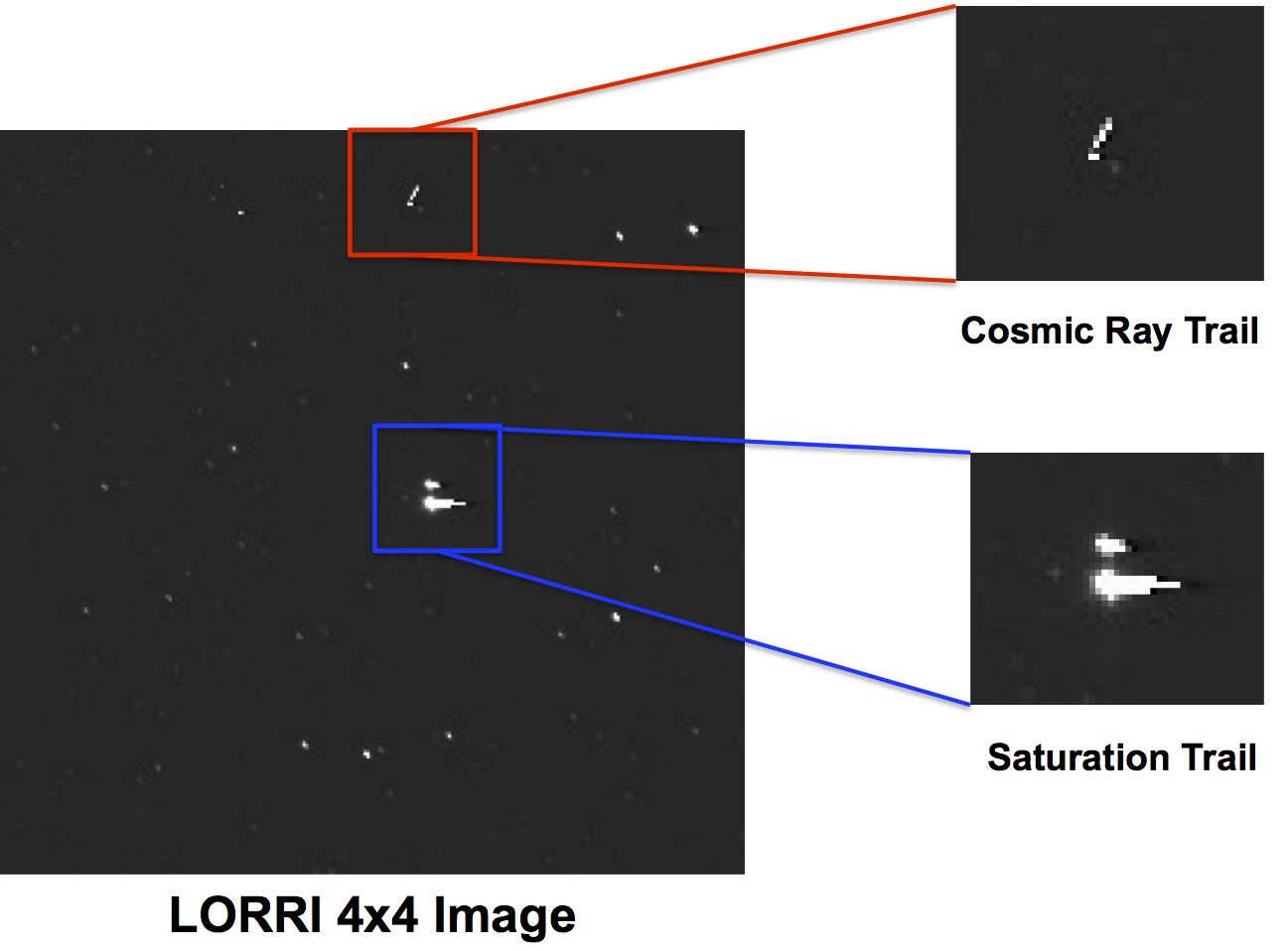 Source: here (via "Learn more..." link), NASA/JHUAPL/SwRI
Note that despite being a PNG, JPEG compression artifacts can be seen in this image

The frame in question: 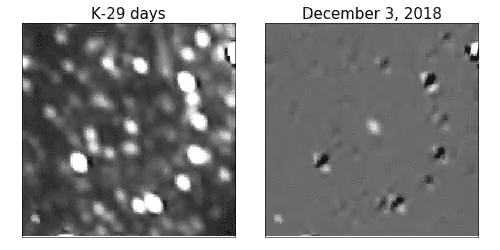 The image in question is almost certainly a stacked composite of ~10 source images and appears to have been 2×2 binned (compare here). To make faint objects more visible, the image was also likely contrast-enhanced. The image also shows clear signs of lossy compression and quantization (from 12 bits per pixel to ~5), see enlargement below. While these are (mostly) acceptable choices for the image's intended use it tends to obscure detail from the original images. 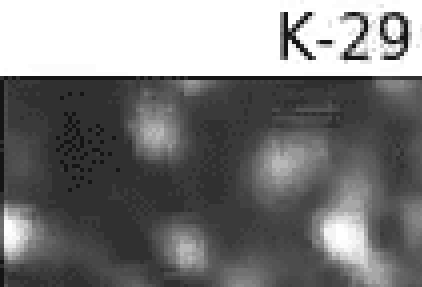 Looking at the spot in question (enlargement below) a couple of things are noticable:

It is compact and relatively dim. Its overall size in pixels is about half that of the stars and of MU69. In addition, the drop-off in brightness moving away from its center is much more rapid than for the other objects. This is consistent with a bright but compact object appearing in only one image in the K-29 stack.

This object also exhibits a less-blurry structure with two distinctly brighter spots or lines. This is consistent with spray from a cosmic ray hit.

All in all, I think a cosmic ray hit is the most likely explanation. Given the very poor quality of the image in question though it's difficult to give a definitive answer. To make a proper determination one would need access to the yet-to-be-released raw imagery.

I've seen a paper with a more thorough discussion of New Horizons image artifiacts but don't seem to have saved a copy. I'll add references from it when I track it down.

Looking closely, the spot has roughly same slightly noncircular, diffuse, extended shape and size as 2014 MU69 (optical or kinematic artifact) which would not happen from a cosmic ray or hot pixel.

This could be a real object, and simply much closer to New Horizons than MU69 is. That could certainly account for the object being visible on one day only. If its 10x closer than MU69 it can be 100x smaller than MU69 and still have a similar apparent magnitude, and the number of asteroids increases rapidly with decreasing size.

Left is object in question, right is MU69. 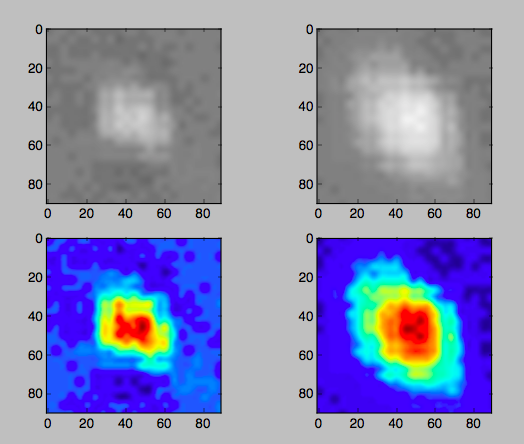 above: purely unscientific processing in order to perform "blobology": OP's image, blown up and then cropped twice (to get rid of the red arrow) then just plotted in python https://pastebin.com/8KWBHqnf

Not the answer you're looking for? Browse other questions tagged kuiper-belt space-probe or ask your own question.

7
What observations will be done during the New Horizons flyby of Ultima Thule?
15
What caused this mysterious stellar occultation on July 10, 2017 from something ~100 km away from 486958 Arrokoth?