What object in the universe is most opaque to neutrinos?

I had this thought, and my first guess was "high density = lots of absorption, so I guess it's neutron stars" but this physics.se question about that has a great answer which covers why that's incorrect.

So what object will absorb the highest fraction of neutrinos passing through it, or at least be a good candidate? Feel free to assume a certain energy range of neutrinos. Exclude black holes because they just absorb everything and that's not as interesting.

... So what object will absorb the highest fraction of neutrinos passing through it, or at least be a good candidate? Feel free to assume a certain energy range of neutrinos. Exclude black holes because they just absorb everything and that's not as interesting.

Neutrinos have amongst the smallest mass and travel at nearly the speed of light, this property, along with their weak interaction allows them to travel through all but the densest objects.

You've asked for an answer that excludes trapping by gravity, ridiculously long objects should also be excluded. That leaves reasonable sized (existing) objects of extreme density.

If the progenitor star is in the mass range 8–25 M$_\odot$ the core slowly contracts to a neutron star, and it is therefore called proto-neutron star (PNS). Once it contracts and becomes particularly dense it becomes opaque to neutrinos. It also need to release a huge amount of angular momentum, through neutrino emission, to balance the Equations of State (EoS). In the first tenths of seconds after core-bounce, the PNS is turbulent and wobbly, but during the next tens of seconds, it undergoes a more quiet, “quasi-stationary” evolution (the Kelvin-Helmholtz phase), which can be described as a sequence of equilibrium configurations.

This phase is characterized by an initial increase of the PNS temperature as the neutrino degeneracy energy is transferred to the matter and the PNS envelope rapidly contracts, and then by a general deleptonization and cooling. After tens of seconds, the temperature becomes lower and the neutrinos mean free path is greater than the stellar radius. The PNS becomes transparent to neutrinos, and a “mature” neutron star is born.

The creation of a proto neutron star is explained in "Neutrino Emission from Supernovae" (Feb 28 2017), by H.-Th. Janka. It has this simple illustration on page 4:

Fig. 2 Evolution of a massive star from the onset of iron-core collapse to a neutron star. The progenitor has developed a typical onion-shell structure with layers of increasingly heavier elements surrounding the iron core at the center (upper left corner). Like a white dwarf star, this iron core (enlarged on the lower left side) is stabilized mostly by the fermion pressure of nearly degenerate electrons. It becomes gravitationally unstable when the rising temperatures begin to allow for partial photo-disintegration of iron-group nuclei to $\alpha$-particles and nucleons. The contraction accelerates to a dynamical collapse by electron captures on bound and free protons, releasing electron neutrinos ($v_e$), which initially escape freely. Only fractions of a second later, the catastrophic in-fall is stopped because nuclear-matter density is reached and a proto-neutron star begins to form. This gives rise to a strong shock wave which travels outward and disrupts the star in a supernova explosion (lower right). The nascent neutron star is initially very extended (enlarged in the upper right corner), and contracts to a more compact object while accreting more matter (visualized by the mass-accretion rate $\dot{M}$) within the first second of its evolution. This phase as well as the subsequent cooling and neutronization of the compact remnant are driven by the emission of neutrinos and antineutrinos of all flavors (indicated by the symbol $v$), which diffuse out from the dense and hot super-nuclear core over tens of seconds. (Figure adapted from Burrows, 1990b)

Notice that the image in the lower right blocks $v$ (neutrinos).

"... [Lots of interesting information] ... [shortest possible quote] ... With neutral-current scatterings of neutrinos off nuclei and free nucleons being possible, it was recognized that the electron neutrinos, $ν_e$, produced by electron captures can escape freely only at the beginning of stellar core collapse (which starts out at a density around 10$^{10}$ g cm$^{−3}$), but get trapped to be carried inward with the in-falling stellar plasma when the density exceeds a few times 10$^{11}$ g cm$^{−3}$. At this time the implosion has accelerated so much that the remaining collapse time scale becomes shorter than the outward diffusion time scale of the neutrinos, which increases when scatterings become more and more frequent with growing density. Shortly afterwards, typically around 10$^{12}$ g cm$^{−3}$, the electron neutrinos equilibrate with the stellar plasma and fill up their phase space to form a degenerate Fermi gas. During the remaining collapse until nuclear saturation density (about 2.7×10$^{14}$ g cm$^{−3}$) is reached, and the incompressibility of the nucleonic matter due to the repulsive part of the nuclear force enables the formation of a neutron star, the entropy and the lepton number (electrons plus electron neutrinos) of the infalling gas (stellar plasma plus trapped neutrinos) remain essentially constant. Since the change of the entropy by electron captures and $ν_e$ escape until trapping is modest, it became clear that the collapse of a stellar core proceeds nearly adiabatically (for a review, see Bethe, 1990). The proto-neutron star, i.e., the hot, mass-accreting, still proton- and lepton-rich predecessor object of the final neutron star, with its super-nuclear densities and extreme temperatures of up to several 10$^{11}$ K (corresponding to several 10 MeV) is highly opaque to all kinds of (active) neutrinos and antineutrinos. Neutrinos, once generated in this extreme environment, are frequently re-absorbed, re-emitted, and scattered before they can reach semi-transparent layers near the “surface” of the proto-neutron star, which is marked by an essentially exponential decline of the density over several orders of magnitude. Before they finally decouple from the stellar medium closely above this region and escape, neutrinos have experienced billions of interactions on average. The period of time over which the nascent neutron star is able to release neutrinos with high luminosities until its gravitational binding energy (Eq. 1) is radiated away therefore lasts many seconds (Burrows and Lattimer, 1986; Burrows, 1990a).".

In the study "Observing Supernova Neutrino Light Curves with Super-Kamiokande: Expected Event Number over 10 s" (Aug 22 2019) by Yudai Suwa, Kohsuke Sumiyoshi, Ken'ichirō Nakazato, Yasufumi Takahira, Yusuke Koshio, Masamitsu Mori, and Roger A. Wendell they investigated neutrino properties observable by Super-Kamiokande up until 20 s after the bounce using the database of Nakazato et al. (2013). It includes this text and accompanying graphic: 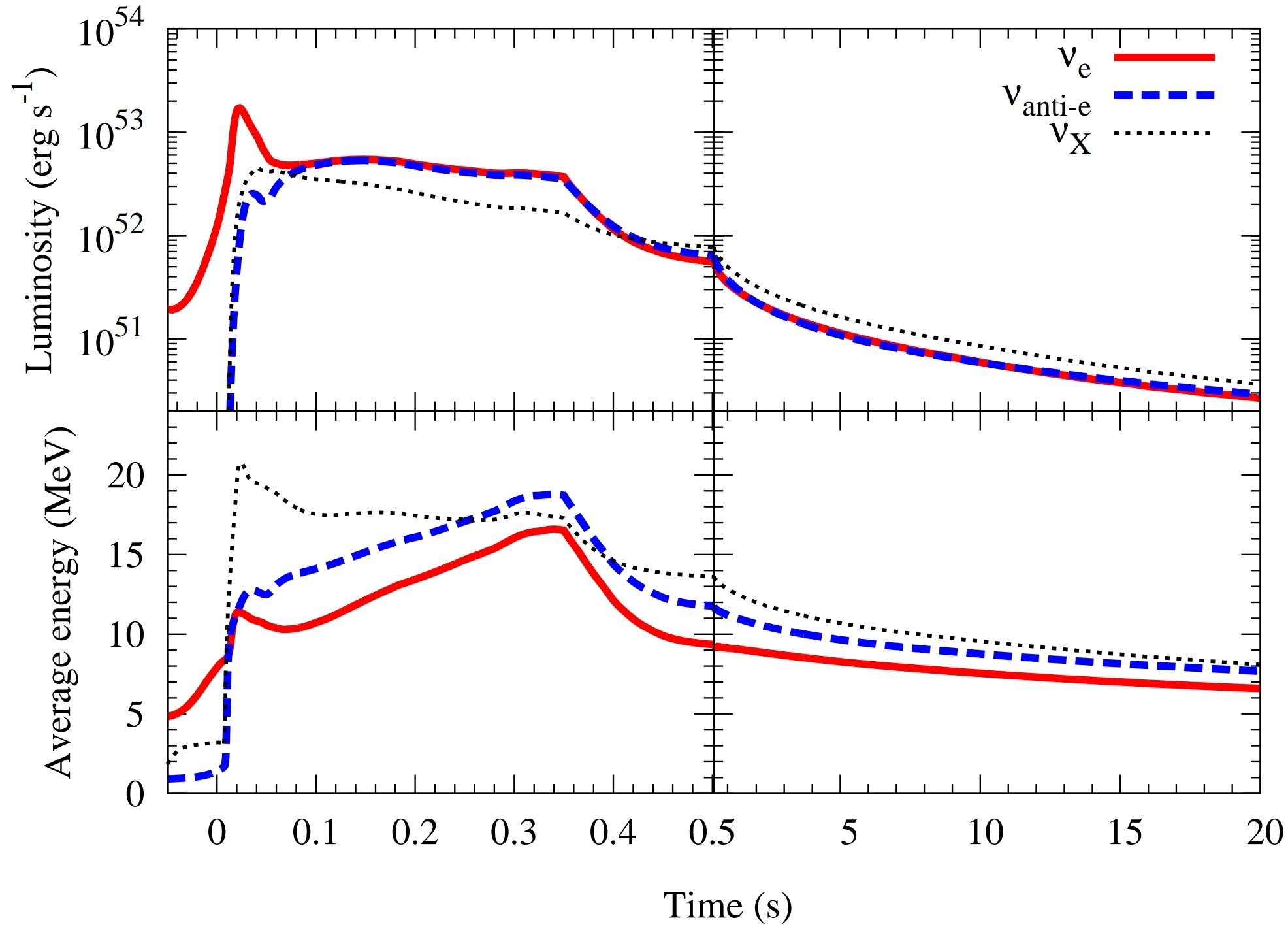 Not the answer you're looking for? Browse other questions tagged neutrinos or ask your own question.

2
Are neutrinos affected by gravity fields?
3
Do neutrinos have as much information as photons do?
10
Is the earth bombarded equally in all directions by neutrinos?
19
Multi-messenger astronomy: what is the potential of simultaneous detection of gravitational waves and neutrinos from a supernova?
8
Neutrinos passing through black holes
1
Is there any cosmological evidence that neutrinos travel at a speed other than c?
4
Star - Black Hole binary. Star core Collapses. Does the black hole immediately grow from neutrinos?
8
How are neutrinos produced in blazar jets?