I'm wondering why there is a shadow under the Yutu 2 rover, of the Chang'e 4 mission, since it is on the far/dark side of the moon. 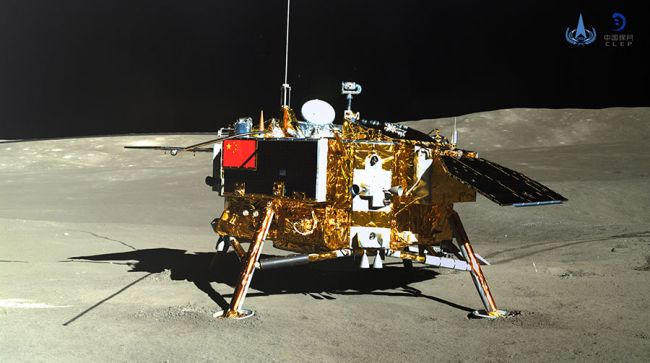 The Chang'e 4 lander, as seen by the Yutu 2 rover. (Image credit: CNSA)

Oh sorry, I just understand what is going on. Being the far side of the moon, did not mean that it's never exposed to the sun. So the Expression "Dark Side Of The Moon" is not so true.

The phrase "dark side of the Moon" does not refer to "dark" as in the absence of light, but rather "dark" as in unknown: until humans were able to send spacecraft around the Moon, this area had never been seen.[1][2][3][4] While many misconstrue this to think that the "dark side" receives little to no sunlight, in reality, both the near and far sides receive (on average) almost equal amounts of light directly from the Sun. However, the near side also receives sunlight reflected from the Earth, known as earthshine. Earthshine does not reach the area of the far side that cannot be seen from Earth. Only during a full Moon (as viewed from Earth) is the whole far side of the Moon dark. The word "dark" has expanded to refer also to the fact that communication with spacecraft can be blocked while the spacecraft is on the far side of the Moon, during Apollo space missions for example.

Not the answer you're looking for? Browse other questions tagged the-moon moonlanding or ask your own question.

25
Can you see man-made lights on the dark side of the Earth from the surface of the moon with the naked eye?
1
How significant and accessible is modern Chinese astronomy?
36
Why does the Moon appear gray when passing between the Sun and the Earth?
6
Why can I see the dark side of the moon?
2
Happy lunar new year! When will “sunset” happen for Chang'e-4 and Yutu-2?
6
Why would the Chang'e-4 lander find lunar far side temp. “colder than scientists expected”, when the LRO has already been taking thermal readings?
2
Do we know the fluctuations and constant temperature depth of the moon?
1
What are some dark features on (or qualities to) the moon?
5
How long does lunar opposition surge last? Are there measurements of the full Moon getting suddenly brighter?