How to Distinguish between Temperature and Doppler effect using Black-body radiation?

I understand that the radiation of a body can be described using the curve for black-body radiation. In the sense that a hotter body will be blue shifted and a cooler body will be red shifted.

The doppler effect gives similar results in the sense that a body is approaching us is blue shifted. While an object that is travelling away from us is red shifted.

How is it possible to distinguish between temperature and doppler effect?

If the object you're observing is something good and hot, like a star, it's pretty easy to identify a set of Ballmer lines by the relative spacing between the lines. Then compare the absolute wavelengths to the known stationary values and viola you've got the Doppler shift value.

So this would "technically" be using the blackbody radiation from the photosphere of a star to illuminate its cooler atmosphere above, making its dark absorption lines visible.

Without any other information, you cannot distinguish between the two effects.

How is it possible to distinguish between temperature and doppler effect?

The blackbody curve varies in both peak and shape: 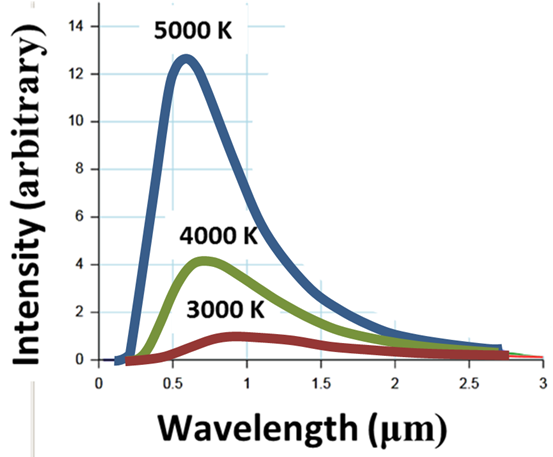 As you can see, even if you slide the curves left or right, the 5000k curve is still different than the 3000k one. The peak is at a different point relative to the curve as a whole, and especially the extinction point in the ultraviolet (around 0.2 um in this case).

At a minimum, you could compare the position of the peak to the extinction point and produce a temperature. In this example, blue has a span of about 0.3, while red is about 0.5.

So using the numbers in this example, if you were given a spectrum and measured a span of 0.3, you know it's blue. So if the peak of the curve is at 0.8 instead of 0.6 you would ascribe that to 0.2 um of doppler shifting (or other shifting effects).

Not the answer you're looking for? Browse other questions tagged star temperature radiation doppler-effect black-body or ask your own question.

4
Why Free-Free emission is regarded as Thermal emission?
2
Future redshifting and effect on the 'pitch' of CMB radiation
0
The relation between the energy of star and heating effect
2
Relationship between metallicity and color? Should Pop. I stars be blue?
5
Rule of Exception in All Nearest Objects
2
Is there still a red shift when moving perpendicular to the direction of incidence?
2
How to convert from Black body intensity to MJy/sr?
1
How to use spectral flux density data while using Planck's law giving spectral radiance?
1
Intuitive explanation for why the Doppler effect (and red-shift) happens?
0
Does photon capture in a black hole (or any other “very compact” object) reduce the luminosity/photon flux from its self isotropic emission?