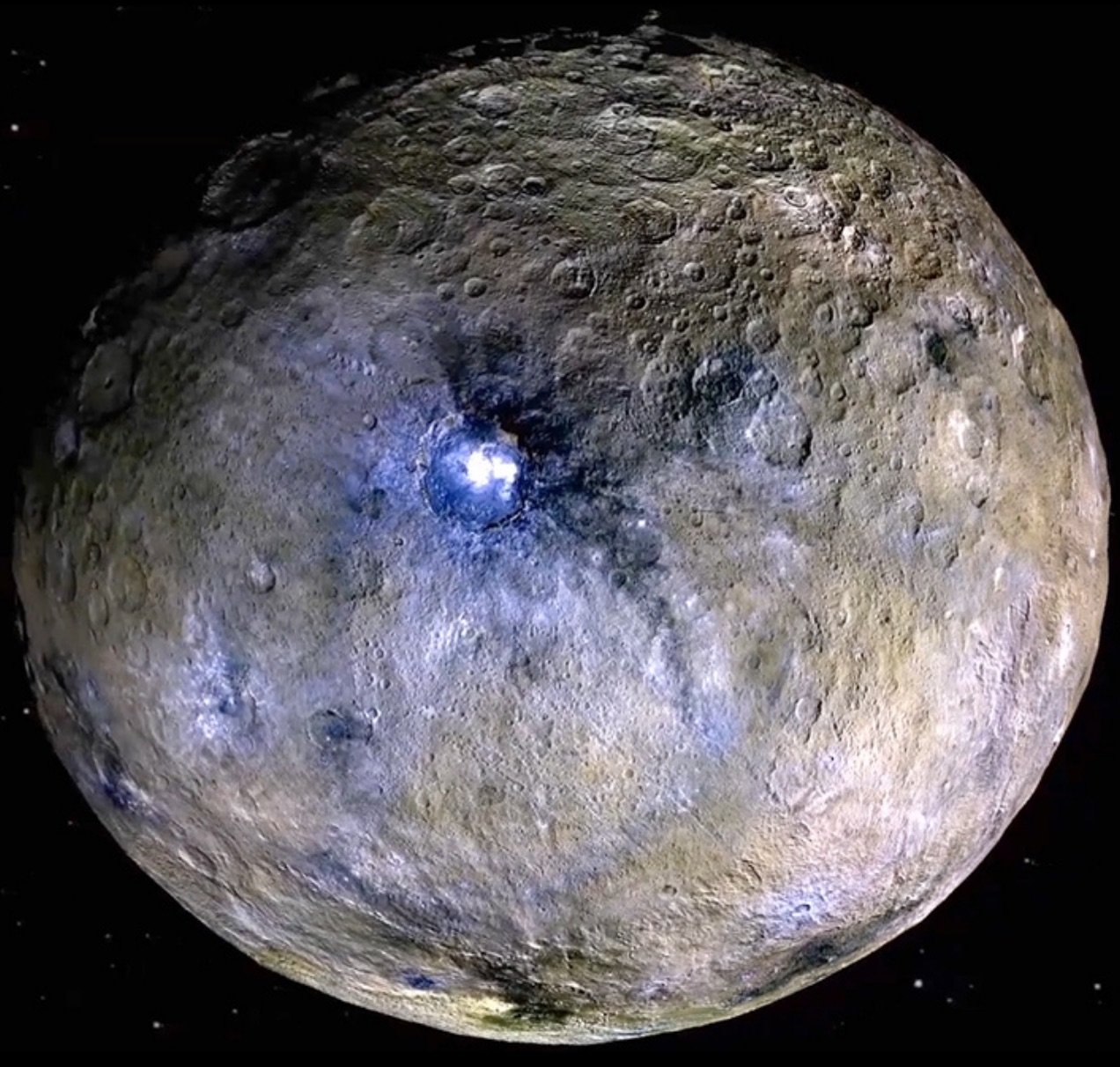 According to the Wikipedia page linked by @BowlOfRed, they're ice and/or salt.

a material with a high level of reflection, and [the scientists] suggested ice and salt as possibilities.

On 9 December 2015, scientists reported that the bright spots on Ceres may be related to a type of salt, particularly a form of brine containing hydrated magnesium sulfate (MgSO4·6H2O); the spots were also found to be associated with ammonia-rich clays. Arizona State University scientists have proposed that the bright spots are best explained as resulting from briny water erupted from Ceres's interior that subsequently sublimated, leaving behind only the salt deposits. Near-infrared spectra of these bright areas are consistent with a large amount of sodium carbonate, (Na2CO3) and smaller amounts of ammonium chloride (NH4Cl) or ammonium bicarbonate (NH4HCO3). These materials have been suggested to originate from the recent crystallization of brines that reached the surface from below.

Several papers with data from the Dawn spacecraft have just been published. Among them, Fresh emplacement of hydrated sodium chloride on Ceres from ascending salty fluids focuses on the composition of these bright deposits called faculae. It shows that the spectral data of some faculae are best fit by a mixture of ammonium chloride (NH$_4$Cl), natrite (Na$_2$CO$_3$) and hydrohalite (NaCl·2H$_2$O). The presence of the latter specie is a strong evidence for a relict subsurface ocean. Hydrohalite is actually an insulating material and could have helped maintaining some heat, thus some brine pockets.

If you are interested in the formation of these faculae (which is another question), I would recommend you to read the other papers:

In summary, impacts bring heat and fractures to the crust, which creates a hydrothermal system allowing deep brines to erupt on the surface.

Not the answer you're looking for? Browse other questions tagged ceres or ask your own question.

-4
Nature of faculae on Ceres? Do they glow in the dark?

4
How long does it take Dawn to orbit Ceres?
3
How easy is it to mine water on Ceres?
4
Is Ceres a terrestrial-type (dwarf) planet?
3
Would I actually be able to see Ceres without shining a really bright torch onto it?
4
Is Ceres in the inner solar system or outer solar system?
6
What aliphatic compounds were found on Ceres, and how where they identified?
0
What's the composition of Ceres?
2
How did the measured diameter of Ceres evolve over time?
23
If we replaced the Moon with Ceres, how close would Ceres have to orbit to cause the same tides?