Jupiter-Venus conjunction is vertically aligned. I'm at 49° N. How is this possible?

The very beautiful Jupiter Venus conjunction of ~ 2019-01-20 (practically something out of "2001 A Space Odyssey") is seen as "vertically aligned" in the dawn sky, Venus "above" Jupiter.

See this picture by Jeff Majewski at EarthSky.com to see what I mean (not sure I can copy it in here directly)

This should mean my "vertical" is aligned with the Ecliptic. I'm in northern latitudes (49° N), how is that possible?

And is this alignment geometrically linked with the "Super Wolf Blood Moon" which was very visible at the same time?

The problem seems hard to explain so here is a little free-hand drawing. 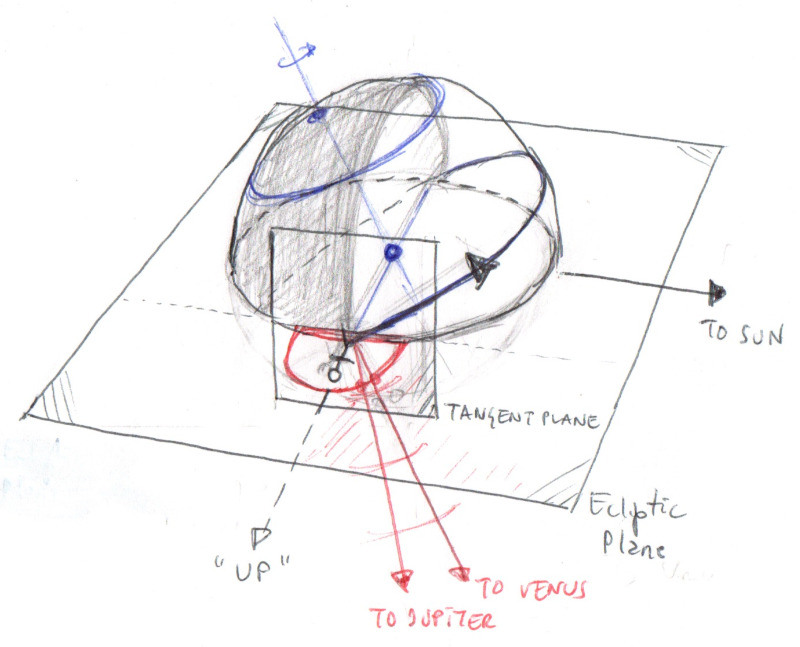 The observer sits on the equator and is just being moved into sunlight by Earth's rotation (the image shows Winter Time for the Northern Hemisphere). The observer's "UP" vector lies in the Ecliptic Plane. This being so, and Jupiter and Venus also being in the Ecliptic Plane, the observer can see Jupiter and Venus aligned "vertically" (same azimuth), separated by a couple of degrees in elevation. As the day progresses, that vertical alignment will evidently cease as the line connecting the planets rotates relative to the observer.

This works on the Equator, but what if the observer is at higher latitudes? I can't get my head around the idea that the planets can be vertically aligned while still being on the Ecliptic Plane.

A combination of several movements can lead two objects in the sky to appear vertically aligned. The planets are constantly moving relative to each other, they are orbiting on slightly different planes, the Earth is orbiting and rotating, so such configurations between planets can occur frequently.

An observer does not need to be in the tropics to see two planets being vertically aligned at some point. The planets orbit close to the ecliptic, but their orbital planes are slightly inclined relative to ours. Jupiter's orbit is about 1° from the ecliptic, and Venus is about 3°. This means that both planets can move above or below the ecliptic by a few degrees. When they pass each other as seen from the Earth in a conjunction, they are rarely on top of each other, most of the time, they are separated by a few degrees, and they are not exactly on the ecliptic line. (Such occurences of planets occulting or transiting each other do happen, but are rather uncommon: the next time Venus will transit in front of Jupiter will be on 22 November 2065) 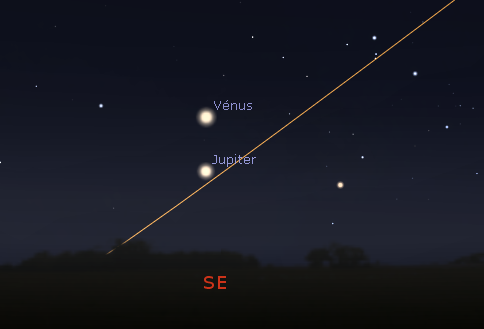 As you can see, Jupiter and Venus appear pretty much vertically aligned in the morning sky. The yellow line is the ecliptic. Note that the ecliptic does not pass through the planets here. Jupiter is pretty close, but Venus is a few degrees north of it. As both planets pass each other in the next days, at some point, their alignment will be perpendicular to the ecliptic (called the ecliptic conjunction), as we can see from this January 22 simulated image: 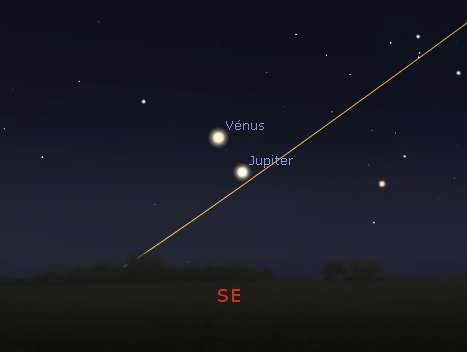 But they won't appear vertical anymore from your vantage point. (In fact, they would apprear vertical again later during that day, because of Earth's rotation, but the Sun will be up, so it wouldn't be observable directly)

A few days later, on January 26, they will appear horizontally aligned! 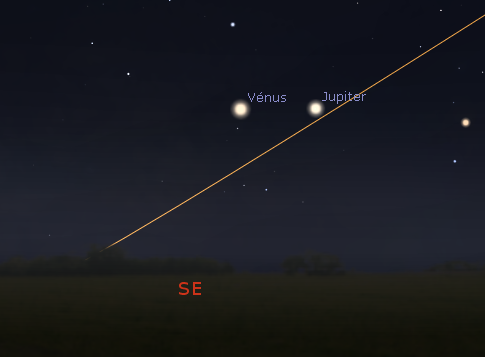 I'm even further north than you and it was vertically aligned for me at one point through that night as well, as the night sky turned

Your latitude is not really relevant. It only really matters at what time you observed it. I'm trying to find a useful picture sequence showing them moving overhead - I don't have one unfortunately, so perhaps try and imagine Orion, for example. It rotates through the sky overnight, so when Orion rises, his belt is almost vertical, with Mintaka being higher in the sky. By the time Orion is setting, Alnitak is uppermost in the belt.

And it has absolutely nothing to do with the lunar eclipse :-)

Not the answer you're looking for? Browse other questions tagged observational-astronomy alignment .

15
How would I measure that I'm at a pole?
1
How to watch at best this week's planet alignement?
8
How (the heck) was this photo of Venus at inferior conjunction (between us and the Sun) taken?
3
Venus-Saturn conjunction in Sagittarius on Dec 11, 2019 - How often does this happen?
1
How often are there five planet apparently aligned within 25°?
34
How was the mass of Venus determined?
6
Is the Object in this Photo Mars?
5
Can Mercury be seen from the 60th parallel north on Earth? Shetland, Faroe, Norway, St Petersburg, Alaska