Does water on Mars form from the atmosphere as ice free from salt? Does water desalinize through the evaporation and transpiration?

When the fresh top ice is placed in a container then pressurized to melt, would the water be carbonated?

Particulates of salt and dust is less in the atmosphere during a Martian winter so would the ice that forms be also drinkably cleaner? 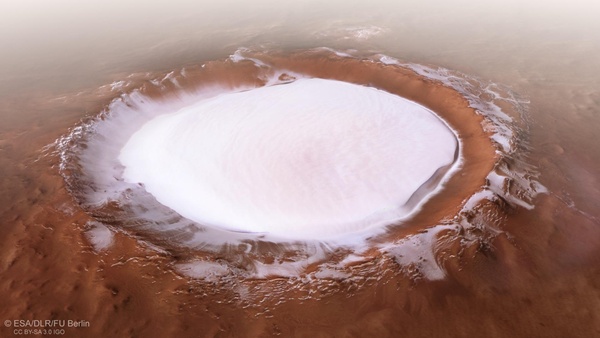 Any ice that forms from water will be free of salt -- the process of crystallization does an excellent job of removing impurities.

But that's only when freezing out of liquid water, which is not a process that happens today at the Martian surface. When ice forms out of the air, it forms as tiny crystals -- "hoar frost" we call it on Earth -- and forms on substrates, such as grains of sand. Since the soil of Mars is laden with salts of various sorts (including things a lot nastier than NaCl, such as perchlorate salts), it's hard to believe that the Martian hoar frost wouldn't be contaminated with salty sand and dust.

And, of course, the Martian atmosphere has dust suspended in it which is continually precipitating out and dust which is blown up by the not-infrequent dust storms and dust devils and all of this falls on any newly-formed frost.

It's very hard to see how there could be any macroscopic ice deposits on Mars that don't have dust and salt as impurities.

Not the answer you're looking for? Browse other questions tagged mars water weather or ask your own question.

16
How can we detect water on Mars-like exoplanets?
14
Where did Mars' water go?
2
Is liquid water on Mars such a big leap compared with ice?
11
Can Liquid Water exist on Mars?
2
How thick or deep does solid carbon dioxide accumulate on Mars?
2
Help understanding the false MRO observations of hydrated minerals on Mars
2
What are the characteristics of solid carbon dioxide on the Martian poles?
3
Any information on the salt content of Mars' atmospheric dust?