Do falling bodies ever slow down?

I've had some discussions recently about black holes, and the issue of infalling bodies taking forever to reach the event horizon. That's essentially what Einstein said in his 1939 paper on a stationary system with spherical symmetry consisting of many gravitating masses. He said "it is easy to show that both light rays and material particles take an infinitely long time (measured in “coordinate time”) in order to reach the point r = μ/2 when originating from a point r > μ/2”.

Now, I'm a big fan of Einstein. But there seems to be two issues with this:

Imagine a gedanken spaceship from which we've suspended a cable. We have clocks at different elevations, so we can measure the gravitational time dilation at each elevation. We can also release test bodies at each elevation and record the clock readings as they fall past other elevations: 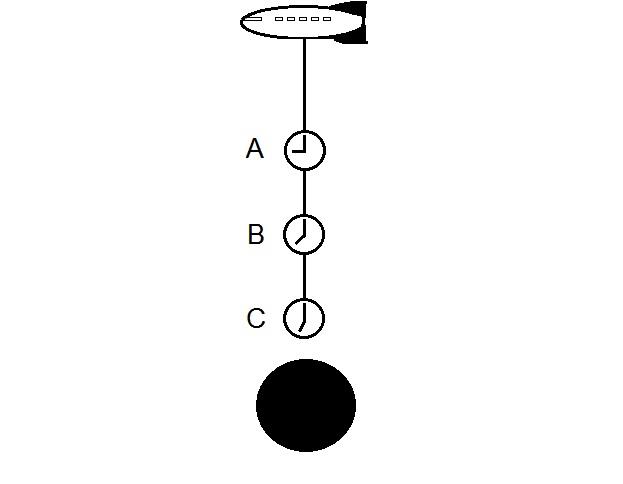 At the end of the experiment we can reel in the cable and upload the recorded measurements to ascertain how our test bodies behaved. My understanding is that we will always find that time dilation always increases as we descend, that the falling body always accelerate downwards, and that both the acceleration and the falling speed always increases as the body descends. Is this correct? Or do falling bodies somehow stop accelerating? And do falling bodies ever slow down?

According to the standard interpretation of General Relativity (e.g. as presented in "Exploring black holes" by Taylor & Wheeler chapter 3, or "Black holes, white dwarfs & neutron stars" by Shapiro & Teukolsky, pp 343-345) then yes they do. But it depends on the frame of reference of the observer - there is no absolute answer.

According to an observer far from the black hole, the rate of change of radial coordinate with time (for an object that started falling radially inwards far from a non-rotating black hole) is given by $$\frac{dr}{dt} = -\left(1 - \frac{r_s}{r}\right)\left(\frac{r_s}{r}\right)^{1/2}$$ where $r_s$ is the Schwarzschild radius and $r$ and $t$ are Schwarzschild coordinates.

If we call this the infalling speed as measured by a distant observer then we can see by differentiation that it goes through a maximum at $r=3r_s$ and that $dr/dt \rightarrow 0$ as $r \rightarrow r_s$.

However, an observer accompanying the falling particle would totally disagree. To them, their velocity is given by $dr/d\tau$, the rate of change of $r$ with respect to the time on their clock. $$\frac{dr}{d\tau} = -\left( \frac{r_s}{r}\right)^{1/2}$$ which continues to increase up to and below the event horizon.

The latter appears to admit the possibility of faster than light travel, but no more so than me (correctly) saying that if you travel at close to the speed of light you can get to a star 10 light years away in much less than 10 years (as measured on your clock).

Finally we could have the point of view of stationary "shell" observers at fixed radial distances (outside the event horizon, because no stationary observer is possible below the event horizon). They would measure the speed of objects falling past them to be $$\frac{dr_{\rm shell}}{d\tau_{\rm shell}} = -\left(\frac{r_s}{r}\right)^{1/2}.$$ This means that the reports of stationary observers (which is the gist of your question I think) at increasingly lower heights, is indeed that the velocity of the falling object is increasing as it falls.

There is no paradox to these apparently contradictory points of view. Measurements of non-local events and phenomena are not bound to agree in General Relativity, where there isn't even agreement on what is meant by "now" or whose coordinate system in what frame of reference should be used in any particular circumstance.

Not the answer you're looking for? Browse other questions tagged black-hole gravity general-relativity or ask your own question.

12
Timeline of falling into a blackhole
0
Is there a theory / equation showing whether or not two passing bodies will go into orbit around each other?
7
Can things move faster than light inside the event horizon of a black hole?
4
When you travel fast around a black hole, do you experience high speed yourself?
5
What effect does time dilation have on bodies orbiting close to Black Holes?
10
Why black holes have positive energy?
57
If two black hole event horizons overlap (touch) can they ever separate again?
14
Is the measurement of distance and position of remote celestial bodies accurate?