If the axis of the Earth was through Greenland, what would the north celestial pole be? [closed]

If the axis of the Earth was through Greenland, what would the north celestial pole be?

If you assume that the shift was due to natural process, it would still point more-or-less towards Polaris. (If the shift is due to magic or advanced technology, all bets are off.)

I think your question may be based on a false premise, that the celestial sphere is fixed relative to the Earth. It isn't at all. Over the timescales we're dealing with it's basically just fixed and unchanging.

The rotating Earth acts like a gyroscope and its axis points in some direction. To a good approximation, that direction is fixed in space due to conservation of angular momentum. So in the absence of external torques, the Earth just sits there and spins like a top.

(To a better approximation, there are some external torques and the gravitational effects of the Sun and Moon causes the Earth's axis to slowly precess. It wobbles (a bit like a top slowing down) once every 26,000 years, actually chaning where it points to in space. I think this is probably an irrelevant detail though, for your question.)

So, if the Earth's axis passed through Greenland, what would happen? (Other than the climate changes due to the polar and equatorial regions moving around, of course.)

The True Polar Wander page referred to above has an excellent diagram: 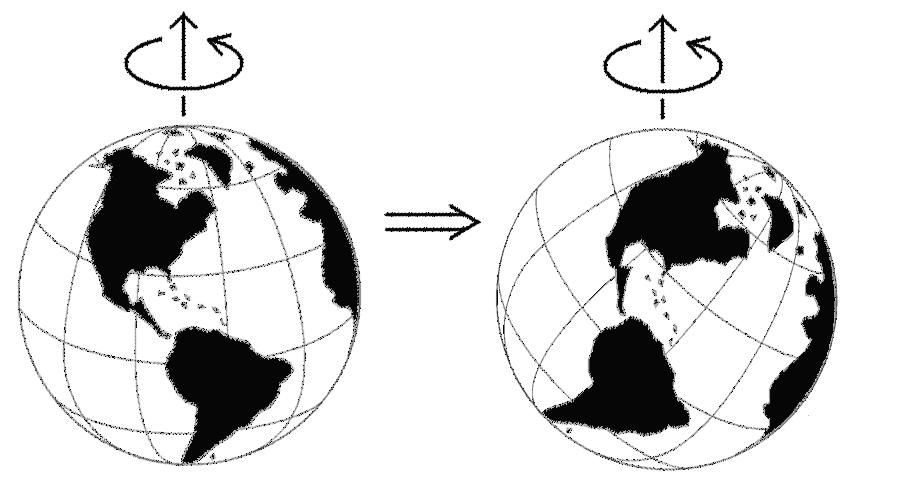 So, the answer is that if the shift occurred because of changes to the Earth's moment of inertia, the axis of rotation would still point towards Polaris. If it happened due to outside influences (a giant impact, aliens, magic) it might wind up pointing most anywhere.

Not the answer you're looking for? Browse other questions tagged star amateur-observing constellations pole or ask your own question.

4
The RA and Dec of lunar poles
1
Which constellation would appear to revolve around Denab,Vega or Thuban when axis of the earth would point toward them?
1
What would happen if a star passed through the barycenter of two binary stars?
2
How are cardinal points on horizon defined?
9
Counter clockwise rotation of storms at Jupiter's north pole. What explanations have been proposed?
2
Why do the magnetic field lines of the earth go from south pole to north pole?
6
What is the definition of a "pole" of a celestial body?
3
When (yyyy-mm-dd) does the north pole of uranus most nearly point towards the sun?