Shouldn't we not be able to see some black holes?

Whenever there is a picture of a black hole, (even though they are artist depictions, this is how they are described) most are shown kind of in a flat disk like this. 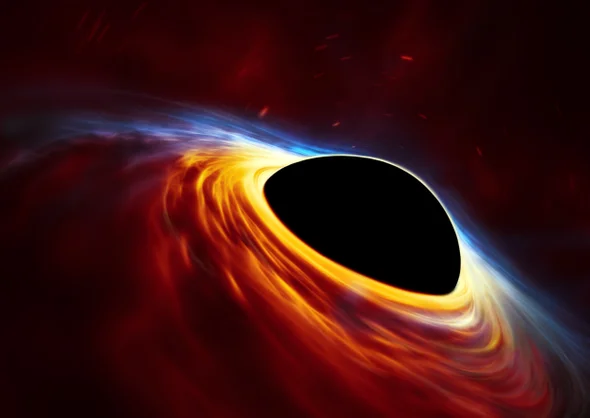 (unrevised/old post: If a black hole is spherical and has infinite density, then it would be sucking in objects from all directions because the gravity would be the same all around. In other words, the event horizon should be all around it!

I understand everything would orbit the black hole a little before 'falling in', but since the amount of matter and light is so large, shouldn't it encase the black hole, thus making it covered in a ball of light? The event horizon would be a shell so we could not see some black holes, which would mean there could be billions more out there.

As for the other black holes which we have seen/proven, if the information above is true, then maybe they are the result of black holes with poles with low force/gravity/magnetivity/energy. Possibly they could be a disk of some sort or have an unequal distribution of density, either of which could lead to the flat event horizon, maybe even both.

Poles on a black hole would also help account for the quasars shooting out of some. Since the gravitational pull would not be as great from the poles of a black hole, then this would allow the quasars to beam out (otherwise they would have to be going faster than the escape velocity, which is the speed of light).

Maybe the quasars are even the black holes that I was talking about earlier, and this is why you would see no event horizon, only a shell of bright light.

I am no expert in astronomy but if any of these theories sound plausible, please let me know! Just looking for some explanation, I thought of this earlier and couldn't figure it out, I could be completely wrong though. Thanks!)

Well it doesn't exactly work the way you describe it. Matter doesn't just fall into a black hole.

A black hole still has a finite mass, which means other matter orbits its just like it would a comparable object of the same mass, like a star. In fact the gravitational disturbance it causes in this way is usually how we determine that there are, for example, supermassive blackholes in the center of galaxies.

Now the light you speak of is an accretion disk. When a star orbits a black hole, the star can get torn apart due to gravitational variation in the star as a consequence of the nearby black hole. Matter from the star starts orbiting the black hole, but it cant just do that in any direction. Due to conservation of angular momentum (the star itself was rotating) it is forced to rotate in one specific circular path, thats what we call the accretion disk and is the reason it doesn't become a huge sphere of light. As for light itself, it can't orbit, it either gets deflected or it gets trapped inside.

It's my understanding that most matter in the universe tends to organize in a plane or some description (maybe because it's a vastly simpler orientation; or most material came from stars/supernovae, and in anything rotating in multiple directions at once those rotations sum together to be a single one).

Heck, there may be black holes out there that're currently (minus light ToF) surrounded by accretion disks. But it's far less likely to happen (how many disks do you need to cover a ball?), and you wouldn't know because you can't see it.

Only way to know for sure is to wait for such a black hole to get discovered due to its mass, and then for a bright set of disks to be seen obscuring it. (Though, with distance and a sufficiently bright disk, this could happen with just one.)

Not the answer you're looking for? Browse other questions tagged black-hole event-horizon or ask your own question.

6
Accretion disks - why are they disk-shaped, rather than spherical?