What is the difference between albedo, absolute magnitude or apparent magnitude?

Albedo is a measurement of reflected light. It varies between 0 and 1, with 0 being completely black (reflecting no light) and 1 being completely white (reflecting all light). The albedo of coal is about 0.04, which is actually very similar to the albedo of our moon. The Albedo of ice is about 0.7. Only planets and other small objects are described using Albedo because they cannot make their own light, and so its apparent brightness is due to reflecting sunlight.

Apparent magnitude can be used to describe both stars and planets. It is simply a measure of how bright the object appears to us. An illustrative example is Sirius and Canopus. Sirius is the brightest star in the sky, but it is bright because it is close, only being 8 light years away. Canopus is the second brightest star in the sky, and appears about half as bright as Sirius, but is about 300 light years away, which means the star itself must much brighter than Sirius. If we check the absolute magnitudes and do some maths (Sirius absolute magnitude = +1.42, Canopus = -5.71, the more negative the number the brighter the star, brightness difference = 2.5^(5.71+1.42)) we get a brightness difference of 680 times between Canopus and Sirius.

I've just asked Is albedo ever greater than unity? How is it calculated for various surface diffusivities and specular reflection? to get at some of those subtleties.

For stars and other objects that make their own light:

For planets, asteroids, comets, satellites (artificial and natural) and even electric cars 1, 2 that are seen in reflected light from the Sun: 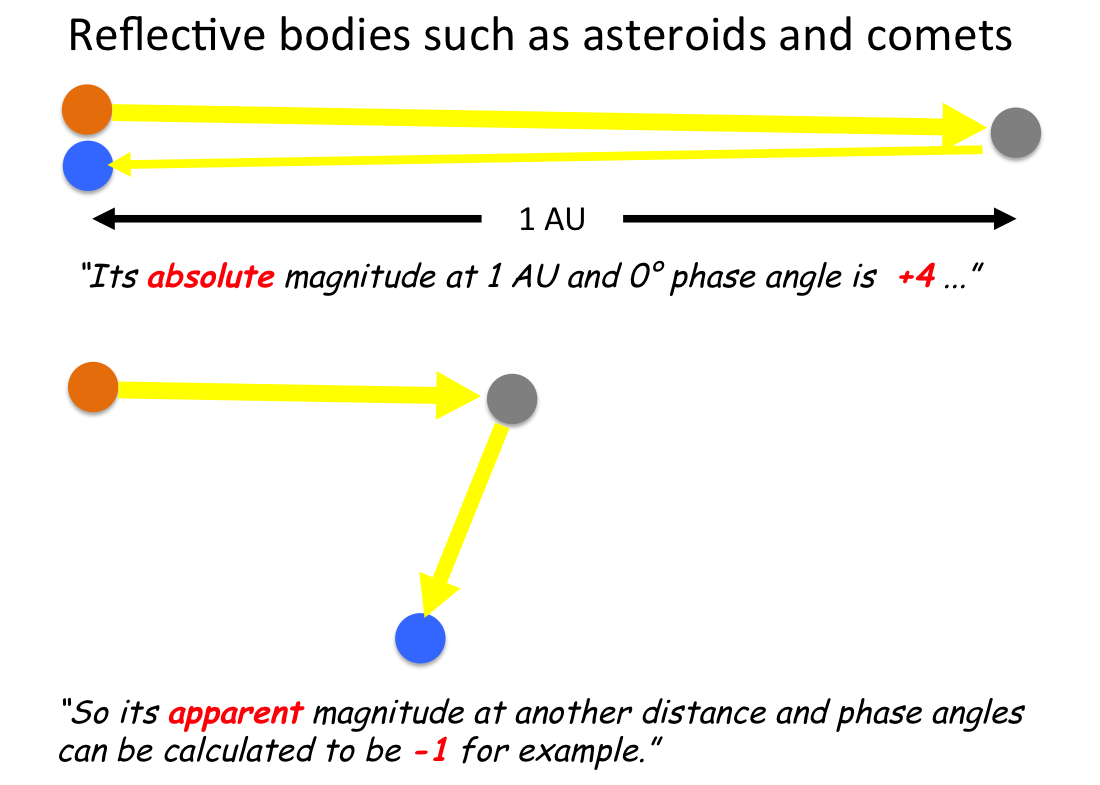 Not the answer you're looking for? Browse other questions tagged light magnitude albedo or ask your own question.

6
Apparent magnitude of Milky Way?
6
Venus' magnitude during inferior conjunction
1
Apparent magnitude of a spherical body with specular, rather than diffuse reflectivity? How bright were Sputnik 1 and Vanguard 2?
0
Is albedo ever greater than unity? How is it calculated for various surface diffusivities and specular reflection?