How to convert celestial Coordinates with a radius, to max and min celestial coordinates?

If you were working with a rectangular coordinate system as shown in the figure below (that also had no bounds), then it is correct that the right ascension would be $RA=RA_p\pm d$ (points 1 and 3) and the declination would be $Dec=Dec_p \pm d$ (points 2 and 4) where d is the radius of the circle. 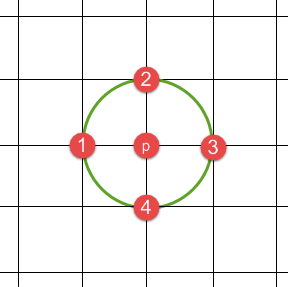 The sky is spherical, so the lines of RA are not a constant separation. (It also has limits such as declination less than $\pm 90$.) Therefore you need to use an equation for spherical trigonometry. The angle d between two points i and j is 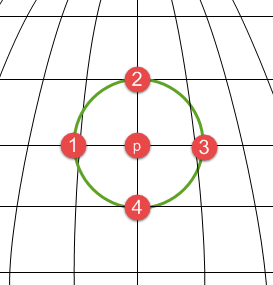 For points 1 and 3 on the circle, $Dec_i=Dec_j=Dec_p$ in the above equation, and you can solve for the difference in right ascension $RA_i - RA_j$ to be added to or subtracted from $RA_p$. For points 2 and 4, $RA_i=RA_j=RA_p$ and the above equation simplifies to $Dec=Dec_p \pm d$. Of course, keep in mind that declination is between -90 and +90. For any other point on the circle, you can assume either an RA or Dec (within the bounds of the above 4 points) and solve for the other unknown. 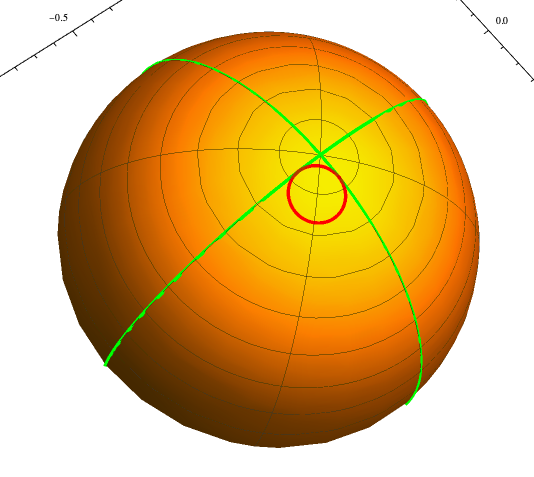 Imagine that you are at 80 degrees north and 0 degrees east (on the Prime Meridian).

It is only 10 latitude degrees from you to the north pole.

Also, the point on the 45th meridian closest to your starting position (80N 0E) would have a latitude of about 83 degrees, not 80 degrees.

The example above illustrates that the spacing between longitude lines gets closer near the poles.

In general, if you are at the position ($\delta$ north, $\alpha$ east) and you draw a circle around yourself with "radius" $\rho$, then the min/max latitude/longitude of the enclosed points would be $\delta-\rho$, $\delta+\rho$, $\alpha - \gamma$, $\alpha + \gamma$ where $$ \gamma = \mathrm{arcsin}\left(\frac{\sin\rho}{\cos\delta}\right). $$ (where $\rho$ is the angle between you and the edge of the circle as seen from the center of the Earth). Notice that

The formula can be derived from dot products between your position vector and the vector perpendicular to the either extreme meridian. I need to do a lot of visualization and to fix several false starts to get it right.

Not the answer you're looking for? Browse other questions tagged python or ask your own question.

6
How can I convolve a template spectrum with a photometric filter response spectrum?
3
Python with image in fits format
4
What is the 2D elliptical projection of the Celestial Sphere called, and how can I make one?
3
Eclipses with SkyField
2
Converting FITS (NuSTAR) coordinates to WCS
8
How do I plot galactic coordinates using matplotlib and astropy in python?
3
Galactic Equator zenith transit
2
How can I calculate the right ascension of an observer on Earth's surface in the TEME frame with python.skyfield?